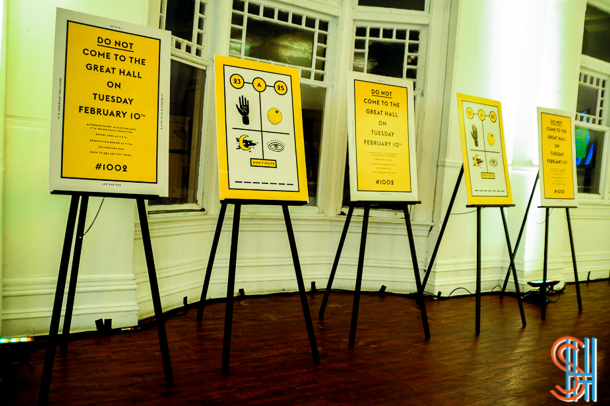 If you live in Toronto, you’ve seen the signs.

Do Not Come To The Great Hall.

But what could it all have meant? It was tipped pretty quickly that the clues on the poster were related to the proposed festival happening north of the city in Oro-Medonte. With a 350 capacity on the room early arrival was important, there was no guest list at the door, no schmoozing, no connections to get you in. After a decent wait in the cold we were allowed into the Great Hall, and given an envelope that read ‘Do Not Open’ very mysterious. Some people opened theirs and quickly found that it was a free pass to the inaugural year of the festival, which was quite the pleasant surprise.

Then it began, the 600 second countdown, which then launched into the initial line up announcement:

But there was one last thing, if you managed to resist the temptation to not open the envelope, you were told to meet underneath the moon (tacked on the side of the balcony). Then you exchanged your envelope for a life time pass for the festival.

They may not have wanted us to come, but the certainly rewarded us sevenfold for doing so.