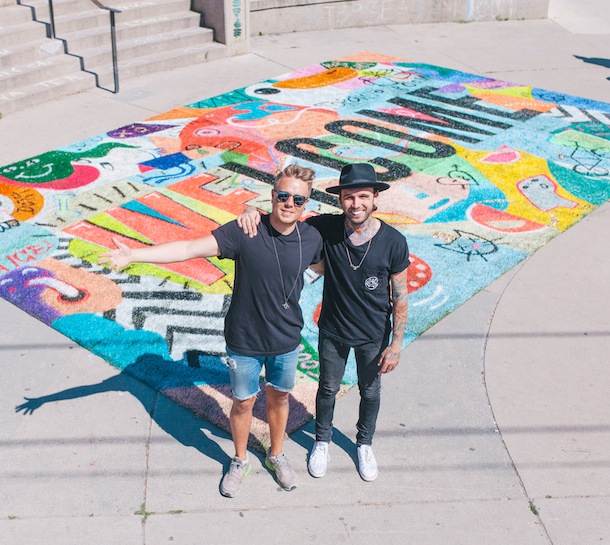 As the glacéau vitaminwater brilliantworks project continues to encourage and inspire through their creativity channel on YouTube they have released a brand new video in the series, which captures Toronto artist and designer Justin Broadbent and Skate4Cancer‘s Rob Dyer creating a very special installation in front of our favourite place for summer park hangs, Trinity Bellwoods.

Together, Dyer and Broadbent came up with the awesome idea of a massive technicoloured welcome mat to place at the south-east entrance of the park on Queen West. Painted with all kinds of cartoony influence, the mat features just about everything from skulls, ducks, bikes, ghosts, peace signs, and cats, animated with graphic words like “woosh,” “hi,” and “Toronto Boom.” Broadbent’s “81′ trademark” is also present in the piece, as is an ‘xo’ which could be seen as a nod to beloved local hip hop artist The Weeknd.

We had the chance to stop by this installation the day it dropped and loved seeing tourists and locals interact with the art as they strolled into the park. Toronto’s a great city to live in, and it’s cool projects like this that make us even more amazed by it every day.

Through the brilliantworks program, vitaminwater has already brought a giant robot with a beating heart to Digital Dreams and made Trinity Bellwoods a much more colourful, welcoming park. Who knows what super rad, or should we say, brilliant ideas they’ll come up with next! Watch this ‘welcome mat’ episode in the brilliantworks series below, followed by a Q&A with Justin Broadbent – and stay tuned for even more in this video series!

Justin Broadbent: Rob Dyer and I sat down to discuss how to make an art piece that would brighten the community. First, we had an idea to put WELCOME mats on every doorstep of a major street in Toronto. Each mat would come with a note explaining the importance of knowing your neighbour, and welcoming people into your life. That quickly evolved into a single giant welcome mat. Toronto (or the 6ix as Drake calls it), has really been pushing this concept of WE (WE the north, etc.). Right away, the WE popped out of WElcome and we were down.

JB: Trinity Bellwoods Park is unlike any park I’ve been to in the world. The closest would be Vondelpark in Amsterdam. There is an energy of hot people, pleasure, friendliness, sports(!) and true city pride. It’s also where Rob and I hang out on weekends and meet with our community. Bellwoods has also been in a bit of controversy lately surrounding the youth of Toronto. So it felt right to make peace with a giant mat welcoming EVERYONE to the park.

SH: How was the project received by the public and how did they interact with it?

JB: People seemed pretty pleasantly surprised. A lot of people asked if it would be up for the whole summer. Dogs and kids immediately ran and played on it, whereas the older folks were much more timid. A lot of smiles and a ton of instagrams too.

SH: How does this piece for brilliantworks fit into your overall body of work?

JB: I have a lot of different things (mediums) I’m interested in regarding my practice as an artist. But definitely the underlying theme is LIFE IS SHORT SO LETS ALL GET ALONG. So I think this fits quite well. I always want to brighten people’s spirits if I can. I also love the idea of creating work that interrupts your regular daily flow and makes you see something commonplace as something quite profound.

SH: Describe the synergy between Rob Dyer, yourself, and vitaminwater.

JB: Rob Dyer is an old friend of mine. I love the guy. You can’t not. I can say without a doubt, he is the most hope-filled person I have met. I think he brings the community of Toronto together even when he’s not trying. Together we are a good team. 10 or so years ago I created the Skate4Cancer logo(s) for Rob’s charity. vitaminwater was great at letting us create something beautiful for the community without having to be branded. More art projects like this need to exist.

SH: What does brilliant mean to you as an artist? Or what’s the first thing that comes to mind when you hear that word?

JB: First thing that comes to mind is Ricky Gervais. #1 because he says it a lot, and #2 cause he is. I think of brilliant as the feeling of exiting a tunnel in a car. It’s hope collected into an action. It’s about thinking of others and making work that cares for others. It’s not self-serving. It’s bold and yet chill. Also my design brain just really likes the shape of it. brilliant. 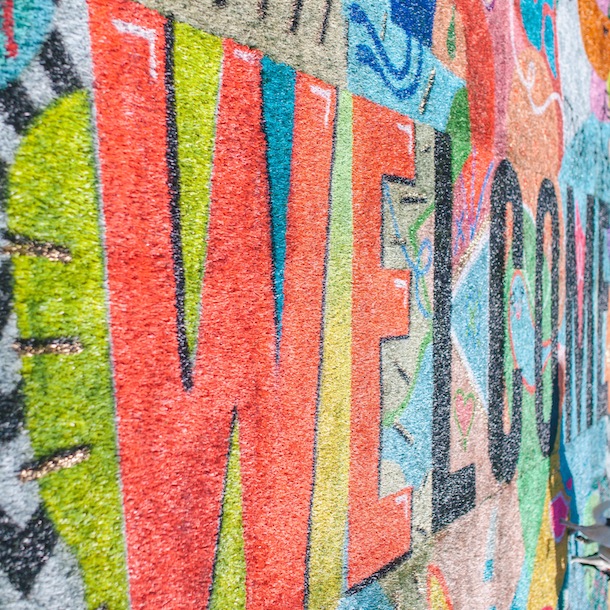