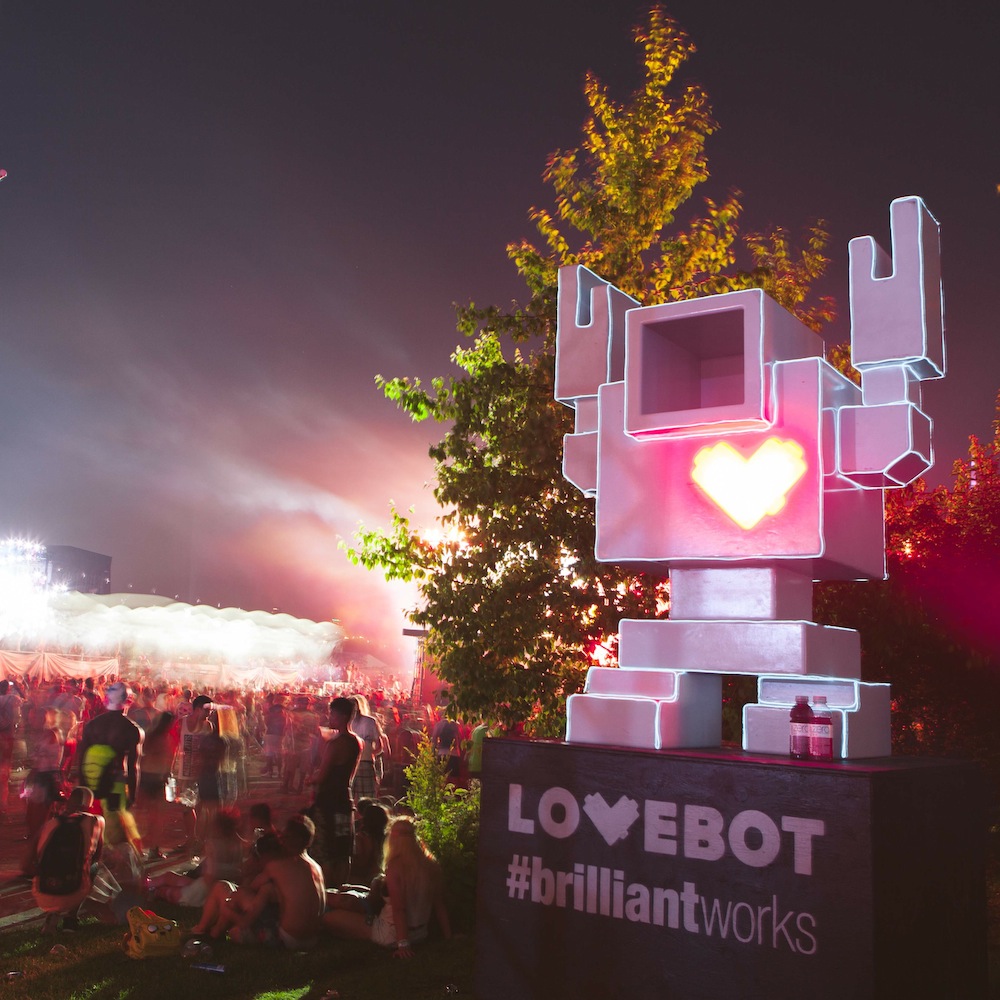 Earlier this summer glacéau vitaminwater introduced the brilliantworks program, right here in our hometown of Toronto. Their mission may seem simple, but it’s actually rather inspired: to foster unconventional collaborations and unique projects by tapping into local art scenes, with the end goal of making everyday life more brilliant. Awesome, right?!

Shared through their new, creativity channel on YouTube, vitaminwater has kicked-off their brilliantworks movement by partnering with Matthew Del Degan, who is the Toronto artist behind the wide-spreading Lovebot project. In case you’re unfamiliar with Lovebot, try taking a walk down just about any major street in Toronto and not noticing these strategically placed pieces of street art. It’s all part of Del Degan’s love invasion to remind people in our city that we’re not robots, we’re people with big hearts. Together as partners with 1loveTO’s Tyrone “T-Rexxx” Edwards, vitaminwater and Del Degan created the Lovebot remix, unveiled at this year’s Digital Dreams Music Festival, consisting of a giant concrete Lovebot with a heart that beat to the electronic music.

SIDEWALK HUSTLE: Tell us about how the Lovebot project was born.

Matthew Del Degan: In a concrete jungle like Toronto we have a lot of people working day and night, paying rent, and all sorts of expenses, and they’re really acting a lot of the time like robots. You go to a counter and say “can I have this ice cream” and you pick your ice cream and you leave, but I like to stir things up a bit, joke around, and hopefully make people feel out of the ordinary, just by messing around saying “how are you,” having a personal conversation. Because the point is that we’re not robots in this concrete jungle and I want to remind people that we have big hearts. So the purpose of the Lovebot was to illuminate the love in the city, to share love, and to prove that there is love in Toronto, and try to inspire more in the city.

The Lovebot originated from this idea I had on the subway. I looked at everyone on their cellphones with their headphones in and tuned out from the actual world, but they were using their eyes but they weren’t connecting with each other in silence. I thought to myself, we’re not robots, we’re not faceless robots; we have big hearts. So I made a faceless robot with a big heart to try to communicate the love, because the hero heart (which is its trademark) is the idea that you have a strong focal point, which is the message of the work, and the robot is symbolic of the city and city life.

SIDEWALK HUSTLE: Describe the brand synergy between Lovebot and the vitaminwater brilliantworks project.

Matthew Del Degan: It worked out really well! So vitaminwater was looking for talent, they were scouting and they needed people for their brilliantworks project and creativity channel on YouTube, which showcases a series of artworks, or brilliantworks, made by artists. They were essentially the facilitators of these artists, and I’m the first one, but there will be more. Together with Free Agency, who said, “well Lovebot’s very relevant and in-the-now, in the Toronto space” they picked me almost instantaneously.

Basically they said “what can we do together” and I said “I’ve got these big robots,why don’t we make their hearts beat” and they said they wanted to do something with Digital Dreams and vitaminwater, so we brought a giant robot with a glowing LED heart to that festival.

SIDEWALK HUSTLE: How was the Lovebot remix project received at Digital Dreams?

Matthew Del Degan: I worked for two weeks straight without sleeping very much to do it all. I went through a really big grind to get it all working in time. We had to get the heart beating to the music, we had to bring a crane in, it was really crazy.

People danced with [the Lovebot] to the music, and took pictures in front of it. There was a lot of really great interaction with Lovebot at the festival.

SIDEWALK HUSTLE: How many Lovebots are there across Toronto currently?

Matthew Del Degan: I’ve got 300 new pieces planned, which people don’t know about yet, and they’re all different. But if you don’t count the stickers and the posters, and everything else, there are about a hundred of the concrete robots. In the Toronto Star last year we said we were making a hundred, and we just finished re-making all the broken ones. So for the love invasion, the two-foot sculptures, there’s a total of a hundred, but only about 50 in the city. We’re moving in three a week for the remainder of the summer.

What people don’t know is where it comes from, it’s all a self-run initiative with my friends and family, I call them the Lovebot leaders. Everybody has their roles and tasks in this initiative and I’m essentially the director.

SIDEWALK HUSTLE: As an artist, you spend your days spreading the love creatively throughout our city. In what ways do you see that love coming back your way?

Matthew Del Degan: It’s not even a question. I wish people knew the depths of love that I receive in return. When you give love, you get love, and I wish we taught that at schools; that’s what I’m doing now. If you go to the kick-starter campaign on our website now, there’s a school pledge, so that I can go teach compassion and kindness and what you can do to be a good person. It’s not something that’s taught in school, it’s just a given for the parents to teach. When you do really, really good things for people, you don’t need to expect it in return but what will happen, if you’re a person that lives with integrity, that’s honest and kind, you’ll attract the best people toward you.

SIDEWALK HUSTLE: What do you think of the street art scene in Toronto? What would you like to see next?

Matthew Del Degan: It sounds funny, but as a designer (who graduated with a degree in product design) everybody tries really hard to create a concept or a vision or idea for an object but I always want to tell everyone, make it shiny, make it glossy, make it fun, make it a robot, make it a dragon, make it what people like.

People are fairly simple, depending on how you look at it, so say, if there were giant dinosaurs pacing up and down in Toronto, people would love it, who doesn’t like giant dinosaurs? They’re magical. Or zombies or aliens? I almost wish I had some competition in Toronto, it’s a call out to anyone who’s willing to compete, I’d love to see another character that’s a symbol of love and kindness.

The problem with the street art world in Toronto is that we’re not on the global stage, we’ve got a lot of graffiti and a lot of art, but we don’t have a Space Invader, an Obey or a Banksy, that represents their country. Here everybody’s on the ground level.

Toronto wants to be a global city, and it already is, but it’s not existing as a global city in the street art world. 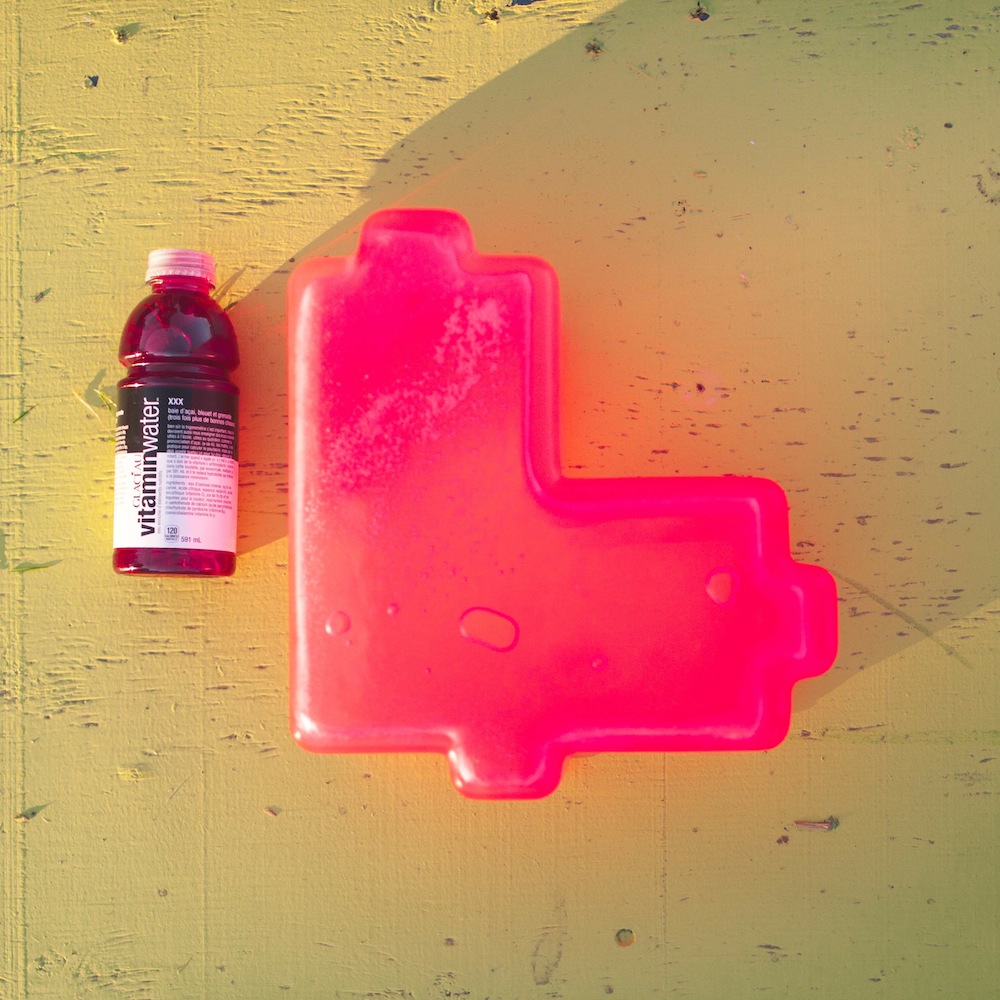