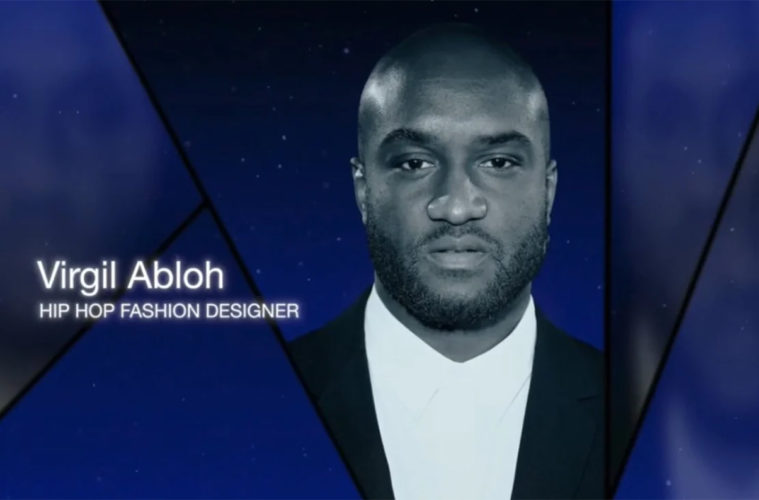 So what the actual fuxk.

In an ‘In Memoriam’.

Like ‘hey, sorry to see you passed, cause people seem to care, though your life’s work wasn’t worth a google to me, if I’m honest’.

Never mind the fact that this is a body that previously honoured him for Art Direction. For his cover for Jay and Ye’s Watch The Throne record. They know he had at least one hyphen. And should have known more.

These bodies aren’t exactly known for their cultural or racial sensitivity. But they should do better.

I think Will Smith is a fuxking dumbass. But if it was Sean Penn or Johnny Depp people would have been throwing around the word irascible, with a ‘knowing’ smile and a slight shake of the head. And Amy Schumer for damn sure wouldn’t be talking about how ‘upsetting’ it was if it was a white dude. Trust.

Furthermore, what in the world is a ‘hip hop fashion designer’?

How we trying to reduce an entire genre, one of the most prevalent and wide-reaching in the world, to a single aesthetic?

Like, do we honestly see an aesthetic connection that coalesces across hip hop?

Let alone G Dragon or Verbal. Neither of whom are Capone N Noreaga hip hop, but both of whom are definitely hip hop.

Pharrell doing Channel collections. Verdy doing skate kicks that look like Fragment does Fredericks of Hollywood. And G-Eazy look like a high school kid at the Mall of the Americas going through a cholo phase.

You can’t parse this in that manner. It’s just silly.

Pyrex Vision was definitely scammer-friendly aesthetics before that was a thing. OW was avant-street in a way that only Tokyo was doing until Virgil recontextualized. He had a Masters in Architecture from IIT. One of the world’s best programmes. On a campus, by the by, entirely designed by Mies van der Rohe, and considered one of the foremost examples of the post-Bauhaus International style of architecture.

Virgil was feted by the hip hop world, to be sure. But also by architects, industrial designers, fashion designers, philosophers, and the global creative world at large.

Imagine being the Artistic Director of Louis Vuitton. With a holding deal to collaborate with literally every single LVMH brand (LVMH, broadly speaking, translates to ‘if you can’t afford it we prolly make it’). A man with co-signs from Mercedes Benz, Evian, Moët et Chandon, Takashi Murakami, et al ad nauseum. And being called a fuxking hip hop designer.

Of course this is just blanket reductivist racism. Of. Fucking. Course. It. Is.

Shayne Oliver might be the single most avant-garde outre fashion designer on earth (yeah I know there’s literally hundreds of candidates for that title), but I’ve heard him described as a hip hop designer dozens of times. Cause Arca hood af right?

Kim Jones is the Creative Director at Dior Homme, and the Artistic Director at Fendi, for women’s collections.

But, to my mind, he’s much more dialled in/inspired by hip hop than Virgil ever was. I’ve had rather enthusiastic discussions with Virgil about the furniture of Borge Mogensen and about Magritte’s early stage Dadaism (Ceci n’est pas un pipe-era). But never did Big L versus OC come up.

Kim, on the other hand, has and always will be monstrously fidel to hip hop/skate aesthetics. He pushed for the ‘preme collaboration hard while he was artistic director at LV menswear. His collaboration choices at DH have perpetually disappointed me, in that they promulgate cats who already have major platforms on their own, but you see his love of the culture when he taps someone like Kaws or Yoon. That same time frame Virgil was pushing Playlab’s graphic design experiments and Family’s architectural works. DongPing and Iona are monstrously talented. So is Archie Coates. But they don’t skew hip hop.

Marshall McLuhan said that the ‘medium is the message’. Despite the extraordinary prescience of that statement at that time, it no longer holds water.

Today, the metier is borderline medium-agnostic, and the message is the message.

That was a man who shouted at the rain, because he genuinely believed that amplification was, in and of itself, its own reward.

Rest in Power. Fuxk what you heard.