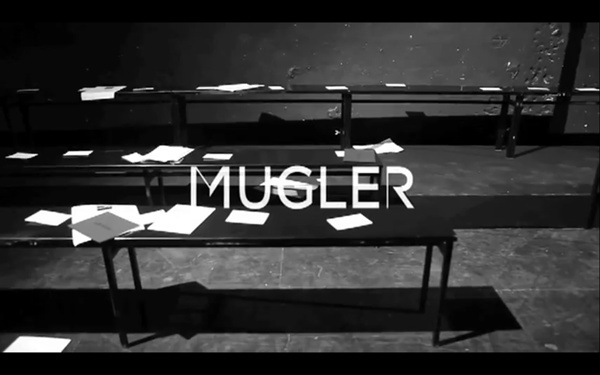 In his quest for MUGLER to be ‘Fashion Without Frontiers’, Nicola Formichetti, in collaboration with Mugler’s head menswear designer, Romain Kremer, created a collection that expands the idea of male heroes and clothing archetypes through cut, fabric and silhouette. An idea of masculine uniform predominates – ranging from ceremonial vestments to the Marines – exploring how much of men’s formal evening dress can trace its roots back to such uniforms but also how it is a uniform itself.

The music for the presentation is a new track and vocal by Azealia Banks, specially commissioned by Nicola Formichetti for the show.

The film footage was captured during a 4 day, 24/7 live broadcast from the MUGLER atelier leading up to and after the show.

Opening up the whole preparation for the show and broadcasting it live via Ustream on the official Thierry Mugler Facebook page within the last week was an unusual move – but one that proved successful.