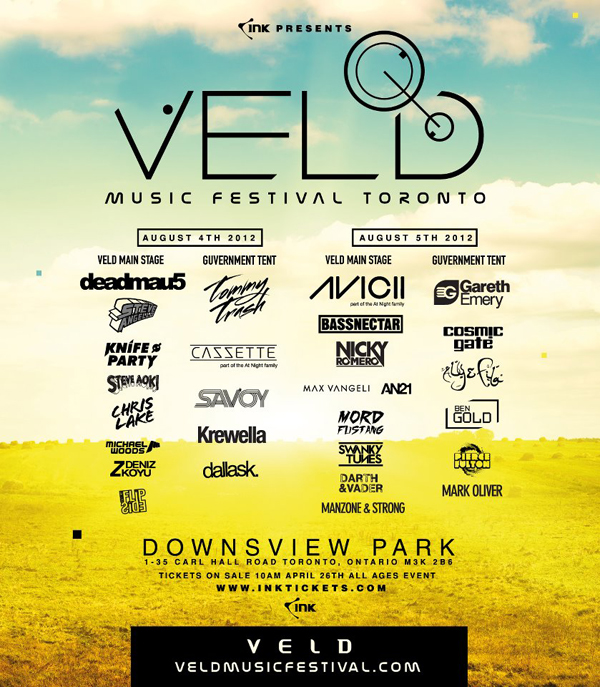 Now, Electronic Dance Music is not necessarily my favourite genre, but I definitely have a couple of favourites and I do love a good dance party. So I am overjoyed to see that the Toronto music scene has stepped up their game and is now playing host to (arguably) the biggest EDM festival in Canada. Featuring an unprecedented, globally acclaimed musical line-up, VELD – a word that means ‘wide open space’ – will touch down in Toronto at (the awful) Downsview Park on August 4th and 5th, 2012. Now, Toronto has played host to several music festivals in it’s past but nothing of the potential size that VELD promises to be. With an expected capacity of well over thirty-thousand people Toronto has a good chance at becoming the center of a new EDM renaissances.

This lineup is really impressive, especially if you are a fan of EDM, and the price-point is crazy affordable. The average price for the ticket is looking to be about $175, give or take which again for a two-day festival is almost certainly unheard of. Hopefully this price point lasts in the coming years. For me, the wishy-washy EDM fan, the names that stand out most are Deadmau5, Knife Party, Cazzette, Bassnectar, and Mord Fustang. But the lineup also features Swedish House Mafia’s Steve Angello, Avicii, Steve Aoki, Gareth Emery, Tommy Trash, Savoy, Krewella, Swanky Tunes, and a TON more which will certainly offer up an incredible party. Keep your eyes peeled at VELDMusicFestival.com where tickets will go on sale at 10am on Thursday April 26th. See you on the dance… field.