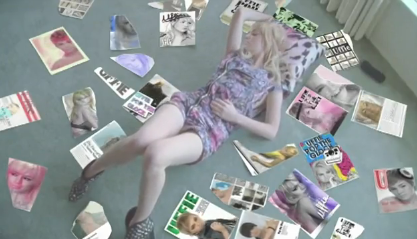 Check out the new and somewhat sleazy video for “Pop the Glock” by Ed Banger Records prodigal daughter, Uffie.  Uffie, born Anna-Catherine Hartley, has quickly become the euro-Princess superstar with her electro-rap club bangers.  After watching this video, several times I decided I would go ahead and actually learn something about Ms Hartley, and was not surprised in the least to find out that she is an international globe-trotter from Miami who settled in Paris to study fashion… Check the American Apparel ad for a video.  Oh and yes that is French graffiti artist André Saraiva drawing his world famous Mr. A on her back at the end of the video. Uffie’s debut album, Sex Dreams and Denim Jeans will be released in early 2010.  The video was directed by Nathalie Canguilhem.