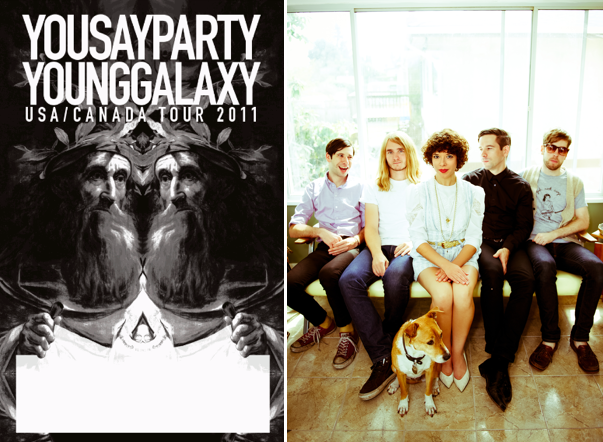 Coinciding with You Say Party’s brave return after the shocking death of their late drummer Devon Clifford, the 23-day tour leaves us delighted the band decided to soldier on in their great friend’s memory after such aÂ devastatingÂ loss.Â Admittedly, we were a little bit worried last year they weren’t going to come back and were relieved to hear about their come back with Young Galaxy on board to promote their much-buzzed albumÂ Shapeshifting, produced by Dan Lissvik and set to drop next month viaÂ Paper Bag Records.

You Say Party has added Robert Andow on keys and Al Boyle on drums to their line up and recently dropped a really well done video for “Lonely’s Lunch” from their album XXXX which was nominated for the Polaris Music Prize alongside Young Galaxy and recently won Best Rock Album at the Western Canadian Music Awards.

Check out the full tour dates, watch the rad video for “Lonely’s Lunch” below from YSP and be sure to catch them live in Toronto on March 4th at Lee’s, when they’ll share the stage with Young Galaxy.