Toronto, We Love You, and Here’s Some Reasons Why

Marky Mark has called Toronto a “tastemaker town” and that if you make it in Toronto you can make it anywhere.

Prince called Toronto a “real melting pot in every sense of the word” and “there’s all sorts of people everywhere you go.”

Canadian poet Rupi Kaur may have a fond liking for B.C., but said: “Toronto is the greatest place because every corner of the world is here.”

Toronto has its own barometer to work and culture and we’re proud to be living in it. In September alone Toronto drew over 1.4 billion in investments from both Canadian and American companies. A study from CBRE Group Inc. showed that more tech jobs had been created in Toronto than in Seattle, Washington D.C. and the San Francisco Bay area, combined, in 2017. CBRE also noted that 28,900 tech jobs were added in Toronto in 2017. 2018 stats could soon mirror these findings or bump ahead of them.

MaRS, the city’s premier incubator, tech and innovation hub, has helped foster growth and capital for startups like Cluep (which was acquired for $53 million) and Flexiti Financial, which secured $80 million in 2018. This year MaRS announced the opening of a 400,000 square foot Waterfront Innovation Centre, too, designed to further partner businesses with VC’s and other collaborators. The WIC is set to open in 2021 and will house 3,000 tech workers.

MaRS was also one of the founding partners of Elevate and we recapped the 2018 event here. 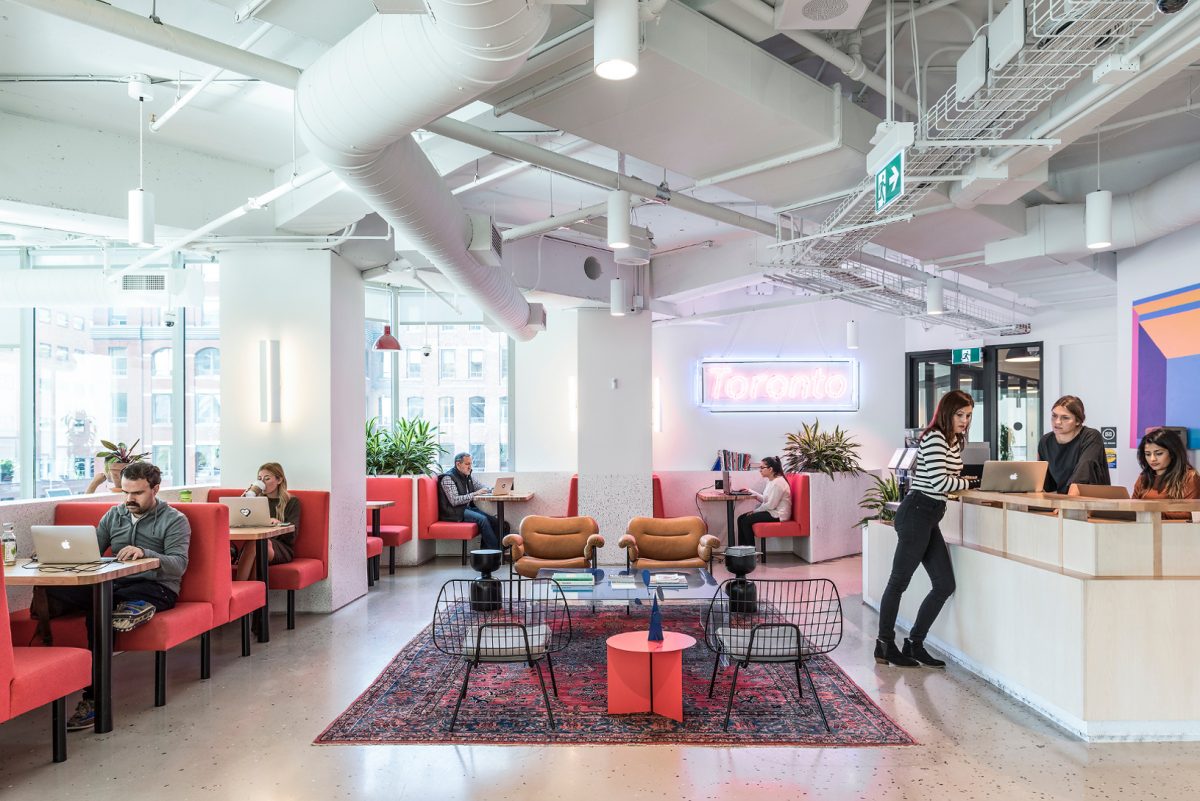 WeWork continues its expansion in Toronto, opening its fifth location on December 3. Scotia Plaza (40 King St. W) will house over 800 desks and adds to WeWork’s roster of work pods that first popped up in the city in August 2017. The NYC company expects to have 20 sites in Toronto by the end of 2020.

As of November, WeWork Labs is in the city too, meaning more help for early-stage startups (30% of Fortune 500 companies are WeWork members). Toronto is now part of a community of 14 WeWork Labs that operate in 12 cities across the globe.

In June, WeWork and the City of Toronto partnered to start the ‘Toronto Startup Passport’, which allows Toronto-based entrepreneurs the ability to use a network of WeWork’s sites in cities around the world. Toronto-based entrepreneurs associated with MaRS Discovery District, the DMZ, the U of T Entrepreneurship and York University get access to any workplace once a month at any of WeWork’s 274+ locations as well access to programming (panels, events) at WeWork spaces. Entrepreneurs can also host their own events and can book and pay for a workspace on an “as needed basis” following the first complimentary booking.

Innovation and investing continue to ripen the Toronto landscape and with companies like Microsoft making $570 million in investments and creating 500 new full-time jobs, 2019 looks promising. In addition to Microsoft, Pinterest is opening new headquarters here, Uber is launching an engineering hub (investing $200 million locally), and Shopify will open a new Toronto office, announcing up to $500 million in investments in the city.

Hxouse officially opened on November 6, marking a major moment for Toronto creatives. The venture is owned and operated by the XO crew: Ahmed Ismail, Lar Mar Taylor and Abel Tesfaye, a.k.a The Weeknd. The next-gen incubator and accelerator ushered in the opening with a two-day “Open Hxouse” launch, featuring performances from The Weeknd, Bryson Tiller and The Neighbourhood, among others.

Hxouse space runs 30-000 square-foot and was designed by the collaborative Toronto non-profit Artscape as well as Daniels Corporation. Inside there are recording studios, editing suites and the necessary resources to get projects moving. Partnered with George Brown College, Hxouse’s minimum age to apply to its program is 18. All applicants must live within one hour commute from Toronto, and those accepted will get a chance to work on XO projects and other projects through Hxouse Creative Studios. Twitter Canada will provide mentorship, resources and guidance into workplace opportunities. The program’s first run starts in January 2019. More here.

2018 saw new restaurants like Quetzal open up, which is now a go-to of ours. Exhibitions like Louis Vuitton’s ‘Time Capsule’, Yayoi Kusama’s exploration of time and space in ‘Infinity Mirrors’, and Hyghly Alleyne’s (XO Records) debut, were all well received.

Deadstock Depot continued its appreciation for vintage resells in the city in 2018, and Robert De Luca transformed the inside of a laundromat to create #TheSix mural, a first for the Toronto artist and musician. De Luca clocked over 940 hours working on the mural, which sees hundreds of pop culture references connected to Toronto.

The Toronto Raptors unveiled the new 2018-19 season NBA City Edition this month, which is necessary knowledge for Torontonians to know. In the middle of the white jersey (a switch from last season’s black jersey) is a large gold chevron and the letters spell NORTH across the front. These special OVO-edition jerseys are part of the collaboration between Drake’s OVO label and the Raptors and furthers the ‘Welcome Toronto‘ initiative.

Taking to the ice, the Toronto Maple Leafs certainly beefed up their team this year. Some think Leafs’ centres Auston Matthews and Toronto-native John Tavaras could dethrone the supremacy seen over at the Pittsburgh Penguins with Evgeni Malkin and Sidney Crosby. It. Could. Happen.
Also, this:

The inaugural Move the Dial Summit took place in November, marking a milestone for a movement that’s focused on enhancing women’s efforts in technology. Held at the Telus Centre in Toronto, the Summit featured speakers like Google Canada’s country head Sabrina Geremia, seed-stage funders and Toronto advisors like Candice Faktor (Faktory Partners) and panellists with Toronto entrepreneurs like Eva Wong, who co-founded and is the COO of Borrowell. It housed national and international leaders like Diane Kazarian from PwC Canada as well as captivating conversationalists like Amber Mac and Bea Arthur. The name “Move the Dial” came out of a technology mission trip to Israel in 2016, which was led by Mayor John Tory and Montreal Mayor Dennis Coderre, along with a handful of Toronto city councillors. After listening to certain female speakers talk about their plans to look for funding in the United States, Toronto native Jodi Kovitz, founder and CEO of Move the Dial, suggested they make a stop in Toronto.

“Come on into Toronto and I’ll see what I can do,” Kovitz, a former lawyer, recalls to us. When the specific entrepreneurs asked, “Why would you want to do this for us?” Kovitz said, “I just want to move the dial for you.”

Kovitz also recalls going up to Mayor Tory while he was having breakfast with his wife, asking him to write a letter back to her daughter who had sent a note asking the mayor to ban smoking. “I was shaking in my boots, but I did it. It was one step of a little courage,” says Kovitz. Following that and the trip to Israel, Kovitz vowed to make Mayor Tory even more “proud of how Toronto looks” and Move the Dial was formed.

As for her own Toronto connection, Kovitz swears by Rocket Cycle (“It’s where I find my strength, my power and belief in myself.”), Barque (“David Neinstein is a tremendous cook and a guy that believed in the beauty of a dream and made it happen.”), and every year Kovitz can be found gazing at the cherry blossoms in High Park.

The famous El Mocambo sign is back in #Toronto in the heart of Chinatown where it belongs pic.twitter.com/U3n15zPG5E

And lastly, for now, let’s not forget about the cultural landmark that was, and will be again, the El Mocambo. Check out the neon palm tree being moved back to where it belongs.

As of November 16, the Elmo is officially back in business.