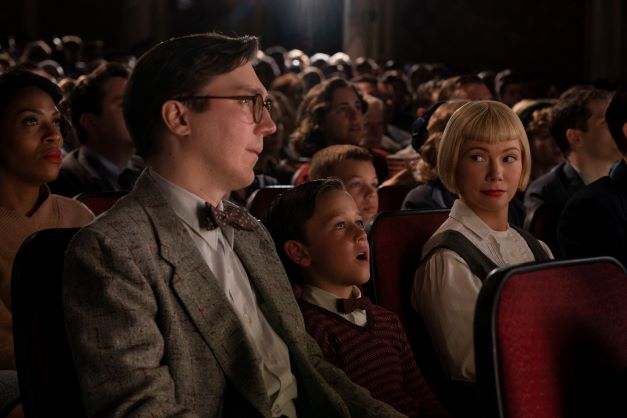 It’s a wrap for another year of TIFF. Finally, an in-person event from start to finish, TIFF saw celebrities like Edward Norton, Kate Hudson, Viola Davis, Michelle Williams, Jennifer Lawrence, Natalie Portman, Seth Rogan, Taylor Swift, Eddie Redmayne, and Daniel Craig among the faces making their way through the red carpet. Harry Styles, who made an appearance wearing a green jacket accompanied with a Gucci bag, also prompted many, many screams from adoring fans.

Steven Spielberg’s The Fablemans won the People’s Choice Award at the festival, marking the first time the acclaimed director entered a film he directed into the running. The semi-autobiographical film, co-written by Tony Kushner, is set to be released on Nov. 11. David Lynch makes a cameo.

“This is the most personal film I’ve ever made, and the warm reception from everyone in Toronto made my first visit to TIFF so intimate and personal for me and my entire Fableman family,” said Spielberg after the win. “Above all, I’m glad I brought this film to Toronto.”

A big get at TIFF was Anna Kendrick’s The Dating Game, which is the star’s directorial debut. The thriller was picked up by distributors after Kendrick did an in-person pitch to AGC Studio’s CEO Stuart Ford. VVS Films nabbed the rights in Canada, and Signature Entertainment did so for the U.K. and Ireland. Other distributors who scored the rights include Telepool (Germany), Sun Distribution (Latin America, Spain, and Portugal), Lucky Red (Italy), and Roadshow Films (Australia and New Zealand). Kendrick will also star in the film, which is a true story, as Cheryl Bradshaw, who appeared on the 1970s TV matchmaking show The Dating Game. Bradshaw selected bachelor Rodney Alcala, who wound out to be an actual serial killer. AGC Studios will produce and finance the film.

Kendrick also made news after word got out that she had been trapped in an elevator with seven others while doing a press event for her film, Alice, Darling, which is one of our top picks from the festival. The ever-witty actress wasted no time when being rescued and took to Instagram to share her experience.

“Ah, the classic ‘I’m behind schedule at this film festival because I had to be rescued from an elevator’ excuse #TIFF22,” read the Instagram caption.

Canadian documentary Black Ice won TIFF’s People’s Choice Documentary Award. Directed by Hubert Davis, Black Ice looks at Black Canadian hockey players and examines the Coloured Hockey League, which ran from 1895 to 1930 in Nova Scotia. Players share their stories on the quest to get to the NHL, and the racism faced trying to get there. The film also focuses on Herb Carnegie, a gifted Toronto-born Black hockey player who did not have a real shot at playing in the NHL. Carnegie was only recently inducted into the Hockey Hall of Fame.

“We’re in an interesting place where we can say, ‘OK, are we going to actually address this stuff and talk about it and deal with it?'” said Davis. “Or are we just going to stay within our bubble? A lot of people are facing that choice at the moment.”

The documentary was executive produced by Drake, Lebron James, and Maverick Carter.

Sarah Polley’s Women Talking received a lot of buzz, with composer Hildur Guðnadóttir winning Variety’s Artisan Award at this year’s Tribute Awards. Guðnadóttir has been composing for over 20 years, with her imprint most recently heard in the television series, “Chernobyl.” She also scored Todd Field’s “Tár,” another film which made the TIFF circuit. Guðnadóttir is the fourth woman to win an Academy Award for her original score for Joker.

Brendan Fraser received a standing ovation (just like what was seen at the Venice Film Festival) for his role in The Whale. Fraser choked back tears as the roars and claps went on for five minutes. The actor also received the TIFF Tribute Award for Performance at the 2022 festival.

Glass Onion: A Knives Out Mystery was another film on people’s radar. Directed by Rian Johnson and starring Daniel Craig, Edward Norton, Janelle Monáe, Kathryn Hahn, Dave Bautista, and Kate Hudson, the film follows detective Benoit Blanc (Craig) as he heads into another new mystery to solve. Set on a private island, the new mystery of who killed a tech billionaire (Norton) is the premise. The film will be streaming on Netflix come December 23rd, but it will also screen in theatres beforehand.

Weird: The Al Yankovic Story is a music biopic worth noting, especially because basically what you are watching is fictitious. If you’re looking for some laughter, check it out. The film sees Daniel Radcliffe (as Weird Al), Evan Rachel Wood, and Rainn Wilson. The flick lands on the Roku Channel on November 4th.

Main photo is courtesy of The Fablemans/TIFF.