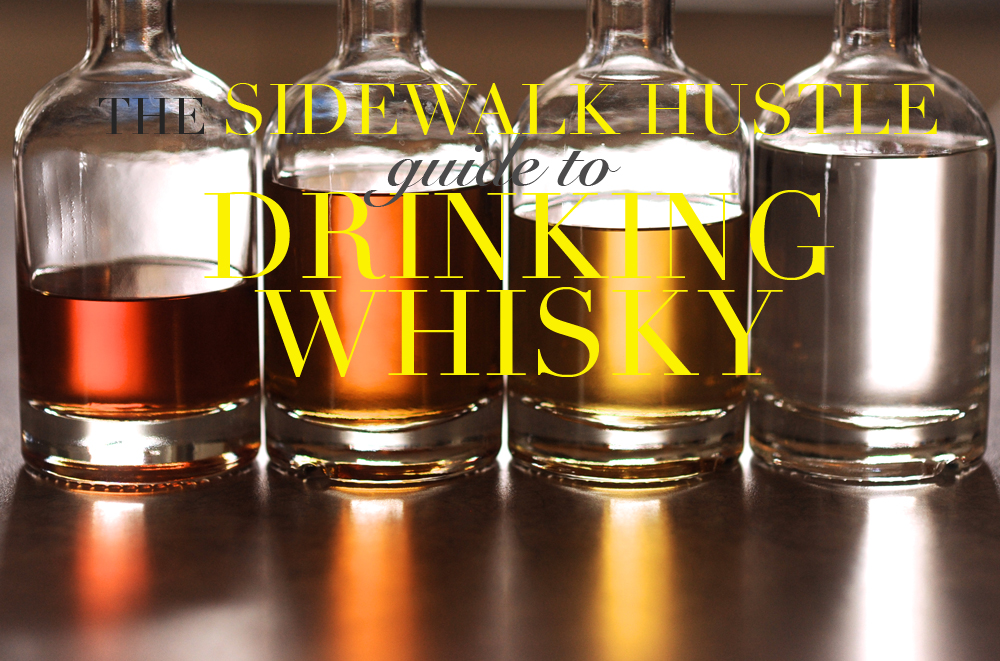 In the first of this two part series, Sidewalk Hustle explores the What of how to drink whisky.

How is a tough question when it comes to whisky, because the hows are always wrapped up in the ways of ones culture. Neat, mixed with your favourite sodas, with ice, water added, at cask-strength, in a wide-mouthed glass, a tulip-shaped glass, or from a plastic cup at a buddies house. There are so many ways, (and none of them wrong!) but in the interest of getting a good base line, we are going to propose at least one way to get the most out of the flavours ever-present inside your whisky, and will limit to whiskies appropriate for savouring and forego ice because it limits what you can taste.

It’s 2014 now and like everything in this world of commercialisation, we’ve lost something in whisky that was once there. Mass markets require mass-production and are always looking for ways to cut corners and increase profits, which means the stuff folks think of as great whisky (which can be found commonly at the LCBO in Canada), is likely watered down too far, chill-filtered, removing the natural oils that produce rich flavours, and coloured with caramel to ensure each years run looks the same as the last. Good scotsmen (sorry, here entereth my cultural bias) would be wreithing and turning in their graves, and a good many are!

So before you start pouring Jameson’s or Cutty Sark into a fancy tulip glass, trying to break down every iota of flavour in there–looking like the arrogant assholes that think things are best when purchased from inside a glass case, or poured at 40 bucks an ounce–we’d better be drinking stuff actually worth tasting!

So the first step of how to drink whisky is to do some looking for a whisky that has some good quality to it, from the beginning. A good starting point, if you’ve got a bit of cash, is a whisky from distilleries like Laphroaig, Bruichladdich, or Springbank (mostly of the peated, smoky variety). All of which are usually bottled at higher than 43% alcohol levels, uncoloured, and unchill-filtered so the natural oils are in there. Generally anything bottled above 43% abv. is potentially good, and anything above 50% abv. is likely to be a single run, not intended to be mass-produced. If you’re strapped for cash bourbon or Canadian Rye is a great choice and much more affordable way into whisky. Traditionally bourbon has been aged for shorter lengths of time, and is consequently cheaper (if you’re in North America, you’re not paying import duties). A great Canadian pure-rye that has been aged for 10 years and so consequently has had time to really soak in some complexity from the wood, is Masterson’s 10 year old Rye.

Despite bourbon and rye being great whiskies, I am a great fan of Scottish whisky, which has a distinctly different flavour from bourbon or rye (though retaining their subtleties and flavours), and so consequently will be the reference point from here out.

In the land of scotch whisky, there is a ton to know, and one of the most confusing first pieces of knowledge is all this business about single-malts? The term single-malt is placed on a product to distinguish between it and blends–whiskies that are a combination of single-maltings in varying proportions. A single-malt is basically whisky that was distilled from a single batch of malt and put into casks for aging. Blends are whiskies that have are the beautiful product of combining various runs of whisky at varying ages and flavours. They are cheaper to produce and tend to be on the younger end, and thus are more commonly mass-produced. But that’s not the rule; one of my favourite blends is the Cadenhead’s Islay blend, with a wonderful kiss of smoke and demararra sugar.

The second piece of knowledge most think of as truth, is older is better. This statement, besides being a reflection of personal bias, is the kind of thing a person says who was told that by someone else who didn’t really know, or was part of some bourgeois culture of arrogance. Age, while a factor is by far the least important variable in what makes up good whisky. There are fantastic whiskies found at each end of the spectrum, just as many can be said to need to be let to sleep a longer in the wood, as can be found that were ruined by being left too long.

Whisky is art, and art requires thought and consideration of each factor that goes into its production for it to capture our attention anew. We fail so often to believe this, and consequently teach rote answers rather than the journey of discovery and question. Whisky is the same. It can’t be watered down to one factor that makes it “good” and age merely needs to fit the conditions of the specific whisky.

Stay tuned for the second part of this series next week where we detail how to drink whisky, including, tasting, smelling, and savouring.