Art Basel Miami Beach is always a scene. From celebrity sightings to FOMO-inducing parties, every year, the escapade gets grander and grander. This year was by no means any different, except maybe to say it was even more extra. To celebrate the 20th anniversary this year, Art Basel Miami Beach attracted a record number of exhibitors—282 from 38 countries—and an innumerable amount of collectors, buyers, curators, VIPs and the general public in tow, who swarmed the booths for appreciation and social media fodder. Industry heavy hitters such as Jeffrey Deitch, White Cube, Perrotin and more showed their very best wave-making art. Then, of course, there were the smaller fairs, the parties, the openings, the talks… It was a movie; it was sunglasses and Advil; it was Art Basel Miami.

We’ve compiled a round-up of the best of the best of what took place this year. So read on, maybe feel the FOMO, and know you can always come hang with us next year!

Aside from being the namesake of whole weeks worth of art, parties, and celebrity spotting, there is nothing quite like Art Basel. Taking over the massive South Beach Convention Centre, there is a small city’s worth of modern and contemporary art on display. So many semi-priceless pieces are on display that walking through the fair is the cultural equivalent of a few weeks abroad. Everything from paintings to sculptures to digital, even an ATM in collaboration with MSCHF and Perrotin that allowed visitors to insert their debit card to get cash out and then ranked their bank balance on a scoreboard. Suprise, Diplo ranked one of the highest balances! Capitalism is wild. The rest of the fair runs the gamut of style, form, and medium and is an overwhelming display of human creativity. If you could only do one thing at Art Basel Miami, this is it. 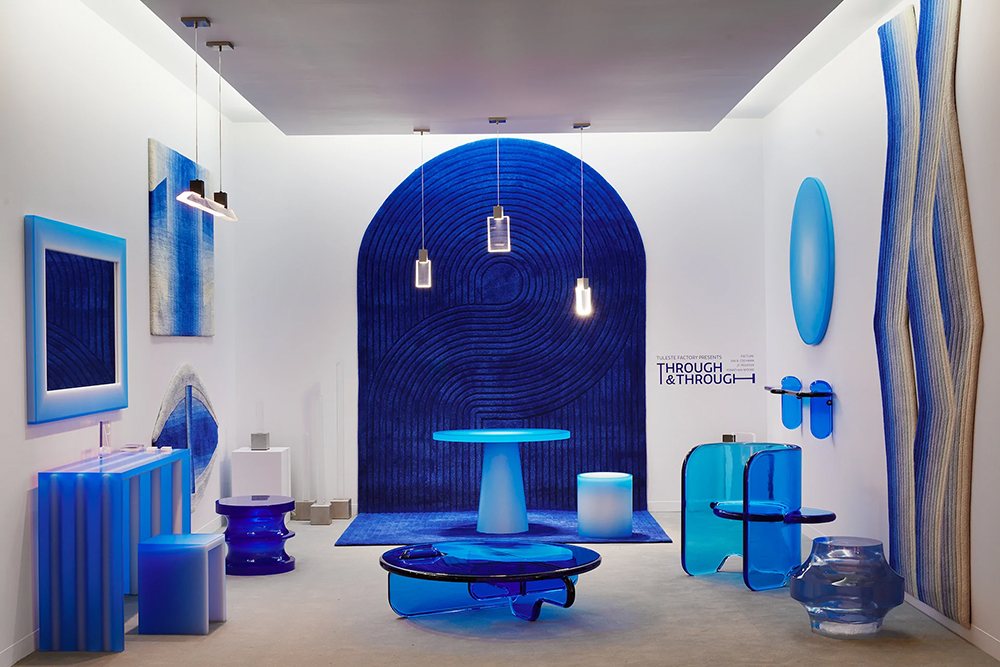 Conveniently located across the street from the main fair stands the much smaller, equally impactful Design Miami. Exhibitors from all over the world displayed mini living rooms which highlight furniture, lighting, timepieces, sculptures, jewelry, and even a car. Standout installations for us were Tuleste Factory of New York (pictured above), whose booth was a monochromatic collection from an assortment of up-and-coming designers; Fendi’s Triclinium installation in collaboration with Austrian artist Lukas Gschwandtner featuring functional sculptures and scenography inspired and referenced by ancient Roman chaises, traditionally used for reclining while eating and socializing; Eleni Petaloti and Leonidas Trampoukis of Objects of Common Interest with a stunning space curated by Mr. Lawrence; Garance Vallée’s ‘Planted Air’ installation presented by Perrier-Jouët; and perhaps a personal favourite, Galerie SCENE OUVERTE’s presentation of Léa Mestres beautiful objects, including super cool massive pastel lamps.

In addition to the exhibition, Design Miami held a series of talks featuring big-name artists, including Daniel Arsham, A$AP Rocky, Gaetano Pesce (whose collaboration with Bottega Veneta was displayed at Design), and convening for the late Virgil Abloh which included a series of discussions celebrating his life and legacy.

Head to Design Miami for a virtual 3D tour at this link to check out the exhibitions. 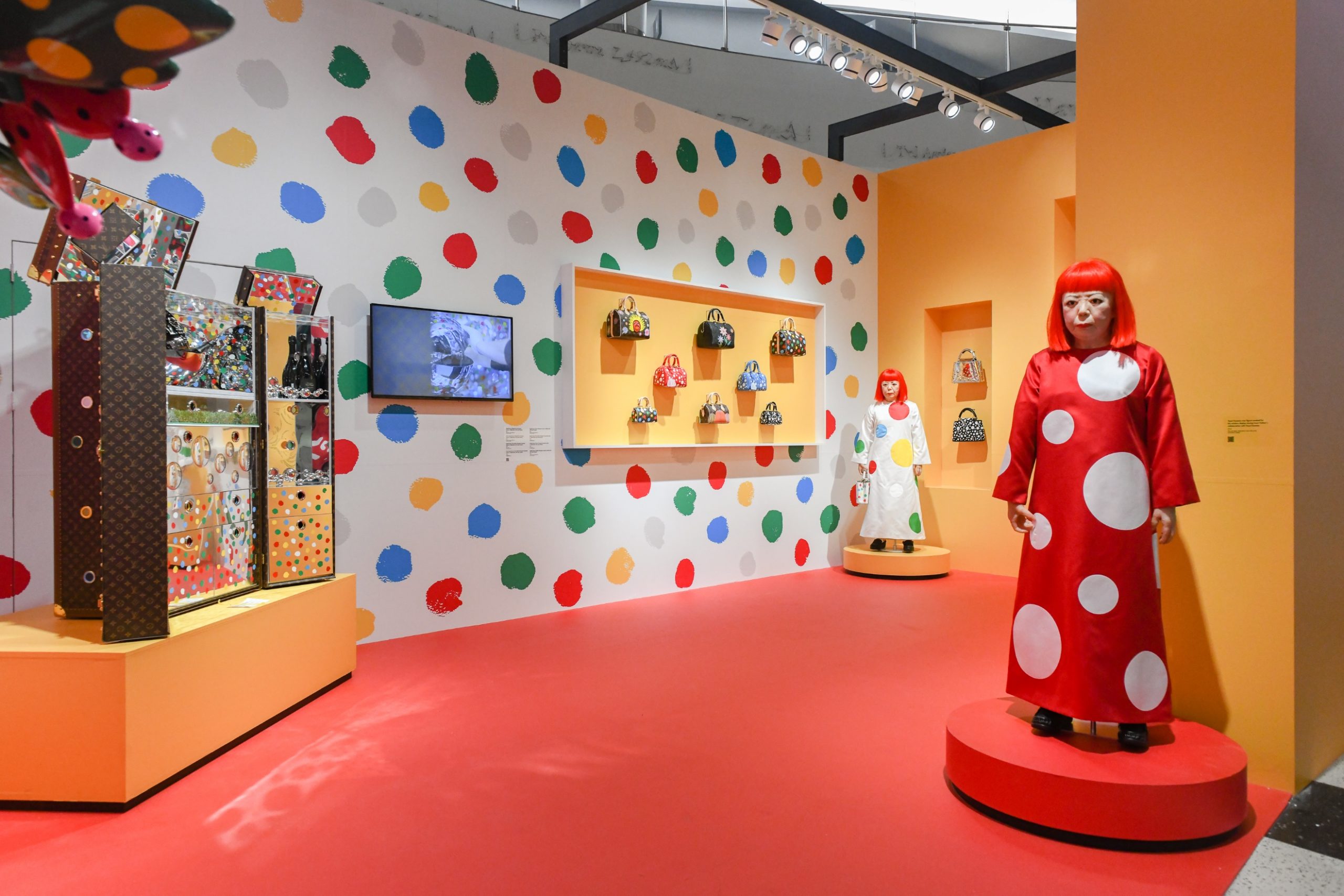 Before heading into Art Basel proper at the convention centre, stands Louis Vuitton’s exhibition of selected works curated by the mast archivist and her team. Featuring phenomenal collaborative pieces from some of the world’s most renowned artists, including a panda sculpture by Takashi Murakami on a vintage Louis Vuitton trunk, two wax figures of Yayoi Kusama, created by the artist herself, paintings by Richard Prince and Alex Katz, a photo by Jean Larivière, and the Artycapucines collection. The real winner was the sneak peek of the upcoming Yayoi Kusama collection, which included pieces from the original collaboration 10 years ago. 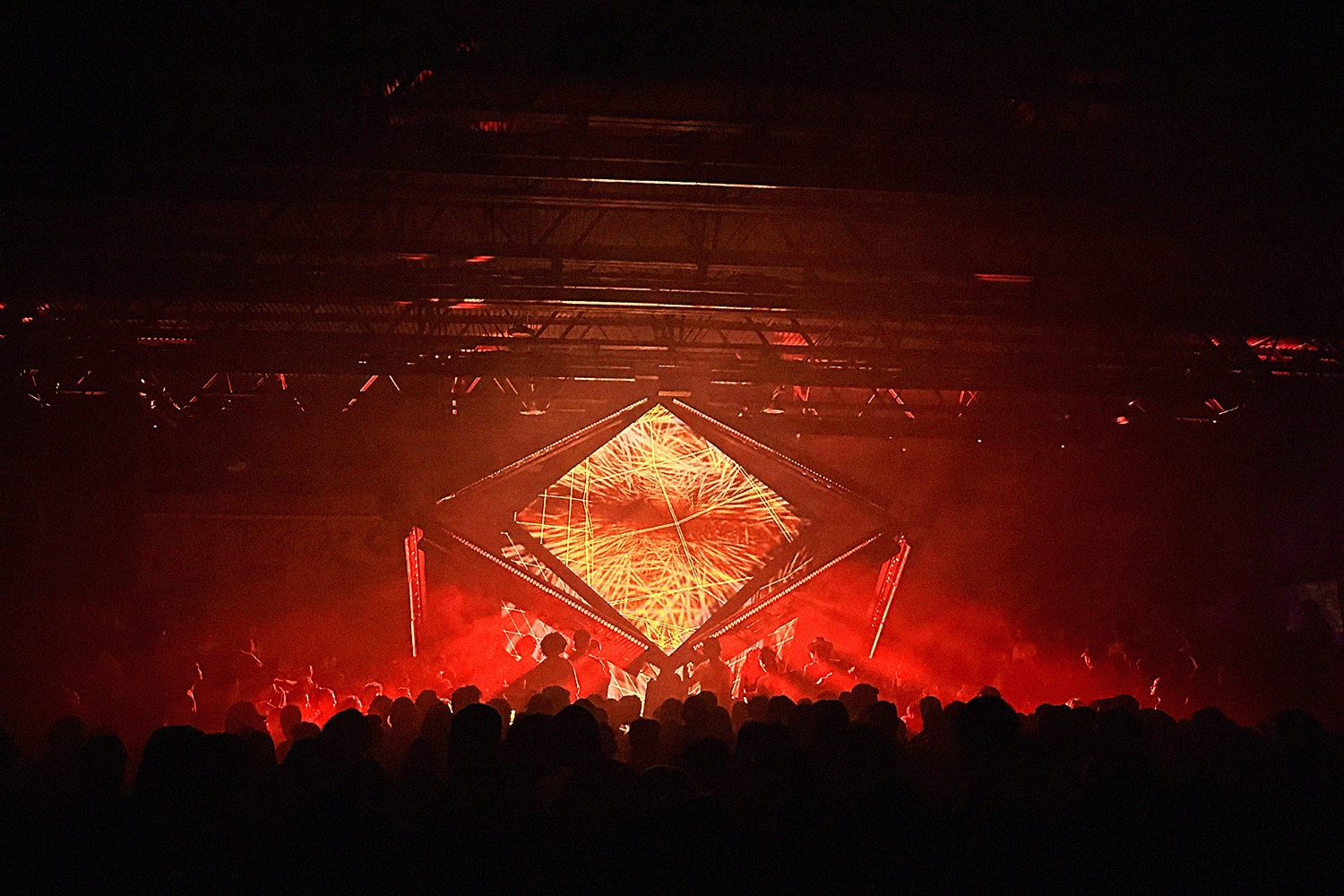 Starting the week off right with an epic anniversary party that saw hundreds descend into the Wynwood area, was Stone Island and their fortieth-anniversary party. Inside an old RC Cola Plant, the night was a banger with music from O.Bee, Tomas Station, and Jamie XX, all spinning inside a geometric, screened-in DJ booth projecting cool visuals. While it was a bit of a cluster to get in by the time we arrived, (welcome to Art Basel, am I right?) with European dudes screaming, “I’m Lars!” and shoving their phones into the most patient door staffs faces. Reminder, patience is a virtue. The vibe of the party was joyous in a throwback kind of way. With the DJs hidden behind the cube-shaped screen, it was about the party and not the celebrity of the DJ. A bit like a 90s rave and the vibes went on into the early morning.

A Picanté by the pool, a margarita on the beach, Soho Beach House is always a good time. However, when it comes to Art Basel, the house becomes the place to be, to party every night and lounge of during the day. Inside their infamous beach tent, the house hosted talks, pop-ups and epic after-parties by some of the biggest names, including Porsche, RIMOWA, White Cube, Armand de Brignac, and many more. Highlights from the week included the annual White Cube gallery dinner and afterparty with Kelis, a live set from Rick Ross, which was poppin, an IYKYK (if you know, you know) party featuring a James Blake DJ set which was so lit it got shut down by the police (!!) and the second annual day time Jump Judy jam featuring Leon Bridges and Dash. There’s just something special about singing along to “Hustlin’” while dancing on the beach with the waves crashing behind you; these are the moments that live forever.

In celebration of the 30th anniversary of pop megastar Madonna’s forever scandalous book “Sex,” Saint Laurent created an elaborate exhibition turned nightclub on the beach. During the day, the exhibit “Sex by Madonna” featured photos from the pop star’s 1992 book photographed by Steven Meisel. Planned and curated by Madonna herself and designer Anthony Vaccarello, the exhibition was housed inside an edgy metal structure. For the anniversary, 800 copies of the re-edition were made available for the price of $2,200 USD with the proceeds donated to the Raising Malawi charity, which supports Malawi’s orphans and vulnerable children with critical resources, including education, medical care, food, shelter, and psychosocial support. 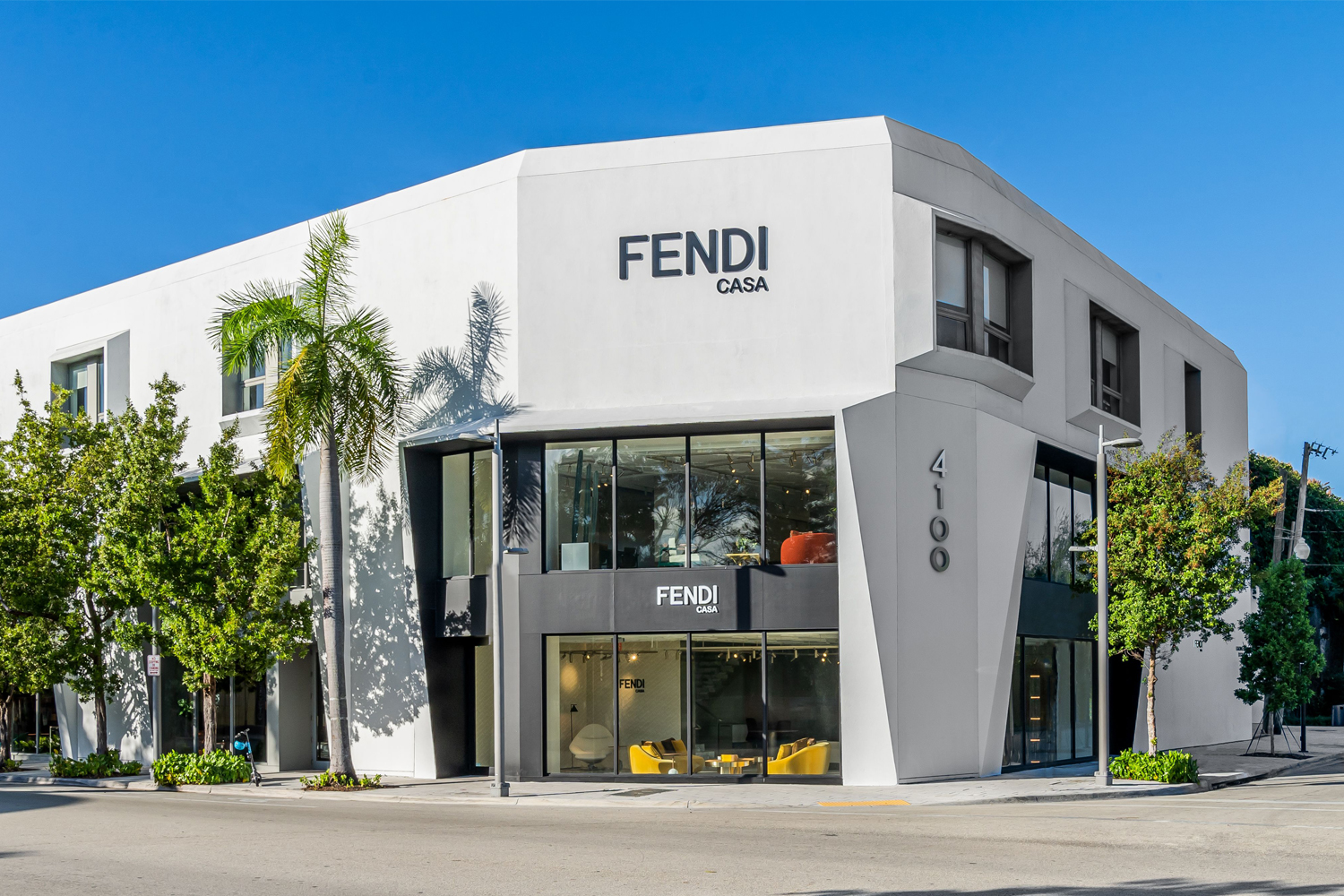 Store openings in Miami are a dime a dozen. The new Design District Balencigia opening was embarrassingly empty, but clearly for other reasons. So what do you do to set yourself apart in a good way? Make sure the space positively drips with luxury: leather, fur, marble, purrr…. keep the Paloma’s, Champagne, and Caviar Blinis flowing and book everyone’s favourite up-and-coming Toronto DJ Gonnie Garko. The space and collection is drop dead gorgeous, especially the striking green marble dining table on the upper level. 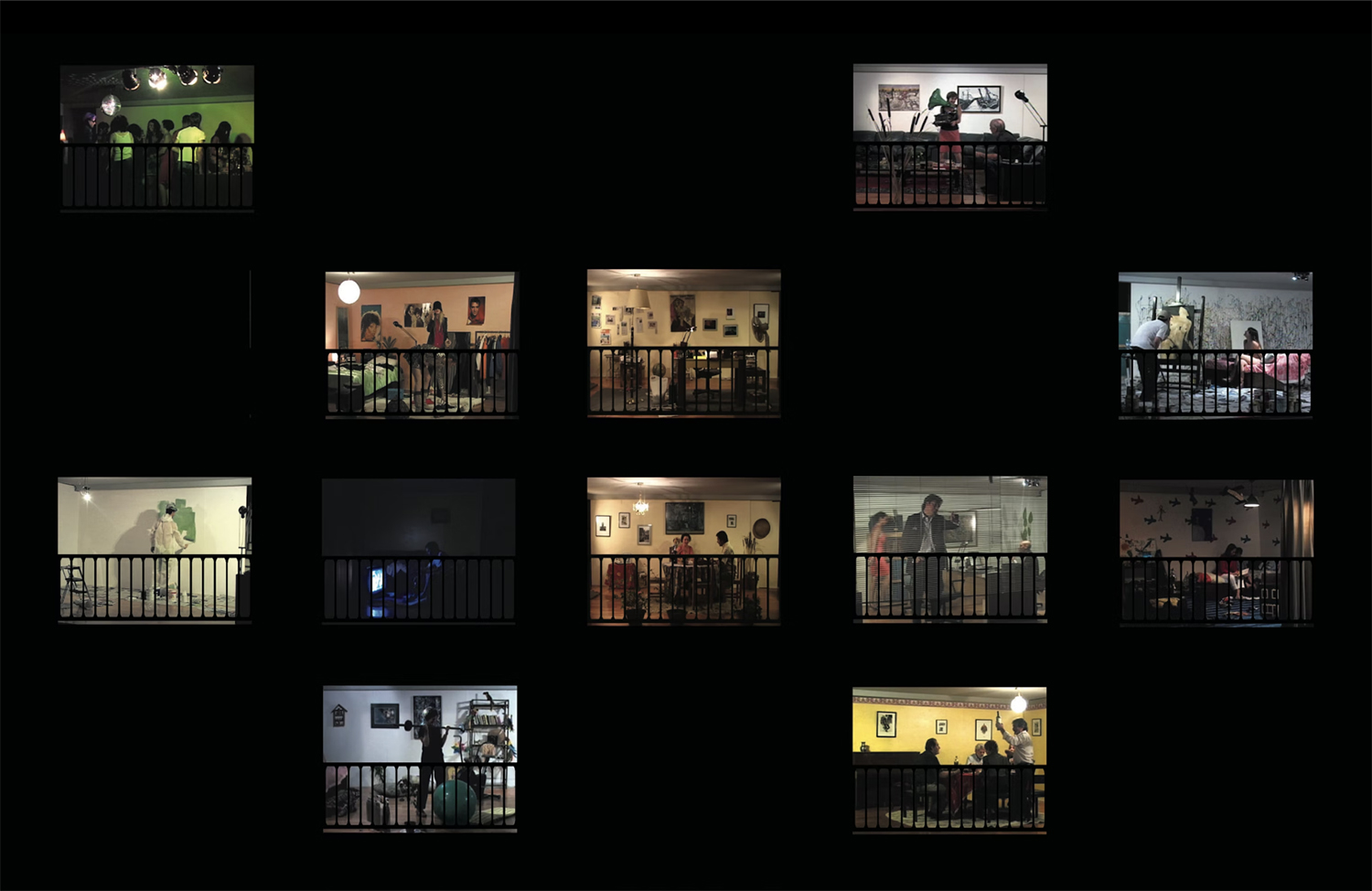 The Art Basel / Art Week celebration party at the Pérez Art Museum Miami (PAMM) was wild! DJs, live band, drinks and interactive social media-friendly art. Celebrating the first monographic exhibition of Leandro Erlich’s work in North America, Liminal featured selected and arranged works curated by New York’s Dan Cameron that span more than two decades of production. Woven throughout PAMM’s special exhibition galleries, Liminal is designed to lead visitors through a number of encounters that have you questioning spacial awareness and sensory inputs in a fun and thought-provoking way. This is another must-see exhibition on view through September 4th, 2023. 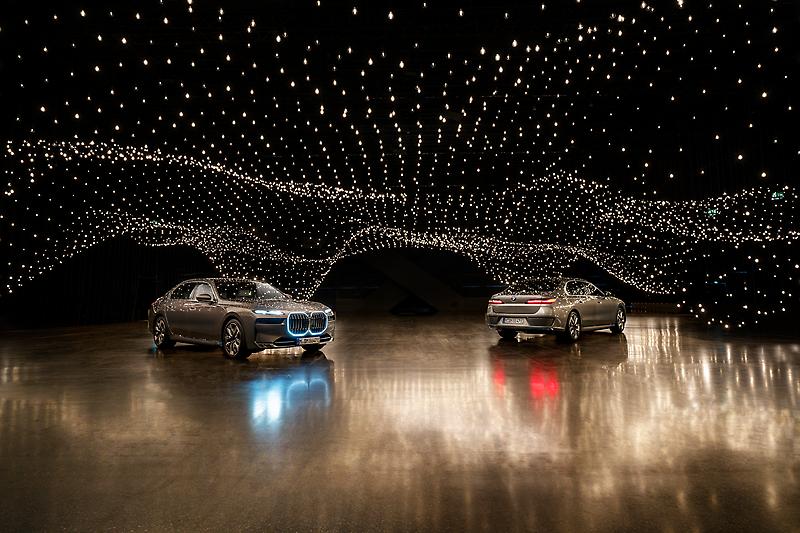 Superblue is always a good time. But couple that with the big bucks of BMW i, and you get a emersive exhibition called Pulse Topology. This is the first presentation in Miami of Rafael Lozano-Hemmer‘s ongoing series of ‘Pulse Artworks’, which capture participants’ heartbeats and then optically interpret them into a light show. Activated by six pulse sensors with breakthrough photoplethysmography (PPG) technology that uses computer vision algorithms to optically detect each visitor’s heartbeat and sends that info to three-thousand lightbulbs suspended at different heights, creating a glimmering landscape of crests and valleys. Inspired by conversations with engineers and designers of the new BMW i7, Lozano-Hemmer uses the same technology to activates Pulse Topology to illuminate the BMW i7’s interior. 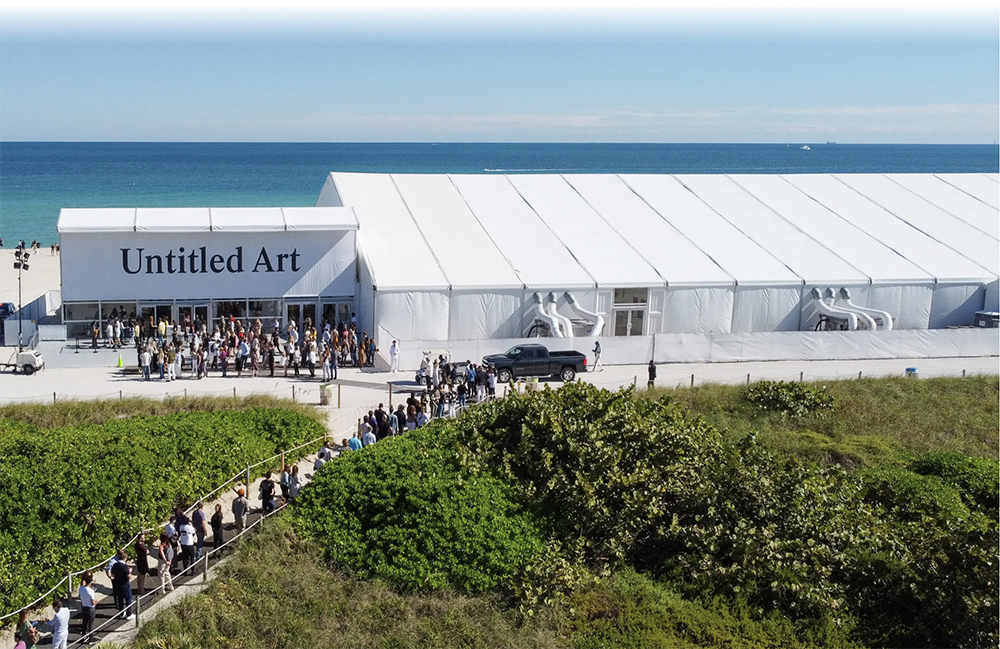 Before Art Basel officially starts, Untitled Art Miami Beach opens its doors to the adoring crowds of art enthusiasts and collectors. Taking place annually on the sands of South Beach, Unititled is guided by a mission to support the wider independent art ecosystem. This year marked the 11th edition of the fair and was a great way to ease into the art overdose the rest of the week had in store for us. While cruising the tent we casually bumped into Pharrell Williams admiring and surveying the fair. Untitled is always a must. 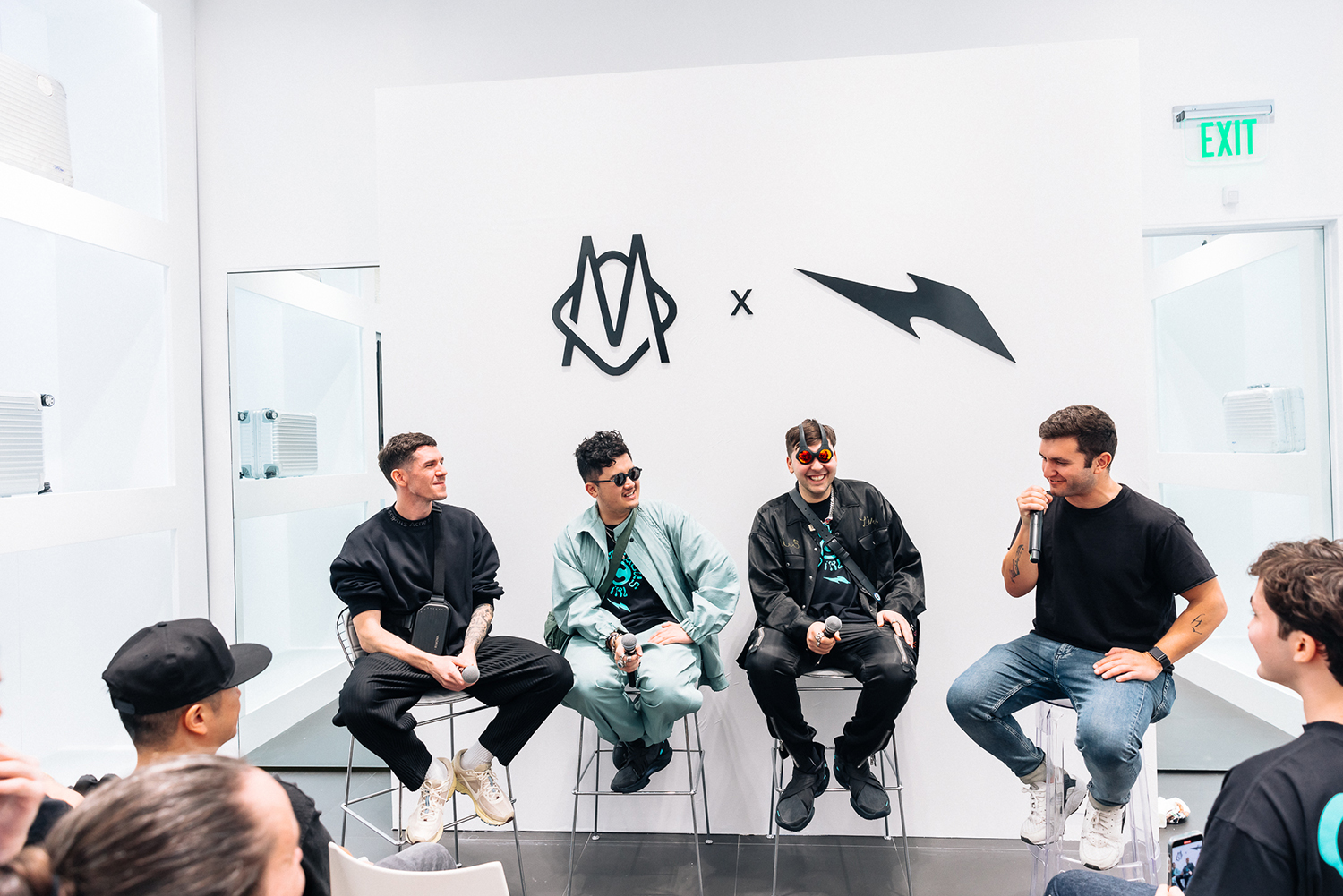 In celebration of their recent foray into the metaverse, luxury luggage brand RIMOWA held a panel in honour of their collaboration with RTFKT. The two brands got together for an in-store event at RIMOWA’s Design District Store which featured music by Gonnie Garko, cocktails by our faves Rosaluna Mezcal and Ruinart Champagne, and a first-ever panel between Chris Le and Steven Valisev, co-founders of RTFKT, and Mathieu Plenier, Global Head of Collaborations at RIMOWA. After the in-store event, the party moved to Soho Beach House with performances from Berrakka, Helado Negro and Ape Drums. 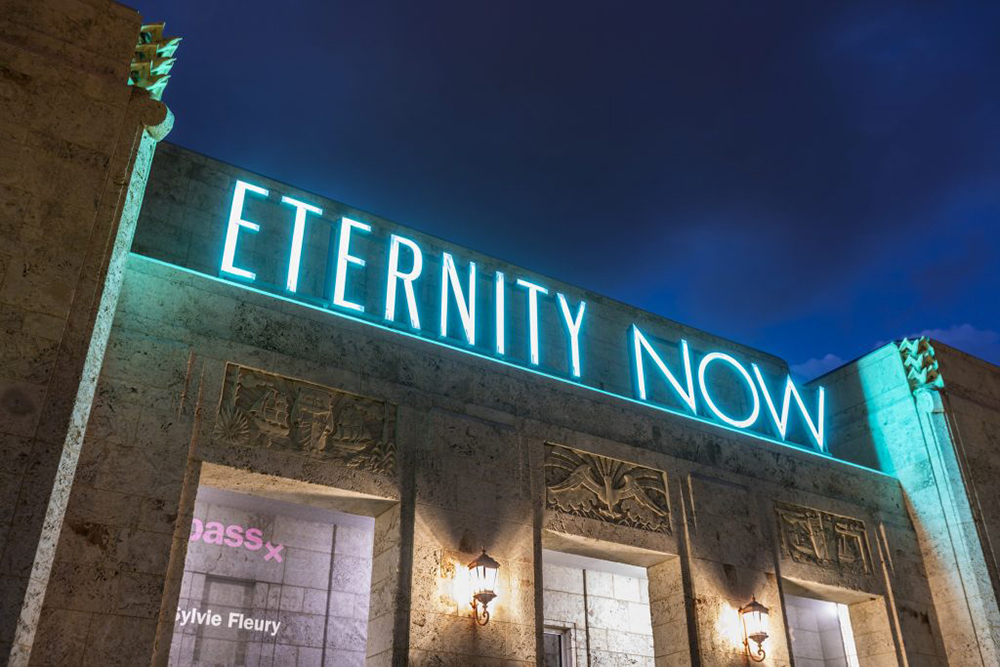