The Best of Super Bowl LIV

This year’s Super Bowl LIV face-off was between the Kansas City Chiefs and the San Francisco 49’ers, with the 49’ers losing to the Chiefs in a final score of 30-21. This is the Chiefs’ first Super Bowl win in 50 years.

The halftime show (which was co-produced by Jay-Z) was Latin-hugged thanks to performances from J-Lo and Shakira. J-Lo appeared with J. Balvin to sing her track “On the Floor,” while Shakira sang “She Wolf” alongside her classic 2000’s hits like “Hips Don’t Lie,” “Whenever, Wherever,” and “Waka Waka.” J-Lo also brought us back to better R&B-pop days singing “Love Don’t Cost a Thing” and “Get Right.”

We also got to witness this sweet time between Jennifer Lopez and her daughter. 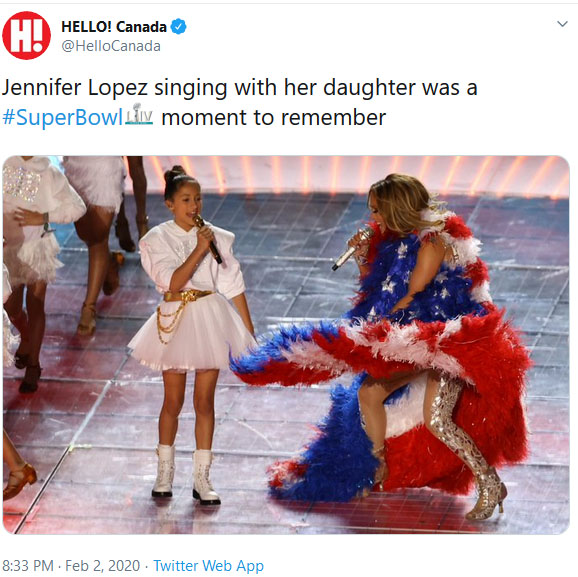 Shakira’s tongue became a big winner of the evening and inspired a meme, naturally. During her opening set she let out what in Arabic is referred to as a zaghroota, a celebration chant, and people got confused, happy and appreciated it, for the most part.

Demi Lovato fulfilled a lifelong dream (which she tweeted about in 2010) of singing the national anthem at the big event.

All this, and an onslaught of ads, some of which felt dull and nonsensical, made for an expensive evening of entertainment. Advertising for a 30-second ad slot during the game rang in over $5 million, with the total sales figures expected to top $400 million, according to NBC Sports. To compare, NBC references the Super Bowl in 1967 which saw an average price between $37, 500 to $42, 500 per ad slot.

Ahead of the big event, some companies like Planters decided to put their beloved mascot to bed, pushing a #RIPPeanut Super Bowl campaign in the wake of basketball star Kobe Bryant’s tragic death.

The most tearful ad this year came from Google. The commercial for “Loretta” was apparently based on a Google employee’s grandfather—the voice heard in the ad is said to be the grandfather’s voice. The ad sees a man typing “how to not forget” into the Google search bar while “trying to remember” the experiences had with wife Loretta, and you hear him asking Google to show him photos of the two. Soon we start to see a carousel of photos from their life and travels together. At the end of the commercial, Google spews back out all the things that the man told Google to remember, like Loretta used to hum show tunes; Loretta’s favorite flowers were tulips, and Loretta had the most beautiful handwriting. The ad concludes with the man saying, “Remember, I’m the luckiest man in the world.”

ICYMI (Remember, you will cry):

There were ads for Soda Stream, Reese, Avocados from Mexico (featuring Molly Ringwald?), a galactic ad from Olay featured astronaut Nicole Stott and stars Lily Singh, Taraji P. Henson and Busy Phillips all on a quest to#MakeSpaceForWomen, advocating for more support and opportunities for women interested in STEM careers.

Jimmy Fallon and John Cena ran around together for Michelob Ultra. Post Malone sipped and sprayed some Bud Light Seltzer, and of course, Alexa made an appearance that lasted longer than anyone had time for, but Ellen DeGeneres and Portia de Rossi made it bearable.

Bryan Cranston hacked down a door with an axe, a door that had Tracee Ellis Ross screaming behind it, which followed by her needing a good gulp of Mountain Dew? It was supposed to be a spoof of The Shining.

Jason Mamoa wasted away while also balding, all for Rocket Mortgage Quick Loans, which tapped the Aquaman star to show off like he’s never been shown off before, but inside his home. This was Rocket Mortgage’s third Super Bowl ad over the years. The company is also the official mortgage sponsor of the NFL, as reported by Adweek.

Little Caesars tried to drive home its offering as better than sliced bread. Dashlane also tried to hammer home the importance of privacy.

Snickers put out a clever little video around internet culture for their #SnickersFixtheWorld campaign.

Pringles and Doritoes each had their own spots, with Pringles enlisting the help of Adult Swim’s Rick and Morty to enhance flavour combinations, and Doritos brought out its own battle between Sam Elliott and Lil Nas X set to “Old Town Road.” Doritos won the chip battleground yet again.

Cheetos was there too, complete with MC Hammer’s “Can’t touch this” forever jingle, and some loaded cheese fingers.

Microsoft’s ad featured the first woman to coach in the Super Bowl, Katie Sowers, and Planters, which said goodbye to its mascot Mr. Peanut, introduced #Babynut for some reason.

U.S. President Donald Trump was also part of the Super Bowl ad roster, highlighting Alice Johnson (who was granted clemency in 2018) and criminal justice reform in one of two 30-second spots he had during the broadcast.

And of course, Bill Murray made an appearance, fittingly on Groundhog Day.

The Super Bowl also saw a selection of trailers to upcoming flicks.

No Time To Die