The Best Moments from the PyeongChang Olympic Games

For the past 16 days many of us have been glued to our screens and feeds, following the biggest competition in winter sports: the Olympic Games. There were some great moments had. Canada came third in overall medal standings with 29 medals, falling behind Germany and Norway. This is the most medals ever won by our home and native land, and even though there were letdowns (losing to Germany in hockey being up on that list), there was a real celebratory vibe for athletes and fans alike.

Here are our favourite performances, people and stories.

Athletes are often quite resilient when it comes to injuries, but three Canadian Olympians took the focus at the Pyeongchang Games: figure skating’s Kaetlyn Osmond, speed skater Denny Morrison and snowboarder Mark McMorris.

Back in 2014, Osmond broke her fibula and after contemplating on whether or not to continue competing, she basically started over, regained her strength and capabilities, and now four years later is an Olympic bronze medallist.

McMorris went from looking really bad (see photo below) just under a year ago, suffering life-threatening injuries including a collapsed lung and rupture spleen, to winning gold at the Games, proving undeniable dedication and willpower. He also inspired the Prime Minister of India, who uses the 21-year-old’s comeback story in his motivating speeches shared to students. 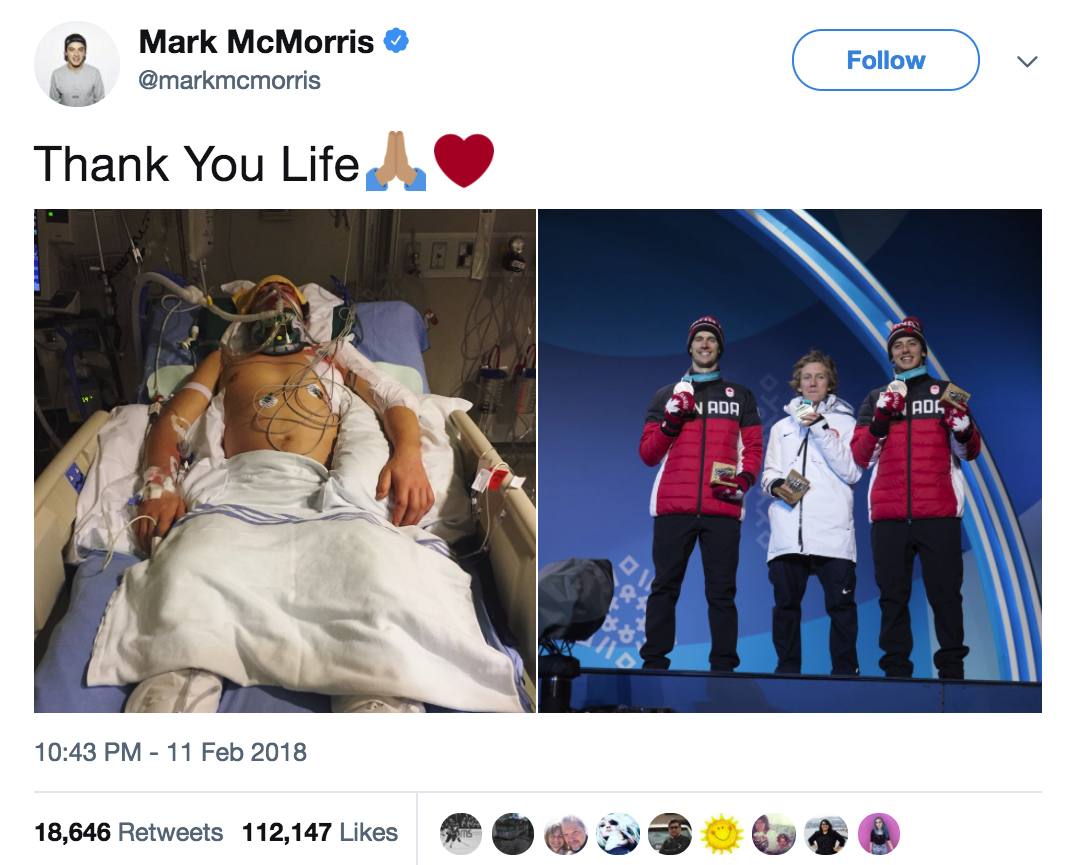 We are extremely proud of @markmcmorris! His tenacity and courage inspire people across the world. Here’s what I had said about his accomplishment during my recent Townhall with students. pic.twitter.com/JaJMvVVJ0H

The Regina, Saskatchewan-native brought in 3.4 million viewers in Canada for the Slopestyle finals, which was the most viewed sport of early coverage.

Speed skater Denny Morrison may have missed the podium, but the fact he competed is miraculous. In 2015 he broke his femur, bruised his kidneys, had a concussion and punctured his lung after a crazy motorcycle crash. A year later he had a heart attack (he was 30).

Curling continues to be one of the most beloved sports to watch and Canada’s captivating team of Kaitlyn Lawes and John Morris (who claimed gold) locked in this fascination nicely. Canucks have known the excitement and skill that comes with curling, but this year the viewership increased a lot, specifically within the U.S, South Korea and Japan.

Let’s talk about Tessa Virtue and Scott Moir. Why? Because it’s impossible not to. From their unbelievable chemistry to their patriotic partying, the pair that’s been skating together since they were little tots collectively made Canada (and the world) fall in love every time they stepped onto the ice.  They broke their own record, won gold and bronze medals and basically were trending on Twitter for the majority of the Olympics. Oh and they’re the only skaters to receive five Olympic medals, making the them the most decorated in the sport, and theirs is yet another comeback story to note too. Is it any surprise they were Canada’s opening ceremony flag bearers?  There’s no doubt Virtue and Moir were two of the most recognized and followed athletes of the Games.

Is this just not the greatest?

Oh, and this too.

They even played tribute to the late Gord Downie by skating to The Hip’s “Long Time Running,” as we all watched in beautiful silence.

AGE AIN’T NOTHING BUT A NUMBER

Tomorrow I will push out of the starting gate in what will most likely be my last Olympic Downhill race. I’m trying to enjoy the moment as much as I can and I am thankful to share this race with such amazing teammates. I know everyone expects a lot from me, and I expect even more of myself….however there’s only one thing I can guarantee; I will give everything I have tomorrow. Count on it.

Lindsey Vonn, 33, made history as the oldest Olympic female winner, taking home a bronze medal in Alpine skiing. This will be Vonn’s final Olympics allegedly (although she’s still saying she will be competing for a couple more seasons), and it marks a triumphant sendoff after she missed Sochi due to torn ligaments in her knee. Her story legacy has been well documented this year, and it’s said her next move could be into acting with help from of The Rock. If she puts in the same kind of effort and heart that she does in training who knows what type of results she could get. She’s not someone to bow down on anything it seems. We’ll be watching.

Virtue and Moir aren’t the only athletes that beat records. Japanese figure skater Yuzuru Hanya won the gold medal, a Winter Olympic win that has not happened for the country since 1952.

Javier Fernandez showed up nicely on ice, making the showmanship of skating even more enthralling.

How can you turn away from this?

There was Czech snowboarder, Ester Ledecka, who became the first athlete to compete and the first female athlete to win gold in both skiing (Super G) and snowboarding competitions. Ledecka’s only been doing the ski circuit since 2016 and she’s the first snowboarder to have been able to cross over and capitalize big time. She’s only 22 years old.

Canada and Germany tied for a gold medal in the two-man bobsled, marking a first in 20 years that two countries tied for the top podium spot. Their time was 3:16.86.

And let’s not forget about our own big finisher, Sébastien Toutant, who grabbed the first gold medal ever in the men’s big air snowboarding competition event.

Canada had some sharp looks with their all-vegan uniforms from HBC, but nothing truly compared to the outrageous outfits sported by the skiers from Mexico.

Then there was the much-loved K-pop group, EXO, who took the stage to perform in matching Gucci suits.

Or what about Tonga’s flag bearer all oiled up during the opening ceremony, rocking this getup?

The closing ceremony saw a bevy of Korean talent, including a ridiculously awesome performance from 13-year-old Yang Tae-hwan, prompting Twitter peeps to sound off with awe and praise.

The incredible work from Jambinai should not be overlooked too.

If you’re not familiar, Take. This. In.

Here are all of Canada’s Olympic medalists: