The Art of Leadership for Women 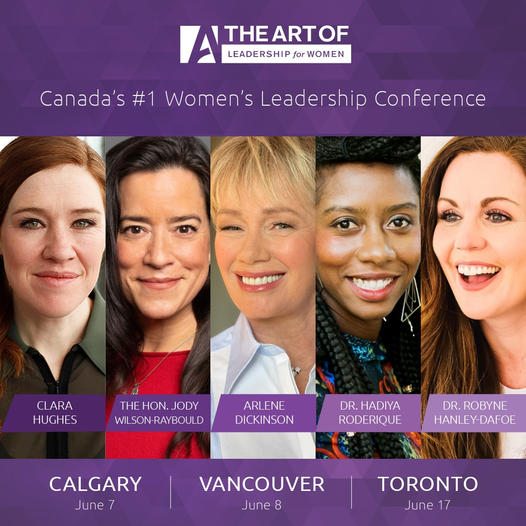 The Art of Leadership for Women conference makes it way to Calgary (June 7), Vancouver (June 8), and Toronto (June 17).

According to organizers, past attendees have said that 98% of them “learned an actionable insight to become a better leader,” while 94% would recommend the conference to a colleague, and 92% of them plan on attending again in the future. 91% of past speakers were rated as impactful by attendees.

Check out the 2022 speakers below.

Arlene Dickinson, the star of CBC’s Dragons’ Den, GP of District Ventures Capital, and three-time bestselling author, will be speaking about change, transformation, and reinvention.

The Honourable Jody Wilson-Raybould, who is the former Minister of Justice and Attorney General of Canada, and First Nations advocate, will be speaking about leadership, governance, and reconciliation.

Dr. Hadiya Roderique is a researcher, journalist, advocate, and one of Canadian Lawyers’ 25 most influential lawyers. She will speak about equity, diversity, and inclusion.