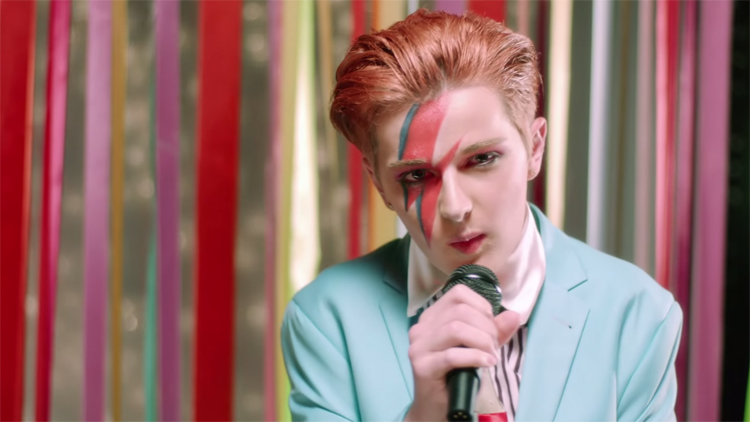 Canadian indie-pop duo Tegan and Sara released their eighth album Love You To Death earlier this summer and now they’ve dropped a moving video for their single “Faint of Heart.” Directed by Devon Kirkpatrick, the video features a bunch of LBGTQ bad-asses as pop icons. Tyler Ford is Prince. Ella Giselle is Madonna. Dominic Ravina is Elvis. Olabisi Kovabel is Grace Jones. Cooper Treibel is David Bowie. And we can’t forget about Eli Erlick and Ni Ching-Marino as Sara and Tegan. They happened to film the video the day after the tragic shooting at Pulse nightclub in Orlando, as Tegan Quin explained to Teen Vogue…

“There was something very personal about this tragedy and that was undoubtably on our minds as we arrived on set… From the second we walked in, I felt incredibly emotional. The cast was so young, so excited, so talented, so friendly and so diverse. It was clear this video was going to be very special. I felt honored to be included… which sounds silly since it was a music video for our band. But from the second we arrived, my brain recognized the music video as something we were doing together with our community to present the bravery, the talent, the love, the art, and the connection we all have, rather than just a vehicle for our music — which was a relief. It might be hyperbolic to say this, but I think it altered how we looked at how we were going to proceed in our career. The video had meaning, and that felt very important in that moment of time.”

Watch the video for “Faint of Heart” above.

Love You To Death is out now on Warner Bros. Grab a digital copy via iTunes here or a physical copy here.