Tesla’s anticipated Cybertruck is expected November 21, according to a tweet posted by Elon Musk. On November 6 via Twitter, Musk messaged the launch date and that the release of the company’s first electric pickup truck will take place in Los Angeles at the Space X rocket factory. If you heard the hype, you’re aware the Cybertruck is supposedly a “better truck than an F-150 in terms of truck-like functionality, and [it will] be a better sports car than a standard [Porsche] 911,” according to Musk. Cybertruck’s starting price is said to be less than US$50,000, plus it seats six, offers approximately 400 to 500 miles of range and can apparently tow up to 300,000 pounds. [The Next Web]

Volvo launched its first completely electric car, the XC40 Recharge, last month with a promise of a new model out each year until 2025, according to Bloomberg. And now the Swedish carmaker has signed a deal with its battery suppliers to trace cobalt using blockchain technology, too. It is hoped that through the use of this technology, Volvo will be able to trace the origin of cobalt used in its batteries to combat supplies produced under unethical conditions.

“We have always been committed to an ethical supply chain for our raw materials,” said Martina Buchhauser, head of procurement at Volvo. “With blockchain technology we can take the next step towards ensuring full traceability of our supply chain and minimizing any related risks, in close collaboration with our suppliers.”[Bloomberg]

Move over Netflix, there’s a new streaming service contender in Disney+, which is available in Canada, the U.S. and the Netherlands on November 12. The cost is CAD$8.99 a month or CAD$89.99 a year. Disney+ will also be available in Australia and New Zealand come November 19. Content from Pixar, Star Wars, Marvel and National Geographic will be available through the Disney+ platform. It’s been reported that users will initially get nearly 500 movies and 7,500 TV episodes.[Disney]

Instagram will test out a new feature that hides likes on uploaded content posted by its users in the United States. This could take effect this week, according to Instagram CEO Adam Mosseri. And this move follows months of trial in Canada where hiding like counts also happened. Users will still get to see their like counts on posts, but such notifications won’t be shown to followers or appear publicly in the Instagram feeds. [Variety]

At this year’s Adobe Max conference, one of the best ‘Sneaks,’ as they’re called by the company, was the ‘About Face’ feature. The ‘About Face’ feature can detect the probability of whether an image has been manipulated; the tool looks at the individual pixels of an image, honing in on depth variations as well as stretches in texture. Apparently, the tool can also attempt to undo the changes to the image in question. Adobe explains more about it in this 7-minute clip. We need more reliable features that detect fake bots, likes, deepfakes and misinformed commentary online—now. [The Next Web]

A new Westworld trailer introduces the world to Incite Inc., a tech company that wants you to know that the “future is powered by you.”

This year’s Web Summit (“Glastonbury for nerds”) saw over 160 countries represented and featured over 70,000 attendees with 46.3% of those in attendance being women. The speaker roster included Jaden Smith, Tony Blair and American whistleblower Edward Snowden. Much chatter surrounded Snowden, in particular, since his new book Permanent Record has been part of the popular discussion since its release in September. There’s also been global questions circulating around the protection of sources, data collection, surveillance and the impact that whistleblowers have on a democratic society, which was part of the agenda of talks at Web Summit.

The Drum reports that conversation around political ads on Twitter and the increasing linkage seen with politics and technology was apparent—“Tech has become more political” is one of the subheadings within the outlet’s recap.

As quoted by The Drum: “Policies aren’t suddenly formulated by a singular person at a table somewhere in the world: growing levels of discourse in lots of important forums slowly move countries or unions in a particular direction,” Web Summit co-founder Paddy Cosgrove said during the event. “Web Summit hasn’t become more political—tech has become more political.” [The Drum]

ICYMI: Fitbit is being acquired by Google. The transaction is said to close in 2020 (subject to customary closing conditions), according to a press release from the pioneer in wearable technology. Google will pay US$7.35 per share for Fitbit, marking the company’s value at approximately US$2.1 billion. The deal will also put Google in a stronger position to compete with the likes of Apple. [Fitbit PR]

World Cyber Games (WCG) recently published the below infographic detailing metrics from WCG 2019. The event saw a global viewership of 193 million, making it the “largest number among all the other comprehensive esports tournaments,”the WCG reported. The global esports festival aims to “go beyond being just an esports competition to becoming a festival of global harmony,” and this was the first WCG in six years.

Matches featuring over 40,000 players from 111 countries, offered across eight platforms and 13 languages, with 120,000 spectators, was all represented this year.  The New Horizons sector included Robot Fighting Championship, AI Masters and Scratch Creative Challenge for players to dive into. [WCG]

Deloitte released the annual list of winners for its Fast 50 program, highlighting technology companies in Canada that are having a measurable upward momentum. The majority of the list’s winners are from Ontario, with British Columbia and Quebec following behind. Below is the full ranking. Companies are required to be in business for at least four years with revenues of at least $5 million in 2018 in order to qualify. [Deloitte] 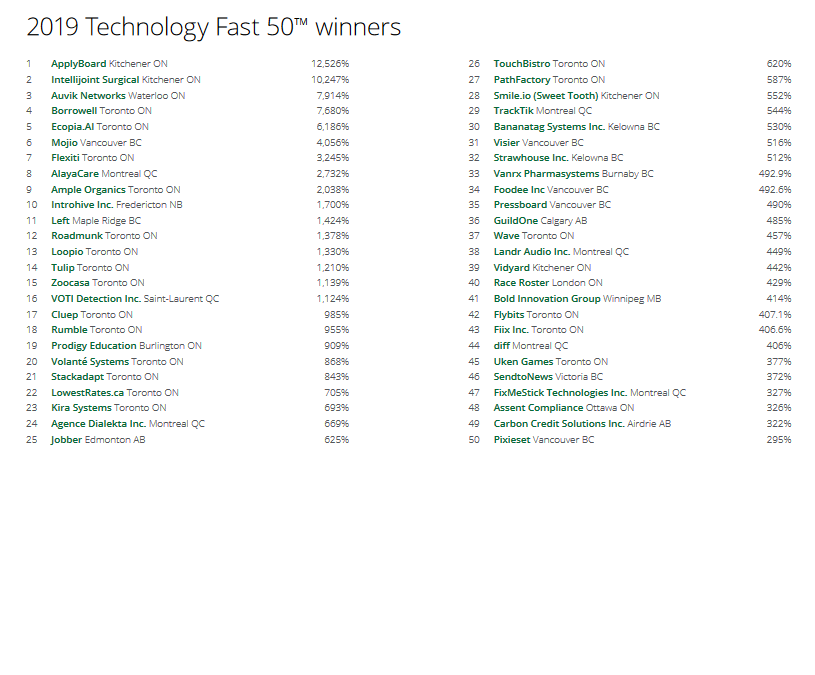 Black Friday is coming on November 29, but if you can’t wait until then there’s also Singles Day (“the world’s busiest online shopping day”) on November 11. CNET has a good roundup of deals to check out. Alibaba reported this year’s Singles Day event has brought in a record of approximately US$31 billion in sales.

This is also happening this week.