September is usually the month Apple drops a new iPhone onto the scene, but in 2020, nothing is normal, and so it announced something else that’s going to be interesting.

On top of new Apple Watches and iPads, there are two new subscription services. Let’s take a closer look at the basics of what you can expect.

Working out with Fitness+

Fitness+ is built around the Apple Watch to deliver what Apple is calling a “first-of-its-kind personalized workout experience.” The idea is to offer virtual studio-style workouts that you can then see on your iPhone, iPad or Apple TV.

Trainers put you through the paces for the workouts available, which you can do with a simple pair of dumbbells — or no equipment at all. But if you do have equipment, that’s no problem, either. There is an entry point and graduated path for beginners, too, so you don’t necessarily have to be active to get started. The included exercises to start are yoga, HIIT, cycling, treadmill running, treadmill walking, rowing, strength, core, mindful cooldown and dance.

Apple says it will add new ones each week, though users get to choose from a custom regimen after Fitness+ learns which workouts you finished, and what might be best to do next. If you’re looking to work on something more specific, there’s a filtering method based on exercise type, duration, trainer and even the music you want playing. 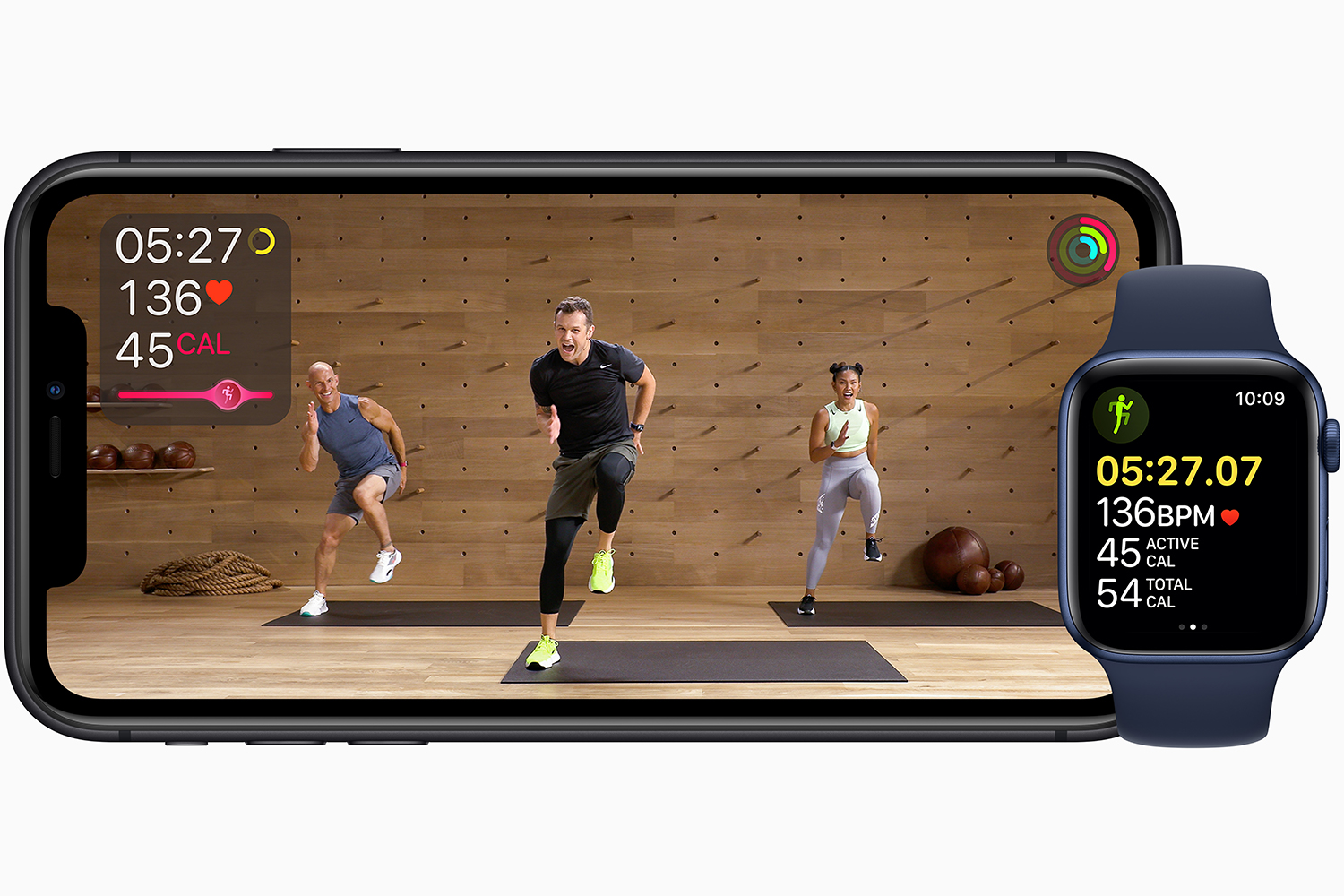 While working out, metrics from the Apple Watch show up on the device screen. Apple cited an example of heart rate appearing when the trainer mentions it during the workout. An optional “Burn Bar” puts your results up against anyone who’s already done the same workout.

The Activity Rings that are so prevalent with the Apple Watch are prominent here as well, as Fitness+ tries to incentivize you to close them up. There’s some integration with Apple Music, letting you save tracks you hear during workouts so you can listen to them whenever you like.

You’ll find Fitness+ in Apple’s Fitness app on the iPhone, iPad and Apple TV, but you will need to have an Apple Watch Series 3 or later to make all this work. It costs $12.99/month or $99.99/year. Apple Watch users also get a free one-month trial when it officially launches before the end of the year. 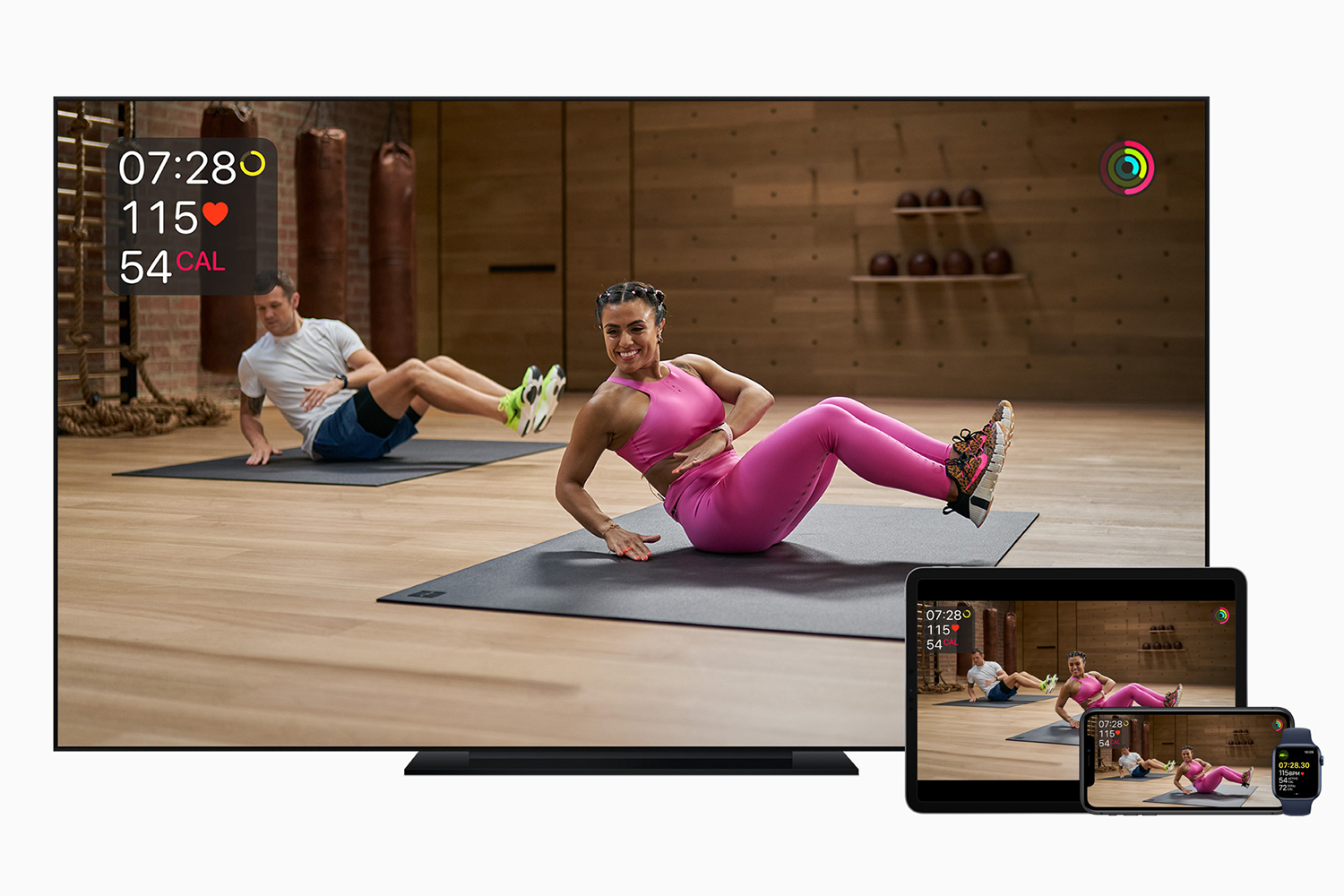 What if you could pay one price and get all the services Apple has? That’s what Apple One is for. In an unexpected move, the company is bundling its various subscription services together for a more accessible way to see what they’re all about,

It’s a pretty basic premise. Pay a flat fee for the bundle, which includes Apple Music, Apple TV+, Apple Arcade, Apple News+, Fitness+, and iCloud. You can access all of them on the iPhone, iPad, iPod touch, Apple TV and Mac. These aren’t pared-down versions of the respective platforms, either. You get full access for all of them, save for Fitness+ and iCloud, where there are tiers involved. There are three overall tiers to go with:

Individual is $15.95/month and comes with 50GB of iCloud storage, but doesn’t include Fitness+. It’s a savings of over $7/month if you were subscribe to them all individually, according to Apple.

Family is $20.95/month for up to six family members and includes 200GB of iCloud storage. Here, too, you don’t Fitness+ thrown in. This would save over $10/month, otherwise.

Premier is $33.95/month for everything, including Fitness+, along with 2TB of iCloud storage. This one saves over $32/month.

There is a 30-day free trial for any of the services you don’t already use. If you do become a paying subscriber, you get one bill for it all, and you can cancel your plan anytime. Family and Premier plans are shared, but they’re not all tied to one Apple ID other than the one actually paying it. Each of the services will also work on any devices supporting them. So, for example, you would be able to play Apple Music on an Android phone, or watch Apple TV+ on a Roku.

Look for this to go live sometime in the fall, probably soon after the next iPhone launches in October.