Music festivals can be a bit of slog, especially if your tech products are out of date. We’ve all seen that guy with his phone up in the air, searching for a signal with his ancient phone, and we’ve gotta say, we wouldn’t able to survive the festival hustle without amazing tech innovations (and many respective portable chargers) like our iPhone 6 Plus and more recently the AppleWatch.

We had the chance to put both our Apple Watches to the test last weekend at Osheaga Music Festival in Montreal and we found it was so helpful we couldn’t resist sharing our experience. Not only did we clock some series kilometres worth bragging about on the activity app, but we found it helped us in a couple unimaginable ways as well including grabbing an important phone call while on the back of a golf cart backstage (with a beer in hand).

It goes without saying that there’s a learning curve when you first start using the Apple Watch, but after a few days fooling around with it, we found it completely essential to elevate our festival experience, specifically in these five ways! 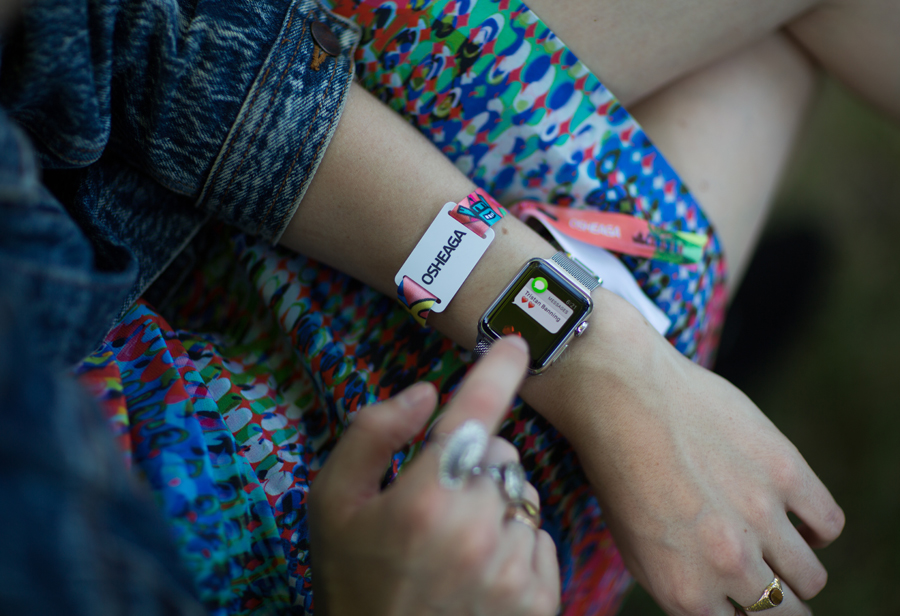 On the ride into Montreal we made sure to personalize the quick messages on our Apple Watch to festival-pertinent responses so we could respond to the team on site at any time, no matter how full our hands were. Need a beer!? Meet you at the Green Stage! Copy that. Be there soon. Meet you in VIP!…you get the idea!

This proved to be particularly helpful when in the photo pit shooting, in line for food or drinks and running from stage to stage when getting your phone out can hinder your speed. Super handy!

This one goes without saying, but man did we clock some serious kilometres last weekend! Aside from just general steps and stairs, we wanted to get extra credit so we used the workout app when we knew we would be doing any running or fast walking throughout the festival grounds as well. It was also really fun to gamify the whole experience by challenging each other to see who clocked higher activity from day to day on the festival grounds.

We also used Siri as a personal assistant through the weekend to google random things about the bands on the festival line up.

This one was huge! Since rain can really make or break your festival experience, we were constantly checking the weather app before, during, and after the festival everyday to see how the forecast changed from minute to minute. This would have been particularly helpful when major dump of rain came down during NAS’s set and everyone got soaked, but unfortunately no matter how many times you check, it doesn’t stop their information from being inaccurate. We would love to see up to the minute notifications from a weather app on Apple Watch over the coming months (get to it developers!).

Getting to and from a festival can be tough, but luckily Montreal’s transit system was pretty awesome all weekend. But because we’re used to TTC delays and disruptions in Toronto, we used the Transit app to check to make sure things were all clear heading to and from the festival each day. While driving we used the maps app to program in restaurant locations while parked and as we drove directions appeared on our watch with haptic notifications when we needed to turn, which was actually pretty neat.