It’s early stages, but Toronto is slated to get a new “block plan and mixed-use tower” to be located at the corner of Yonge and Delisle Avenue. This is the first ground-up development project in Canada from Studio Gang Architects, the Chicago-based company founded by award-winning architect and Harvard alum, Jeanne Gang.

What is ‘One Delisle’ all about?

Focusing on sustainability while increasing urban growth, One Delisle will offer both residential and retail uses. The property falls under Toronto’s Slate Asset Management‘s umbrella of management, which currently holds 10 properties in the midtown area of the city including the four corners at the intersection of Yonge Street and St. Clair Avenue.

Brad Connelly, Slate’s Vice President of Development, says we can expect to see a “new approach to tower design in Toronto” making mention of outdoor spaces that would usually be found in mid-rise architecture to high-rise design. “The building’s form was driven by two main considerations: a desire to respond to the local context and a desire to create comfortable and expansive outdoor space that can work in Toronto,” he says.

Each residence is said to come with a “generous terrace or balcony” as well.

Yonge Street and Delisle Avenue is a spot that’s pedestrian-friendly and garners a lot of foot traffic (ideal for retail shops)– this kind of structure will surely standout and plump up the area even more. The design of the 16-sided tower is said to help with reducing shadows on neighbouring streets as well.

“It’s not going to be a typical all-glass tower,” says Donnelly. “We want to push boundaries in terms of sustainability and building efficiency, which means we are thinking carefully about the building envelope and its materials.”

Take a look at some of the renderings of the tower below. 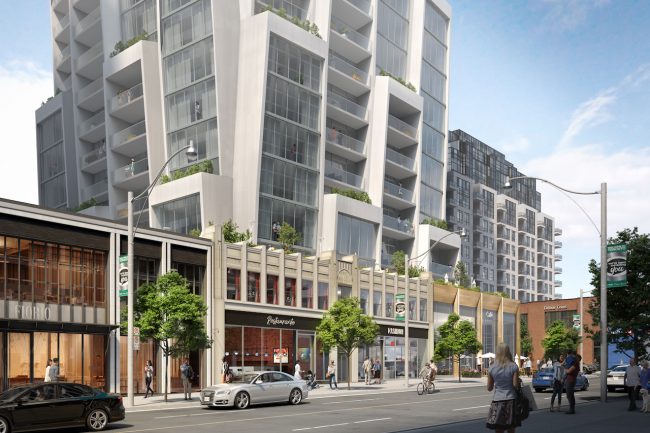 “There is a hill that crests at Yonge and St.Clair, which means the build site acts as both a pedestal and a view terminus from way uptown,” says Donnelly. “The challenge will be to develop a building worthy of being showcased, but we feel confident that we have the right team in place to do just that.” 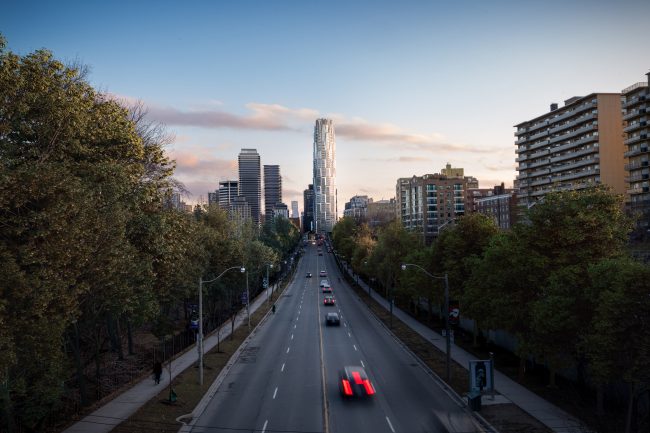 As you can see the structure is a compact, angled-panel tower with a geometric comb spiral. This style of construction will allow tenants’ units to vary, from their floor plates to climate control. The proposal also says there will be a 50 percent increase in park space.

“The geometry of the facade and the self-shading it provides allows each living space to stay cool in summer while also optimizing winter light,” explains Jeanne Gang. “This gentle pitch frames indoor-outdoor connections on the balconies and terraces that spiral up the building in an organization inspired by organic growth and form.”

Think of it as a sky-high, 48-storey tower that resembles a plant-like growth momentum. Tenants often have little outdoor space when it comes to condo living; One Delisle may have some relief with more green availability options. 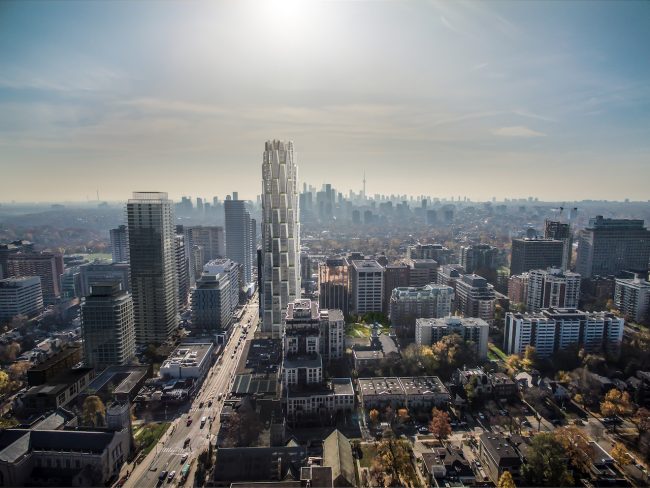 “Toronto is really a city in a park, and we looked at how people really enjoy these different ravine landscapes,” Gang said in an interview with Azure Magazine. “Here, people will have lots of balconies and trees in different ways. It’s not about forcing some kind of planting on here that’s the same. It’s really about letting people take control of their own space.”

On the ground, the sidewalks on both sides will be widened, and it’s confirmed that landscape architects Janet Rosenberg & Studio will be part of improving design to help open up space. Developers also proposed a pedestrian passageway and a public art installation.

Planning documents are up for One Delisle designed by @studiogang. Dynamic form of tower results in a diversity of floorplate shapes & sizes w a larger square based where is meets the street & ascending to a smaller curvilinear crown at the top. Very distinctive #architecture pic.twitter.com/C0xc96HctF 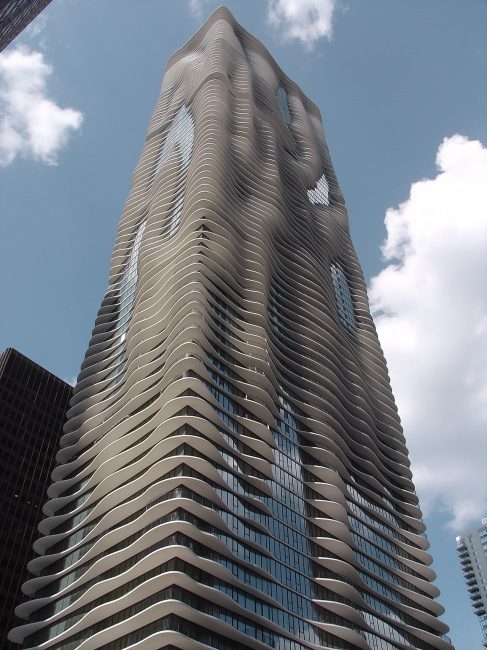 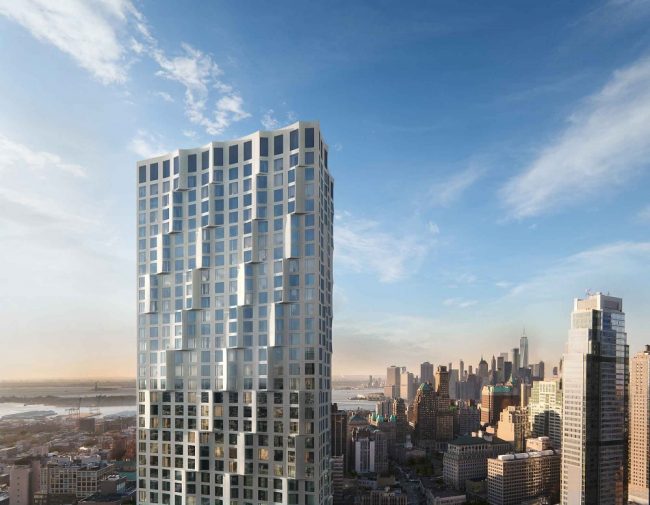 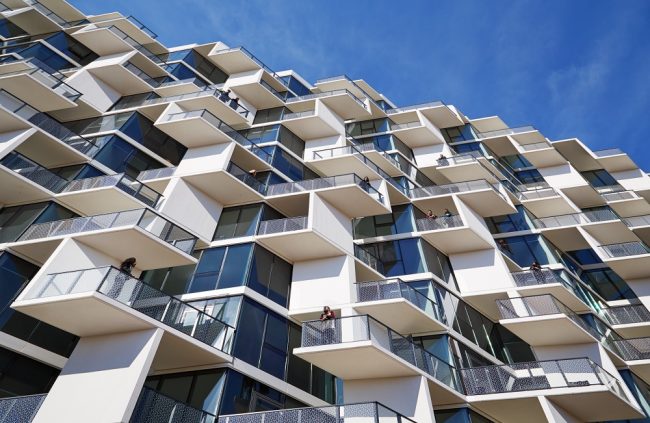 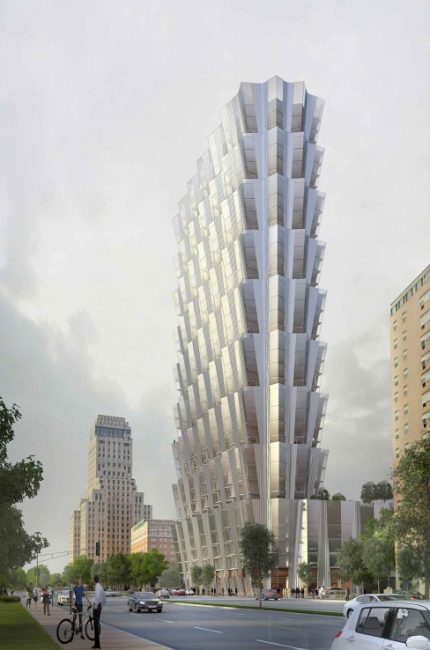 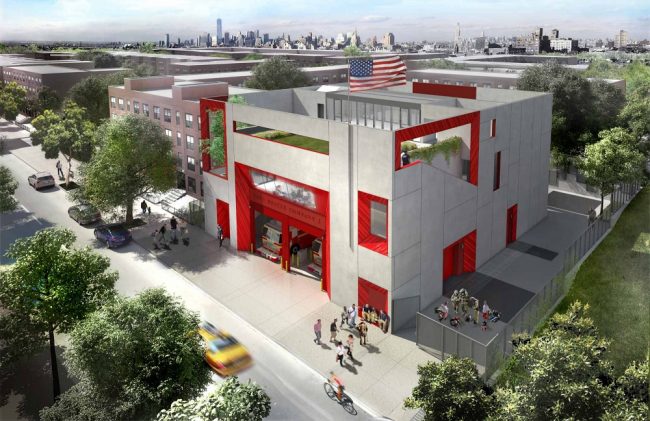 Studio Gang has more projects in the works in places like San Fransisco, Venice and Amsterdam, too.

All projects aim to bring about more connection between people, the city and nature.

One Delisle Toronto at 55 St. Clair Avenue West is expected to be completed by 2023.

More info can be found here.

If you’re in the neighbourhood make sure to check out the eight-story mural by Phelgm, which helped jumpstart the Yonge + St. Clair revitalization.