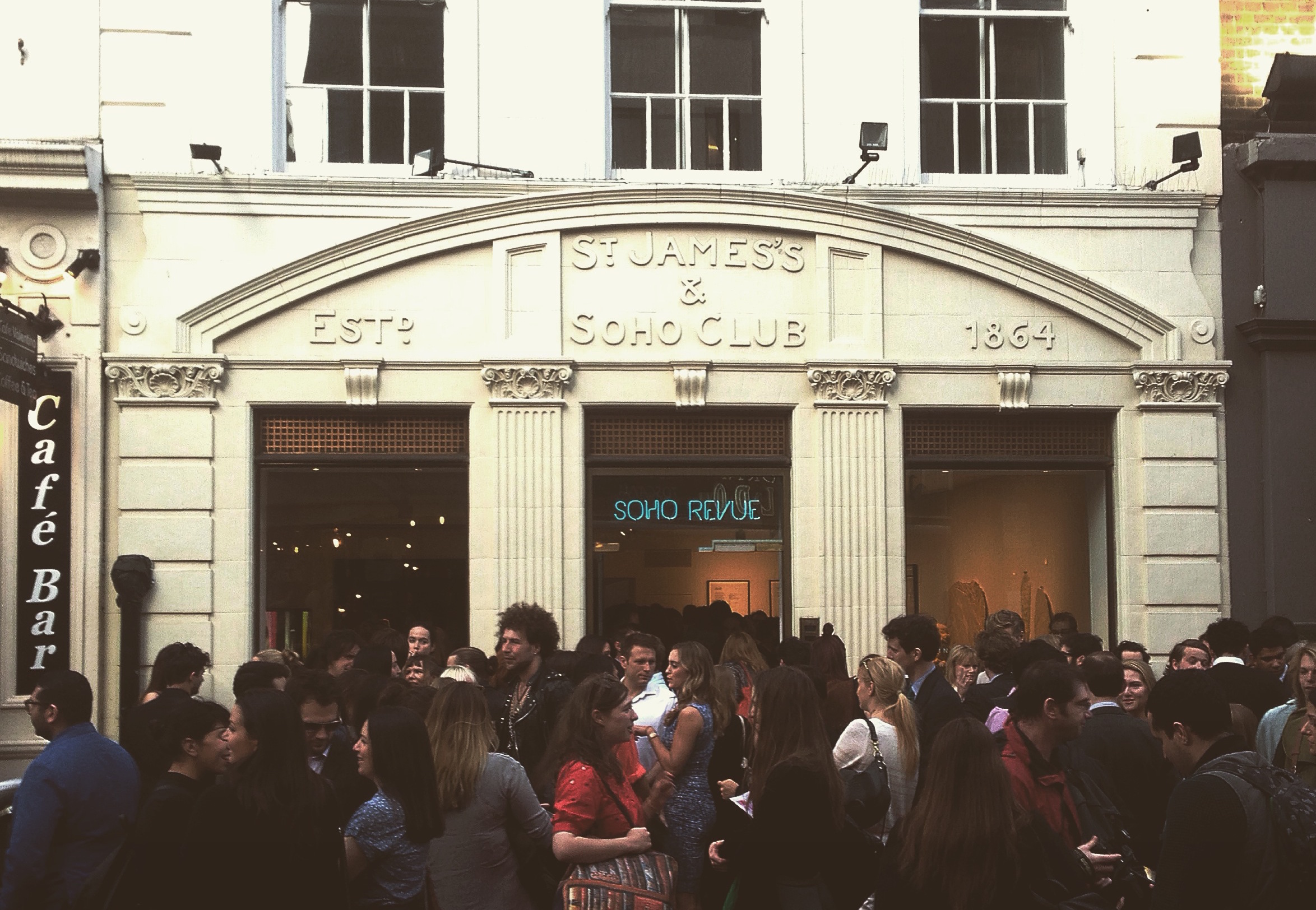 As a former-Torontonian now living and loving in London, I’ve been gazing upward with measured scepticism this spring. It’s been weeks without rain now and I’m ever so nervous about how long this luck will last. I was warned about grey days and constant downpours. I wasn’t warned, however, about how British folks flock outside at sight of even a lone sun ray. Layers come off, smiles widen and stone-faced Londoners will chat to anyone about anything (with some liquid courage, of course).

This is why walking up to 14 Greek Street, the site of the new Soho Revue, a new creative space in the heart of London’s rapidly evolving Soho felt just as familiar as walking up to your local post-work. Clusters of young pretty things were spilling onto the street, catching up, posing for paparazzi and all the while making sure not to make big deal out of it. London cool requires an air of blasé attitude, you see. This is exactly why I cooly ignored Jupiter Ascending and Great Expectations actor, Douglas Booth, as I walked by him locking up his bicycle down the street as he was swarmed by fans and photogs, nbd.

The Soho Revue is joining the Soho community in a time of transition marked by the familiar signals of gentrification: too-trendy cocktail bars, froyo and artisan cookies to name few. It goes without saying that a creative space with promise for young talent is a welcome addition, perhaps even a nod to its roots. In the early 20th century the neighbourhood became a fashionable place to eat for intellectuals, writers and artists. This made for Soho pub landlords’ establishment, a natural epicentre for the sex industry, small theatres, speak easies and a lively music scene. Today it embodies a smorgasbord of identities ranging from the gay village, Chinatown and of course, The West End.

The promise the Soho Revue makes is to bring some ‘edge’ back to the neighbourhood with ongoing panels, classes, and film and theatre presentations. If the crowd co-founders India Rose James and Will Pelham, attracted for the opening night and opening exhibition is any indication of this commitment, this is a space to watch. The Revue Gallery’s inaugural show curated by Victoria Williams and Marine Tanguy will feature work by eight young visual artists exploring a range of mediums. This includes Alison Bignon, Jennifer Abessira, Scarlett Bowman, Wendy Bevan, Maximilian Herbert, Walter Hugo & Zoniel. Their works will be exhibited alongside the three-screen cinematic installation Eleanor, which stars recent Golden Globe winner Ruth Wilson and was created by Alex Warren.

Alongside the launch of the space, The Revue, a central-London publication will provide young arts writers the opportunity to flex their word muscles and gain some exposure in the very competitive world of art theory.