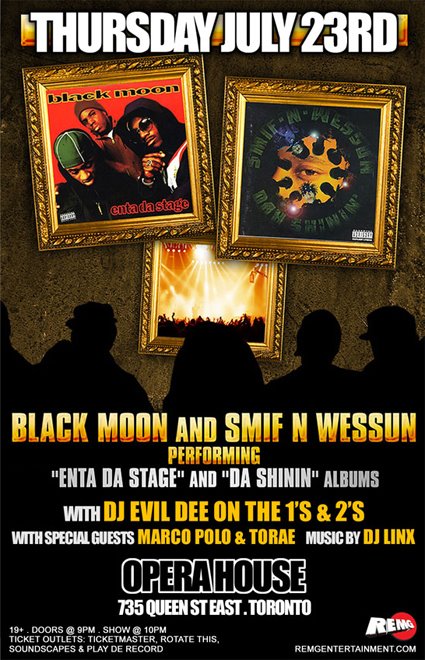 Two of the biggest and most influential hip hop albums of my youth were Smif N Wessun’s Da Shinin, and Black Moon’s Enta Da Stage. Both were released in the early to mid 90’s Enta Da Stage in 93 and Da Shinin in 95 and set the precedent for the grimy east coast rap that was coming out of New York at the time.

I can honestly still remember the first time I heard Da Shinin,on tape no less and it blew my mind. I still consider it one of the greatest hip hop albums of all time. I never got the chance to see them perform this album live, and by the time they came back to Toronto on tour they were then known as the Cocoa Brovaz, and they were not very good at all. So you can imagine my ecstatic joy when my buddy called me up to say that they were coming to town with Black Moon to tour their first classic albums.

In fact I was speechless… which is a rarity for me. Then I asked him to clarify, because I didn’t want to see either of the two groups perform anything but their first albums. He handed me the flyer, shown above, and I was set. I am so stoked, I can hardly contain myself!

Check out the videos by both artists below.

Black Moon – I Got Cha Opin by rikma