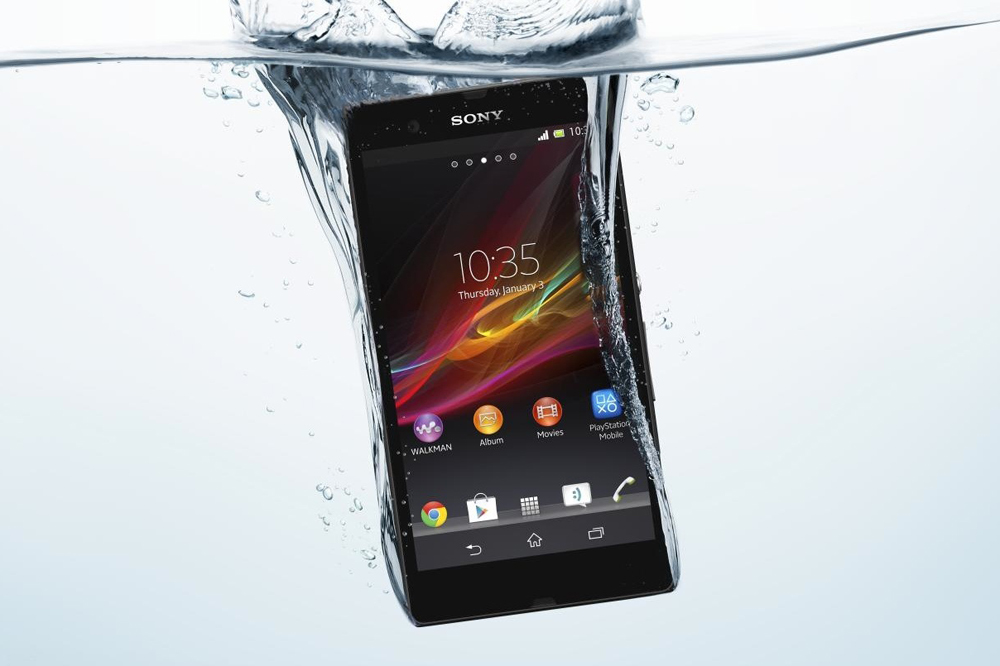 Have you ever been in the shower and wished you could look up that random fact you can’t stop thinking about? Or how about that YouTube video you can’t get out of your head? Or even browsing all those Instagram posts while going for a swim? Well now, with the new SONY Xperia Z1 you can do all those things!

The folks at TELUS let us get our hands on the SONY Xperia Z1 to take it for a test drive, and I must say I’m impressed by this waterproof phone. I couldn’t wait to test out it’s capabilities.

After going over the obvious restrictions to the waterproof aspect of the phone; making sure all ports and covers are closed, and the fact that it can only be kept under 1.50 meters of freshwater for up to 30 minutes but that it is not designed to float, I dove right in and started my tests.

After playing around with the phone and testing out the phone itself, something I’ll touch on more later, I began with the waterproof aspect of the phone.

The first thing I really did was take the phone in the shower with me and play around with it. I must admit, it’s rather difficult getting over the innate fear we have about our electronic devices getting wet. We’re really rather programmed to keep water as far away as possible from our cellphones, and it’s a strange feeling doing the exact opposite of that and using it while in the shower. However, at the same time, it’s rather liberating being able to browse YouTube to find a particular song you might not have access to otherwise. One thing I noticed, was that the water droplets actually bead up on the phone allowing you to blow them away.

The next thing I did was use the phone as much as possible in the rain. Again, it was weird trying to actively use my phone instead of protecting it from the rain, but it also made my life much easier. There was no more waiting to respond to texts or check my email until I got to a dry area, and I could browse Facebook while waiting for the bus in the rain. Instead of being miserable because it was raining, I was thoroughly distracted by my awesome phone I could use whenever I wanted too!

One thing I did noticed while using the phone in water, was that if there are too many drops of water on the screen, it won’t respond to your touch properly as if you have more than one finger on the screen making it difficult to click on things. However it can be remedied by simply wiping away the water, a small price to pay to be even able to use our phone in the water in the first place!

One of the lasts tings I did with the phone, and I really think I did this purely because I knew I could, was to fill up a glass of water and drop the phone into it. Now this might sound weird, but it was rather fun simply dropping my phone into a full glass of water knowing it’ll be perfectly fine. You’ll never again need to worry about dropping your phone in the sink or spilling your glass of water on it. It removes one of the many things we worry about when it comes to our cellphones.

Now I said I would talk about the phone itself and not just gush about the waterproof aspect, so here goes!

The phone itself is larger than most people might expect, however at the same time it is extremely lightweight and seems to fit perfectly in your hand. It has a nice large screen, which is ideal for playing games or even writing on as it doesn’t feel like your hands get in the way. Also, because it is so lightweight, it’s very easy to use the phone for extended periods of time without feeling like it gets too heavy or awkward to hold.

I had a blast playing and experimenting with the Xperia Z1. It’s extremely easy to personalize in precisely the manner you want, with a lot of the customization options being simple drag and drop commands. For someone like me who likes to have control over every little detail of their phone display, this is an extremely welcome addition. Having the option to change just about everything is not only fun, but allows me to make my phone unique to me.

Lastly, the Xperia Z1 is also equipped with a 20.7MP camera, so you can get the best possible pictures, and even the pickiest of photographers will be able to get that amazing shot they’re looking for.

The SONY Xperia Z1 is now available from your local TELUS retailer so make sure to stop by and test it out today!