The TIME 100 Next honours rising names in areas like entertainment, science, technology and sports. The youngest on the list is Alysa Liu, the U.S. figure skater that recently became the first American woman to land a quadruple Lutx in competition. TIME 100 Next also features Costa Rica President Carlos Alvarado Quesada, a leader who’s vocal about climate change and one that’s made a declaration to see Costa Rica fully decarbonize by 2050.

Those selected were placed into one of five categories: Artists, Advocates, Leaders, Phenoms and Innovators. Entries were drafted to highlight accomplishments and appeal, and certain honourees received additional praise from notable figures. Below are some of those pairings.

On singing together: “In all my years in this industry, Camila was the first artist I’ve ever told that she could pick whatever song she wanted to sing.”

“What means the most to him is playing hard for his teammates and coaches, setting a good example through his actions and making his family proud.”

“We’d known about Lili because of her role as Betty Cooper on Riverdale, and we were even more drawn to her when we saw how she used her experiences to advocate for mental health and body-image awareness.”

Jharrel Jerome received words from criminal justice activist Korey Wise, whom he portrayed in When They See Us.

“Watching Jharrel Jerome film scenes for When They See Us and witnessing his well-deserved win at the Emmys—he took home the award for Outstanding Lead Actor in a Limited Series or a Movie—was a life-after-death experience for me. Jharrel was my reincarnation.”

*Note: Korey Wise was one of five Harlem teenagers of colour arrested and wrongfully convicted of a rape of a white female jogger in 1989. The series ‘When They See Us’ retold this story.

“She built an empire before she was 30 years old! That doesn’t happen without hustle. And even better, she did it by herself. You don’t rack up millions of fans all over the world without being someone people can relate to. And people can tell Lilly’s real.”

“She brings so much humour, charm and a contagious energy to set every day. There are so many things I admire about her. One of them is her work ethic. She has a lot on her plate—including her recent role in the move Hustlers—and is always willing to go the extra mile.” 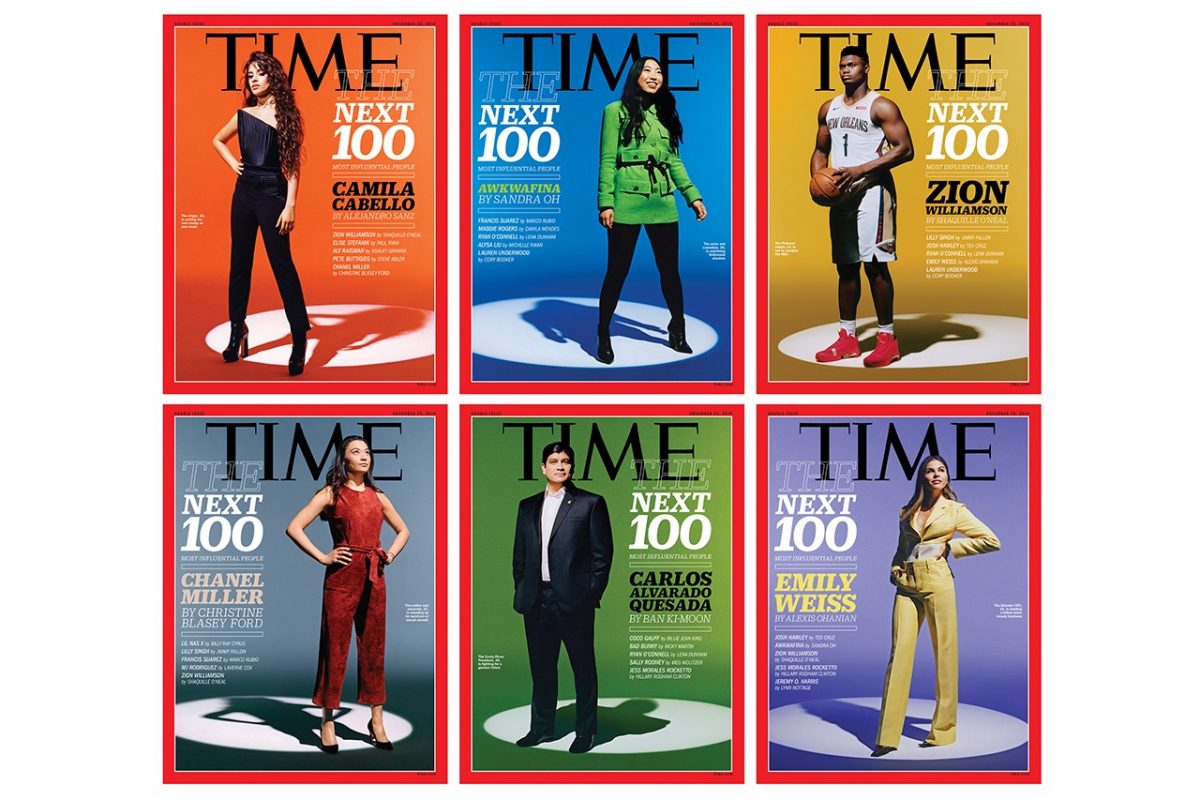 The first TIME 100 list was published 15 years ago and has become an annual cornerstone in showcasing powerful figures of the year. This new list marks acknowledgement for another 100 people.

“TIME has always been a barometer of influence — and the nature of influence is changing,” said editor-in-chief Edward Felsenthal.

The leaders were also celebrated on November 14 during the TIME 100 Next Gala in New York City.

“We’re living in a time defined by technology. We can wake up in the morning and live a busy, productive, interactive day entirely through our phones,” Raisman said to the crowd. “It wakes us up, delivers the news, keeps our schedule, connects us to people all over the world, entertains us—we don’t even have to get out of bed. And how’s that working for us? We’re so connected, we’re alone. We’re so distracted, we’ve lost ourselves…much of our reality is rendered through a screen.”

Awkwafina sat down to chat about her experiences attacking stereotypes and how the actual sound of her voice has helped her do that. Canadian actress Sandra Oh penned Awkwafina’s entry, and in it Oh praised Awkwafina’s timing and her ability to “hold many identities while simultaneously (and singularly) being herself.”

Awkwafina on fame: “That’s the thing about fame: it doesn’t change you, it happens to you,” she said during the 100 Next Gala.

Awkwafina on equality: “For me I think equality means inclusion and diversity being a staple as opposed to a requirement,” the actress and musician continued.

The night saw performances from Camila Cabello and another honouree, Maggie Rogers.

You can watch the 100 Next Gala below. It starts streaming around the 25:35 minute mark.