Recap: Foot Locker “Before and After the Bite” Gallery, NYC 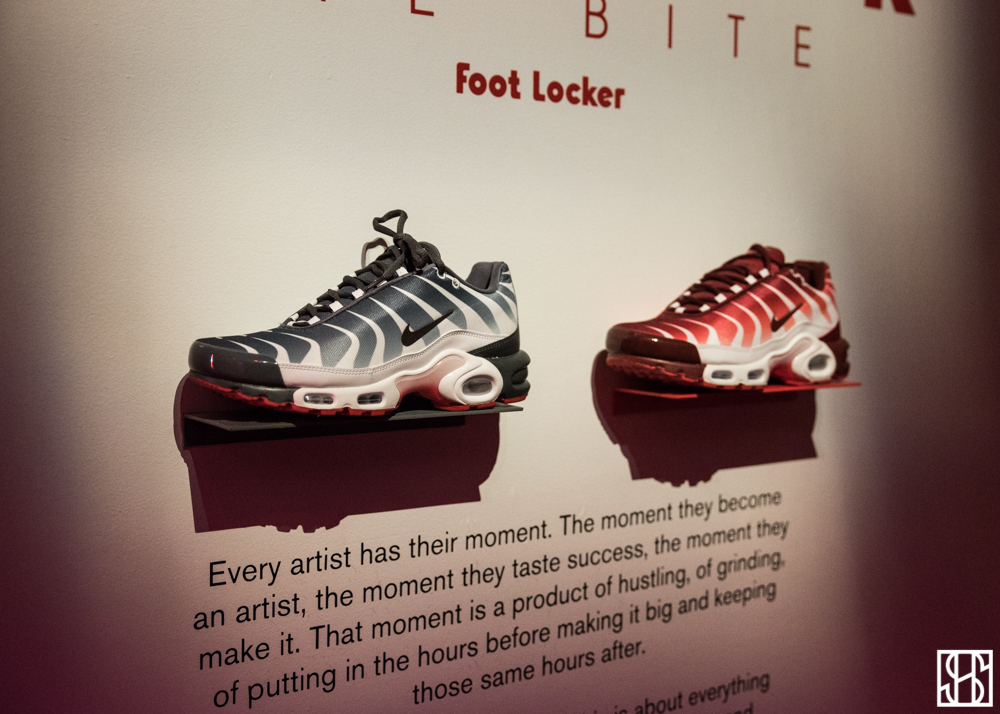 Foot Locker celebrated the release of two exclusive Nike Air Max Plus colourways last night with the “Before and After the Bite” gallery exhibit in New York City featuring community-submitted art from all over North America.

After a call for submissions was released earlier this month, artists had the opportunity to create pieces inspired by the two colourways and have their work reviewed by a panel of industry professional judges either online or in-person at the South Manhattan gallery. The panel – consisting of photographer 13th Witness, word-based artist Baron Von Fancy and colour aficionado MADSTEEZ – narrowed thousands of submissions down to just 20 that were displayed in the gallery on Tuesday evening and chosen to receive a pair of each colourway (which release in US and Canadaw

The Air Max Plus colourways are inspired by the age-old story of success. The dark grey “Before the Bite” colourway reflects the hustle required to achieve success while the red “After the Bite” colourway speaks to the hustle required to maintain that success. In addition to the storytelling behind the shoes, artists took inspiration from the Air Max Plus silhouette itself and the “shark”-like elements. 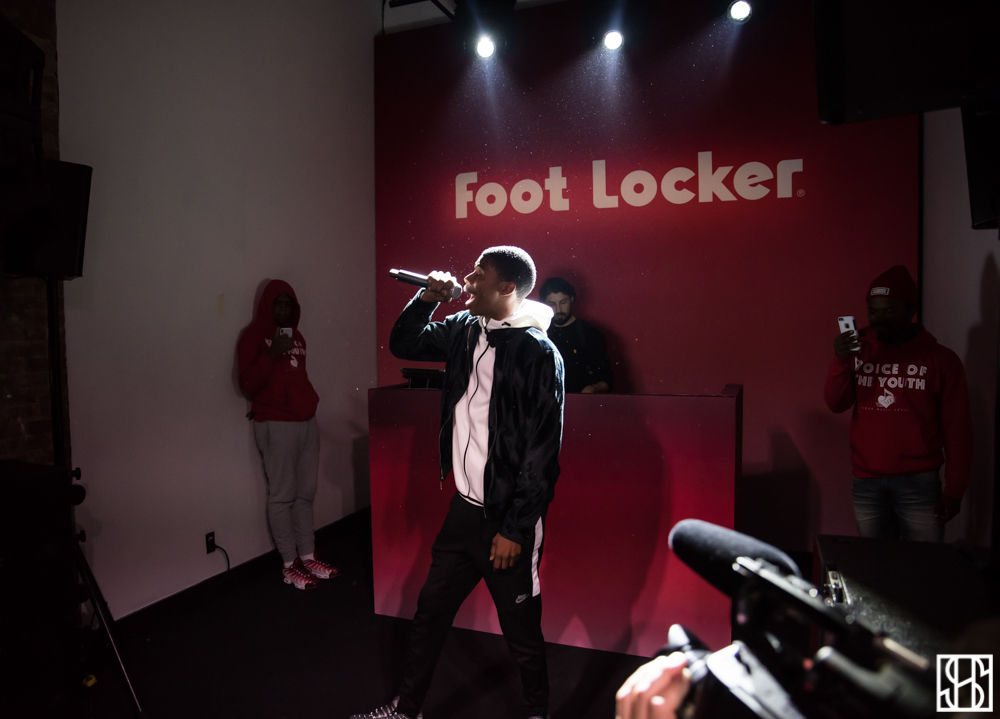 The evening concluded with a special guest performance from Philly rapper (and protegé of will.i.am) LGP Qua and the premiere of the official video for his track, “Hunger.”

We had the opportunity to speak to 13th Witness and Baron Von Fancy about Air Max’s, the process behind curating the gallery and the inspiration they found and Check out our interview below. 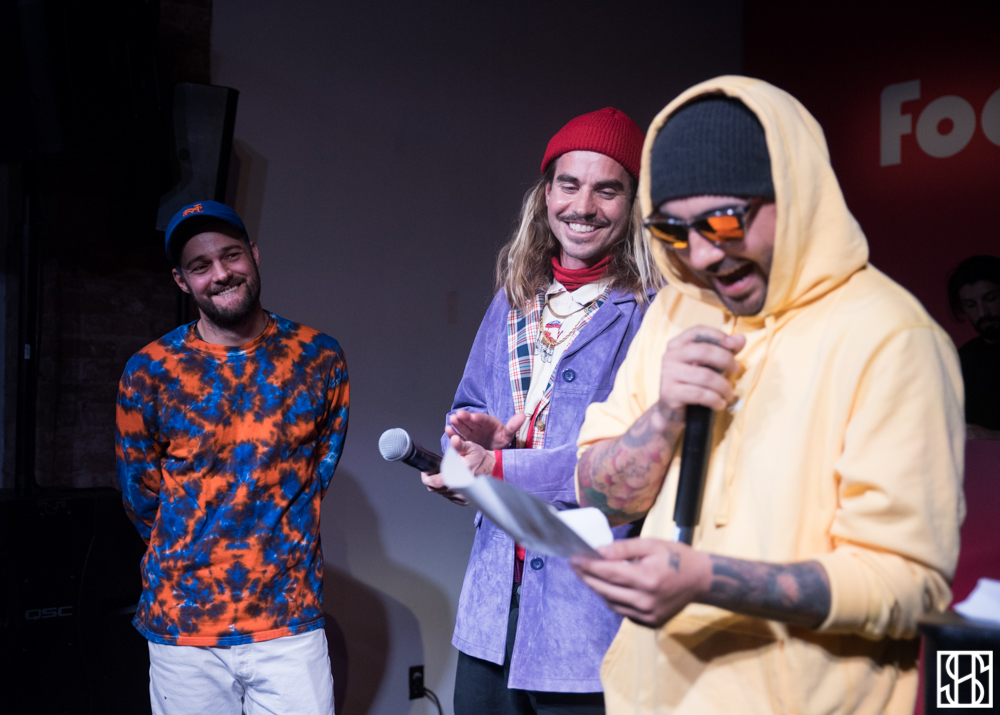 Sidewalk Hustle: Can you tell me a bit about the process of choosing all the pieces being exhibited?

13th Witness: I’m not sure about the exact number of submissions but I think we had something like 200 in-person submissions. It’s a lot to digest in a short period of time and I feel bad for the people coming and submitting because they have such a short amount of time to meet the three of us and explain their piece. I wish I had more time to see each one but there were a million people in line and it was freezing cold outside. I give all of those people props. Some of them were students, some people are working jobs and doing it just as a passion. That I can really respect because I can relate to that. Photography for me used to be a little thing I did for shits and giggles and now it’s my life.

Baron von Fancy: We had over 170 people in line and over 2000 submissions online. We sat here all day from 10 am to 5 pm for all of the in-person submissions and met with each artist individually. They were given the floor to discuss their work and present their art and then we made decisions from there. It was definitely hard to focus – honestly, I was just overwhelmed. When I go to a museum I’m always overwhelmed by all of the art. It was so fast that before they could finish explaining themself the next person was already coming up. But we were still able focus on what each person was bringing to the table and make decisions from there.

What do you think FootLocker was looking for you to bring from your world into theirs?

13th: I’ve always been into sneakers and footwear. I mean, shit, growing up in New York we had FootLocker and we had Sports Lane as the two cool sneaker stores. I remember going to FootLocker as a kid and FootLocker was always “that” sneaker store. So now being able to work with them and see all these kids get an opportunity to show in the gallery is really cool. And it’s really cool that Foot Locker would choose a selection like the three of us to check out that next generation.

BVF: I guess as an artist who has been there in some way. Being able to look at each individual person and the way they present themselves and their artwork – also if a show like this could help them better their careers. And that’s hard what they did, going in front of a group of people and blindly expressing yourself is a lot to put forward. And it was freezing and the line was long. I have a lot of love for all the people that waited in line.

Did you find some inspiration while going through all of these submissions?

13th: I don’t necessarily see inspiration for me but I see inspiration for the future. People are working real jobs – but at night or when they have free time, it’s like Batman and Bruce Wayne. It’s good to know that people are still pursuing their passions. Passionate enough to come out and be a part of something like this at least!

BVF: Yeah, I saw so much stuff. I do word-based art and I even saw some word-based artwork that I felt I had inspired as well as artwork that provided me with some inspiration. And people had come from far and wide. I asked and people had sat on buses for hours. I met a girl who came from Maryland or something after missing a bus. That’s real hustle.

Last thing – did you ever own a pair of Air Max Plus or Tuned Air coming up?

13th: I’m half-French and when I was growing up, this style was king in France. I don’t even remember these popping off in America. But when I would go to France and I’d go to French sneaker stores, these were the most popping style. If you had these you were killing it in France if you had these. It was the same as having a full Lacoste tracksuit. They were the creme de la creme.

BVF: I had a different kind of Tuned Air but yeah, I was into them and I love this style of shoe. I’m born and raised in New York so Air Maxs were always a part of my life. A staple.

Kind of a full-circle moment.