Porsche and TAG Heuer announced that they’re going to work together on what they call a “strategic brand partnership” that will carry on long-term with a plan toward new sporting events and product development.

The two brands have actually crossed paths more than a few times. Porsche first launched the 911 in 1963, and as the brand sought greater and greater notoriety in the racing circuit, Jack Heuer, took notice. By the 1970s, Heuer gear adorned race cars and their drivers, and they’ve each been in the same motorsport circles ever since. Most recently in 2019, Porsche created its own Formula E team with TAG Heuer as title and timing partner, adding another notch to their collaboration.

To further that point off the bat, Porsche and its Swiss luxury watch partner unveiled a new watch in the form of the TAG Heuer Carrera Porsche Chronograph. It’s a 44mm watch with a colour scheme that includes red, white and black to match the colours synonymous with Porsche’s Motorsports division. There’s an engraved inscription on the bezel, with the Porsche font also making up the indexes along the whole ring. 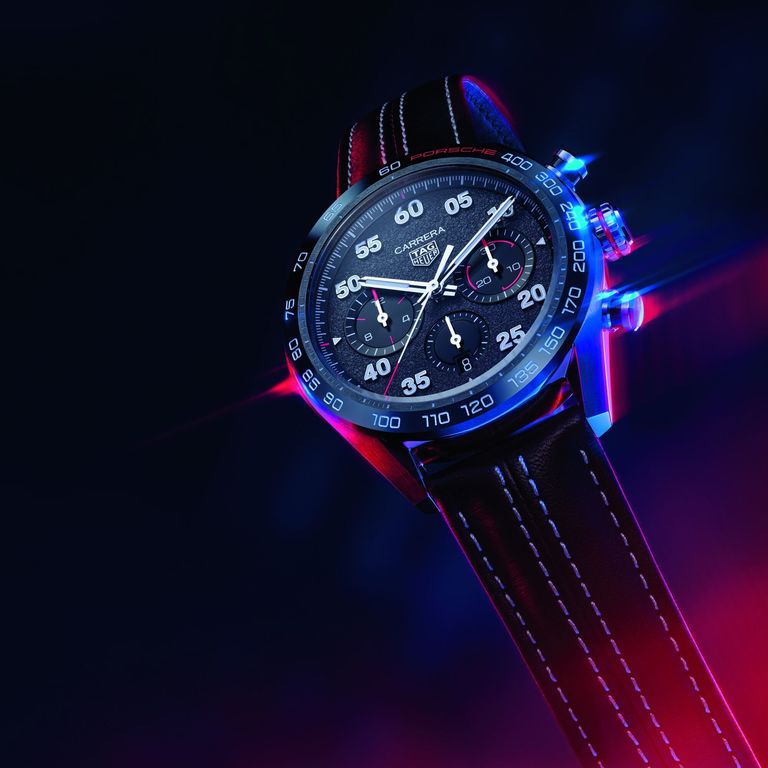 Branding displays on other elements, too. The transparent crystal case back is meant to resemble Porsche’s steering wheel and has both company names on it. The dial symbolizes asphalt with Arabic numerals made to look like numbers from the dashboards of Porsche sportscars. It will either come with a calf leather soft strap featuring stitching inspired by Porsche vehicle interiors, or it can come with an interlocking bracelet for a clean racing design look. Under the hood, the watch uses TAG Heuer’s Automatic 02 movement, made up of a clutch and column wheel, plus an 80-hour power reserve and 12-hour maximum chronograph measurement.

The new Carrera Porsche Chronograph will be available in the U.S. this month starting at $5,850 for the leather variant or $6,050 for the steel bracelet.