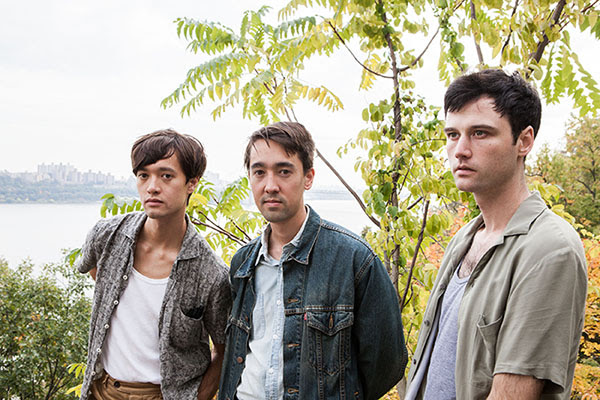 It’s been six years since California’s POP ETC’s last album, Souvenir, was released. Since then, the world has spun on multiple axes, it feels, crisscrossing with real-life chaos and making it harder for any of us to pay attention to one thought, or one project, on any given day. The same feeling holds true for the band’s lead singer-songwriter, Chris Chu, who says getting the inspiration to even create was challenging over the past few years and the previous album feels like a lifetime ago.

“Emotionally it just feels like everything now is coming from a place that feels less stable,” Chu tells Sidewalk Hustle. “A lot of groundlessness has seeped into my songwriting.”

“Slips Away” is the first single off the upcoming album, Over the Moment. The album features a spoken word contribution from actor and musician Jason Schwartzman, who first met Chu after attending the band’s show years ago. The two exchanged emails to stay in contact, which was a big deal for Chu since, as a L.A.-raised kid, he was a huge fan of  Schwartzman’s band, Phantom Planet, as well as his role in Wes Anderson’s Rushmore.

“Eventually we did this spoken word thing for a completely different song of ours but it didn’t end up working. Then when I was working on this track and wasn’t really sure where it should go, that spoken word popped into my head again, so I put it in and it just worked perfectly,” says Chu.

“I was a little nervous to send it to Jason but luckily he wrote back immediately that he loved it, so I felt like I was on the right track.”

The video for “Slips Away” was shot entirely in Thailand and stars STAMP, a Thai artist that Chu has worked with before, as well as other young Thai actors.

All of the work on the album was done in the heart of quarantine. Chu says he felt closer to the songs because of it although admits it was “probably less fun” than previous studio sessions.

“Still, I was able to really get into the nuances and the details of the recordings and performances and songwriting in a way that may not have happened otherwise,” he says.

The band worked with Brian Phillips (Walk The Moon, Elle King, Alec Benjamin) on the track, which took about a week or two of trading stuff back and forth, “although it has gone through like 30 permutations, so it’s all relative,” says Chu.

While he says it’s been “pretty difficult to want to release music,” Chu believes our connection to art is needed more than ever.

“There’s just so much going on in the world, and life is so unpredictable these days, it’s hard to want to take up the space and say ‘hey everyone look at this song I made!’ But on optimistic days I actually feel like art that makes us feel connected to one another is even more important right now,” he says.

Like many artists did during the pandemic, POP ETC started a Patreon account to better connect with their fans. Chu also credits meditation, walks, good food, family, friends, and music out of Japan for keeping him sane. He’s been jiving to Yumi Matsutoya, Hiroshi Yoshimura, and Toshifumi Hinata.

“I’ve also been going back to a lot of music from the 90s that I grew up with, so Weezer, Smashing Pumpkins, Nirvana, Third Eyed Blind, Sublime. Some have aged better than others, but it’s all nostalgic and fun for me.”

“I miss being near people.”

In the meantime, take a trip to your own nostalgia with POP ETC’s new track below. Stay tuned for more news on the album, which is expected out this year.