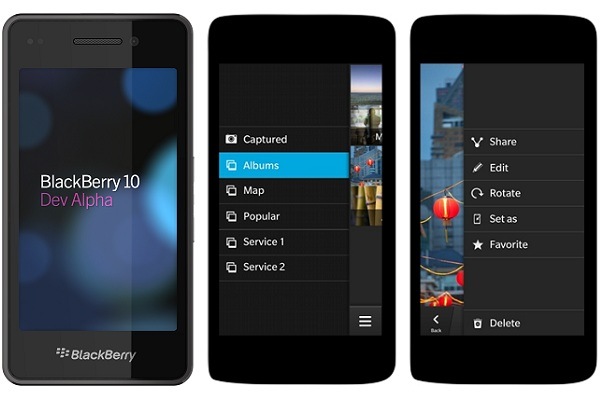 Recently I attended sneak peek of the upcoming Blackberry 10 on behalf of Sidewalk Hustle, and I will admit that I was surprisingly impressed with what the new Blackberry had to offer. Making drastic changes to their forthcoming phone, RIM is making a real, perhaps last-ditch effort to become socially oriented while still maintaining, and emphasizing their business side.

The hardware itself holds the possibility for change, but the model that I was previewing, the Dev Alpha B, was stunning. The phone was sleek and intuitive and it really did feel quite good in my hands.

The interesting thing about this phone is that it actually doesn’t have a back button. It relies solely on swipe technology. This takes some getting used too, but once you do it really does feel quite natural. Instead of constantly having to move away from what you’re doing to go back a page, you end up moving seamlessly from one app to the next. The driving factor behind this whole idea is Blackberry Hub, this is a command center of sorts for the phone where you can easily view and quickly access all of your notifications.

Another neat thing about the Blackberry 10 is actually its keyboard. There will actually be two types of keyboards available, the touch screen and a good old-fashioned QWERTY keyboard. The touch screen keyboard is quite impressive and has been built from the ground up by Blackberry’s developers. It actually shifts to your writing style and creates an invisible keyboard underneath the first one that assists your typing. It also suggests words as  you’re typing and can utilize up to three different languages.

Blackberry has always been known as a business phone and they certainly have not forgotten that while making this phone. The user can create two profiles, a personal profile and a business profile. Each one is completely separate from the other with its own personalization, photos and apps. However, you can still easily access your Blackberry Hub from each profile and view your notifications.

Honestly the most impressive thing to me was that Blackberry has a brand new, built from the ground up beautifully designed OS and keyboard. It’s evident that they mean business as they make their way back into the smart phone competition.

The official announcement for the Blackberry 10 is slated for January 30th so make sure you stay tuned.