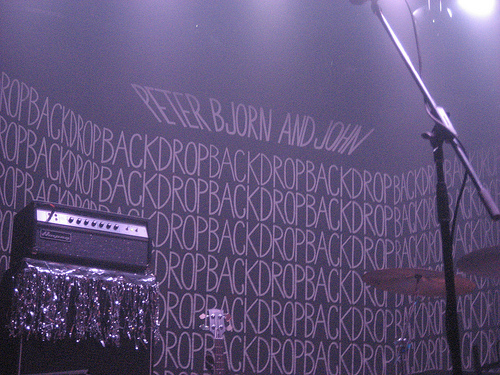 I was lucky enough to be treated to Swedish delights Peter Bjorn and John a second time last night at Phoenix. They surprised me yet again with their excellent musical abilities, crazy stage presence, and of course their cute outfits! But this time it wasn’t just their crazy talent which impressed me, but the friends they brought along with them!

Touring with best friend Sarah Assbring (El Perro Del Mar), who warmed up the crowd with her beautiful love songs and came back a second time to do the female vocals for “Young Folks”.  Later they played a song they had never before in Toronto (the name escapes me, I’m horrible with track names) calling up five other equally talented musicians to help out. Calling them onto the stage one by one, first their stage manager on guitar, a trumpet player, a clarinetist (I’d love to tell you his name, darn their cute Swedish accents!), a blonde vaired cow bell player, and one of the members of Au Revoir Simone who sat playing a tiny keyboard.  It was quite amazing to hear seven musicians play together from such diverse backgrounds (Peter announced where they were each from as he called them out, but damn the reverb, I couldn’t make it out).

For the last song in the encore, they did a cover song and brought out some Toronto band (a really skinny guy and a pretty skinny girl), but unfortunately I was unable to understand their Swedish accents yet again, so the name shall remain absent.

I really wish I could give you more specifics from the show, (and perhaps it’s all the drugs I’m on at the moment) but unfortunately all I can say is that Peter Bjorn and John and all their friends were truly rocked last night!