Painter Peter Howson is the Subject of ‘Prophecy’

“To be able to film the detailed brush strokes that Peter made was an athletic and balletic performance all day, every night.”

Peter Howson is an influential painter often referenced as one of the New Glasgow Boys, which are a group of young artists that trained at the Glasgow School of Art in the 1980s. In 1993, he was also an official war artist, commissioned by the Imperial War Museum during the Bosnian War.

The Scottish painter is the subject of Prophecy, which makes its international debut at the Hot Docs Festival on April 27. The film comes from British director Charlie Paul who previously directed 2012’s For No Good Reason on activist and artist Ralph Steadman. The film featured Johnny Depp, among others.

Prophecy was filmed over five months and the actual filming was done so with zero crew assistance—Paul lit, recorded and filmed for the entire four months. Paul lived in London and Howson lived 400 miles away in Glasgow, so filming was challenging. But that didn’t stop the men from not only filming but co-existing in the raw together.

“Even though we had sound recording always capturing the room sound, Peter and I would sit at the end of each day and talk for an hour,” director Charlie Paul tells Sidewalk Hustle. “This was my chance to feedback questions from the previous day and plant questions that were on the horizon.”

The shoot days were intense, he says.

“Because I filmed from the minute Peter arrived to after he left the studio it allowed the filming process complete access to the most intimate moments of the days,” he notes. “The action was recorded on four cameras positioned on important areas of Peter’s studio. Six microphones were positioned where Peter paints, sits and reads.”

Prophecy looks at the making of a single oil painting. We are introduced to Howson and get to observe his studio, but it’s hard to fully prepare for the creative madness that’s to come. Not until the apocalyptic formations begin to machete the canvas does the frame-by-frame chaos begin to unravel. Howson’s adoration, fascination, perhaps infatuation with eyes also unfolds.

“I’ve always loved painting eyes. They are difficult to do, but they are important. It’s to do with my autism. I could never look people in the eye when I was young, but I studied people and their eyes,” Howson writes in an email to Sidewalk Hustle. “Eyes are beautiful and I can communicate my love of all kinds of people through painting them.” 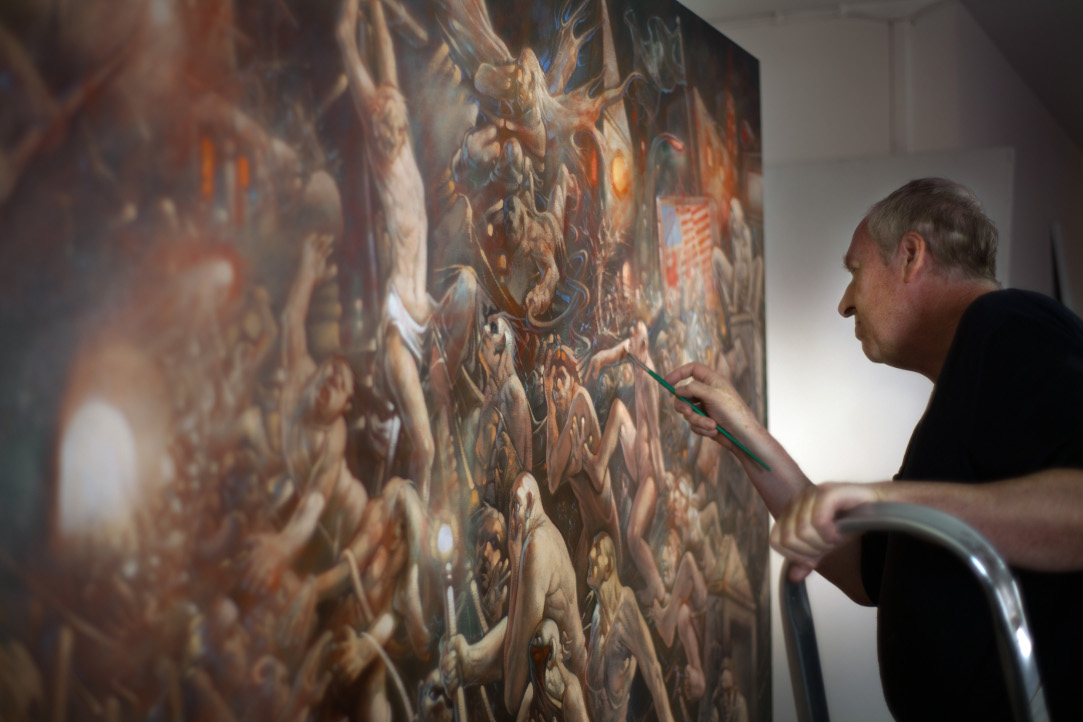 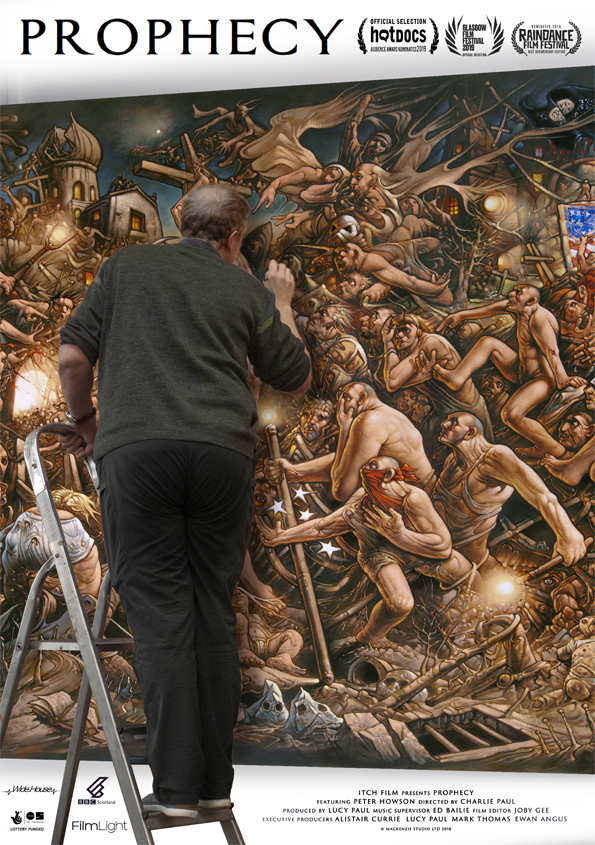 Howson cautions us throughout the film, making references to conflict and resolve. There is a sense of urgency delivered through eyes of agony and moving, life-size creatures. A ‘War of the Worlds’ feel lingers, and the accompanying music from Latvian artist Pēteris Vasks packages this frightful restraint well.

Investment bankers and musicians equally like Howson’s work and his collector base is strong. The film mentions one collector that has been a mainstay during Howson’s career, buying up expensive ($200,000 each) paintings. However, even after all the years and all the large sums of profit, Howson still considers himself “a craftsman who has to sell his work.”

And sometimes when you try to collide the world of creation with the making of a documentary, let’s say, it can be a very delicate rhythm to facilitate.

“With Prophecy, the continuity of the painting’s progress throughout the film created a simple linear path to follow in the edit, allowing these nuances and spaces to become punctuations without losing the focus, direction and meaning of the film for the audience,” Paul says. “To capture these intimate moments as a filmmaker, you need to be invisible and to become invisible you need to be as familiar as the dogs. The personal and intimate footage captured of Peter was only possible because he forgot I was there.” Paul says he achieved all this by being present and “always looking like you’re looking elsewhere, while always filming.”

Howson talks about the responsibility the public has to the artist. He speaks about the purpose of art and that it is to delight and inform. He also talks about the significance of The Last Supper with great interest.

“It lets an artist do paintings that encompass the whole of humanity in crisis,” he explains.”It reveals the battle between good and evil in human nature. You have to be inspired to attempt a ‘Last Supper’ [because] it is a big subject and it requires a lot of planning,” Howson writes. “Every human emotion is in it: fear, pride, compassion, pure love, jealousy, envy, courage, confusion, etc. You can probably throw in lust as well.”

Paul says his Howson “swings from restlessness to fulfillment” while working. His creative spasms guide the brush. Working within physical space requirements plus understanding how to adapt to Howson’s ever-changing process was key for Paul.  Paul says this process could not encumber Howson’s space, his routine or focus on the painting, But sometimes there were inevitably human hiccups.

“Every now and then Peter would launch himself backwards from an energetic brush stroke and fall into the camera, or I would trip backwards over a dog that had collapsed behind me,” explains Paul. Generally though “we worked perfectly around each other,” he says.

The film also touches on Howson’s drug use and how it’s interwoven into the fabric of his being.

In an email to Sidewalk Hustle, Howson elaborates:

“I was never a sociable drug user, I wanted isolation. It nearly destroyed my soul. It isolated me from God, and it cut me off from my source of inspiration. It never helped me to paint and it never gave me great ideas—just stupid and immature,” he says. “Unfortunately I am still an addict in my head during the weakest moments, and I face many trigger situations so I have to understand these, be strong and pray a lot. If I lose contact with my higher power then I am lost.” 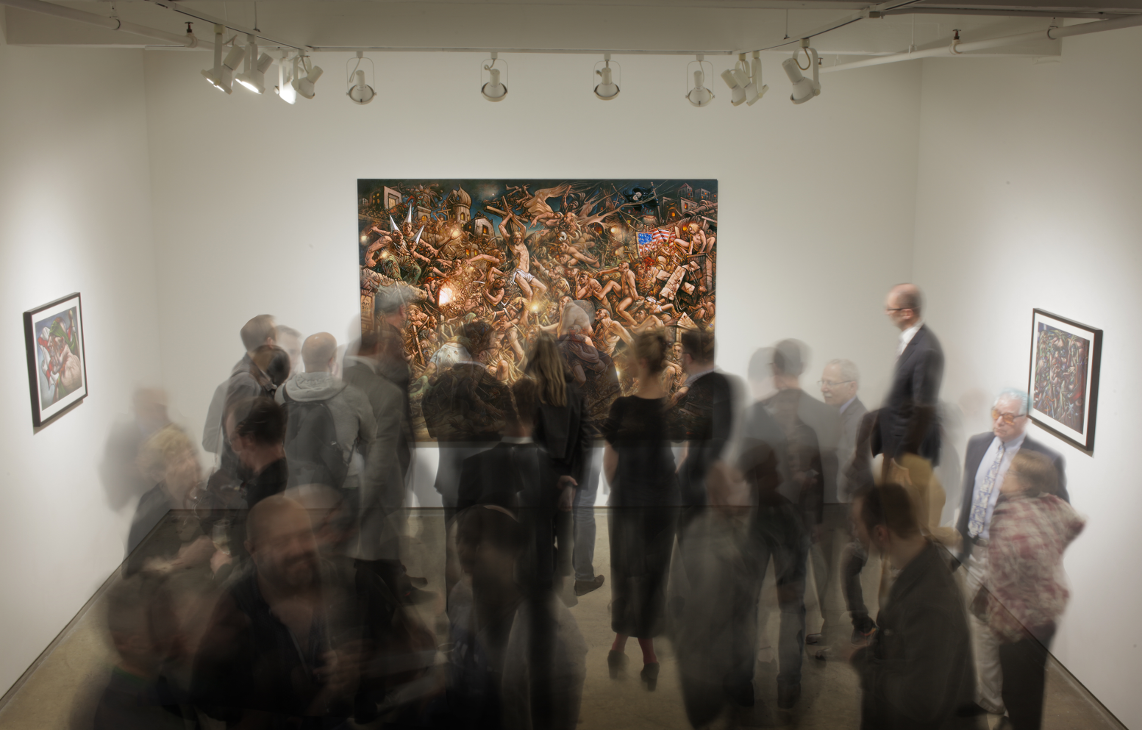 “All these energies run through your eyes when you stand in front of a Howson canvas. The emotion and admiration you feel are both overwhelming, which is an awesome human experience,” says Charlie Paul. “Peter’s work is exceptionally clever and talented on an enormous scale and the intention of ‘Prophecy’ is to place you in the middle of this beautiful and brilliant environment.”

Prophecy makes its international premiere on April 27 at the Hart House Theatre in Toronto. Director Charlie Paul and producer Lucy Paul will be in attendance. More details here.

Hot Docs, North America’s largest documentary festival, offers a selection of over 200 films from Canada and around the world to Toronto audiences of more than 200,000.

Hot Docs Festival runs from April 25 to May 5.