Our favourite talks from the 5th annual FinTech Canada Conference

Toronto Mayor John Tory declared the inaugural FinTech Week in Toronto to be held in the city annually from August 12 to 15. According to the statement put out by Tory’s team, Toronto is full of fintechs that come with financial service offerings and 21 per cent of these offerings fall into the payments category. Over 190 fintech firms exist in Toronto with 40 of them having opened since 2016.

One major part of the week was the 5th annual FinTech Canada Conference held at MaRS, Canada’s premier innovation hub. The one-day event housed speakers from companies and organizations such as Interac, IBM, The World Bank, Google and the United Nations, and the event received an introduction from Toronto Deputy Mayor Michael Thompson.

During the 5th annual FinTech Canada Conference much of the discussion was around monetary measures, security and innovation.

Two key questions to ask when starting a fintech company, particularly one that revolves around currency are:

2. How am I going to protect the data? 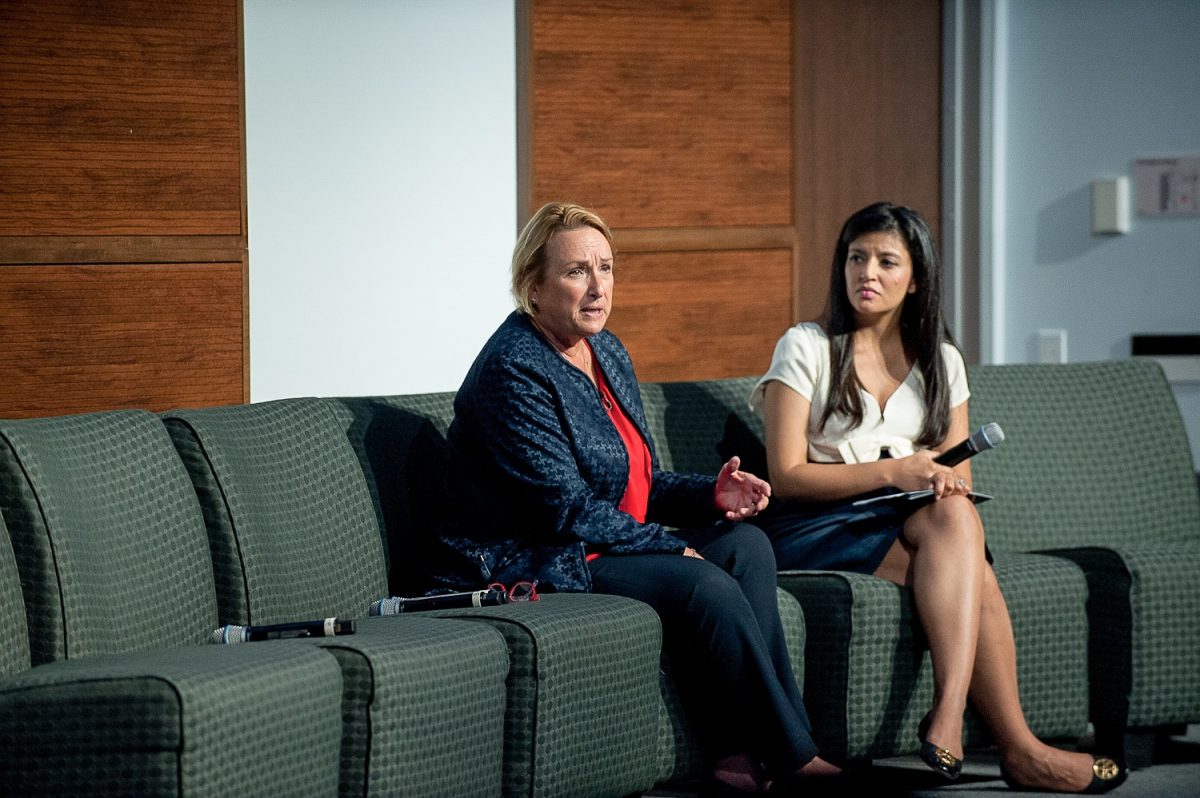 Maureen Jensen, CEO and Chair of the Ontario Securities Commission, speaks to Bloomberg’s Amber Kanwar and the audience at MaRS on August 14, 2019 / Digital Finance Institute

One of the standout talks heard was with Maureen Jensen from the Ontario Securities Commission. Jensen discussed a utility token, so a token that could be used on a gaming platform for example, as well as security tokens, which are more connected to capital. She also discussed regulation and its difficulty considering “there are around 2000 of these crypto assets in the world, held on roughly 200 platforms, none of which are regulated.”

“People are thinking that on these platforms they are actually trading a bitcoin when in fact there are no bitcoins on the platform. They are trading contract to contract,” said Jensen.

Trust and transparency was further echoed.

“If you want a marketplace where people have confidence there has to be some control, not about what you can and can’t trade, but controls need to be there so people know that if they put money on the platform there is a place they can call to get the money back. And that there are sufficient controls so someone just can’t log in through a back door and drain all the money.” – Maureen Jensen, CEO of OSC 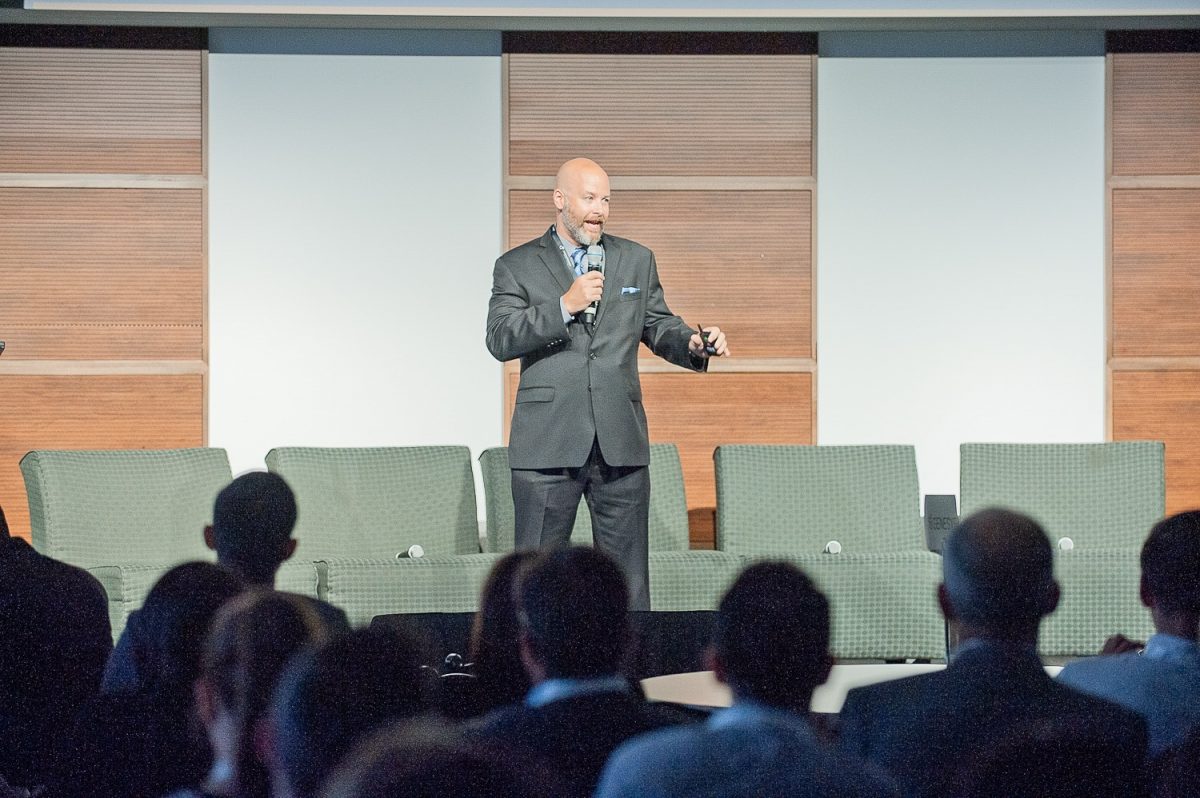 Another elevated talk came from Symantec’s senior threat intelligence analyst, Jon DiMaggio. DiMaggio outlined major risks to public security and safety, referencing the Lazarus Group (which apparently was named out of an adoration of DC Comics). He outlined how malware infects and dismantles businesses pointing to examples like the massive 2014 hack on Sony Pictures. To recall, this all started because of the movie The Interview. The group warned that if this movie (which received strong contention from North Korea due to its depiction and nature of content) was to continue there would be problems. And they weren’t fibbing.

“They wiped out most of Sony’s infrastructure and all sorts of private data, email correspondence, salaries and even movies that weren’t out yet,” noted DiMaggio. “The loss, not just financially, but the direct impact and reputation…the fallout is estimated to be in the billions.”

DiMaggio also notes that this was one of the first times that the U.S. government gave attribution to a cyber threat. He also discussed how these cyber attackers are getting smarter, threats are living online longer before being spotted, and malware is becoming increasingly harder to detect.

One of the funniest presentations of the week, no question, came from Planswell’s CEO Eric Arnold. The serial entrepreneur went through a laundry list of his jobs over the years, from how the porn industry mucked up one of his businesses, to how he dabbled in a platform to help indie musicians make money (which failed), to his ongoing journey as a father and husband as well as his successes to date. Stories from CEOs were a special touch to the experience and Arnold’s was inspiring and hilarious—after he exited the room was left with a real dose of chuckle-worthy reality.

One of the things to watch for are stable coins, which may be the future of legitimizing cryptocurrencies on a mass scale. Nicolas Cary, co-founder and vice chairman of Blockchain.com, delved into this subject matter the most. Stable coins essentially marry some of the great features that cryptocurrencies have with the stability of fiat-backed assets.

“Now we have digital representations of real world currencies that are actually operating out of regulative environments, so we integrated a digital stable coin which allowed us to put US dollars back into 40 million pockets all over the world, and that’s extremely exciting,” Cary said about the developments the company has delivered.

“I think we are really going to see stable coins proliferate around the world and be one of the most important stepping stones for us getting into this smart contract world because they have a lot less volatility,” he added.

“Whatever your philosophical take on digital currencies or cryptocurrencies may be, giving regular currencies digital properties does make a lot of sense.” – Nicolas Cary, co-founder and vice chairman, Blockchain

Photos courtesy of the Digital Finance Institute below: