The August long weekend has no shortage of festivals to choose from, and Osheaga did not disappoint the tens of thousands of fans that opted to attend the already-proven music and arts festival in Montreal each day. Young fans poured in from Quebec and its surrounding provinces (as well as many from south of the border) for three scorching –– and sometimes wet, but no one seemed to mind –– days of non-stop action. All were treated to memorable performances by Travis Scott, Arctic Monkeys, Florence and The Machine, and many more. 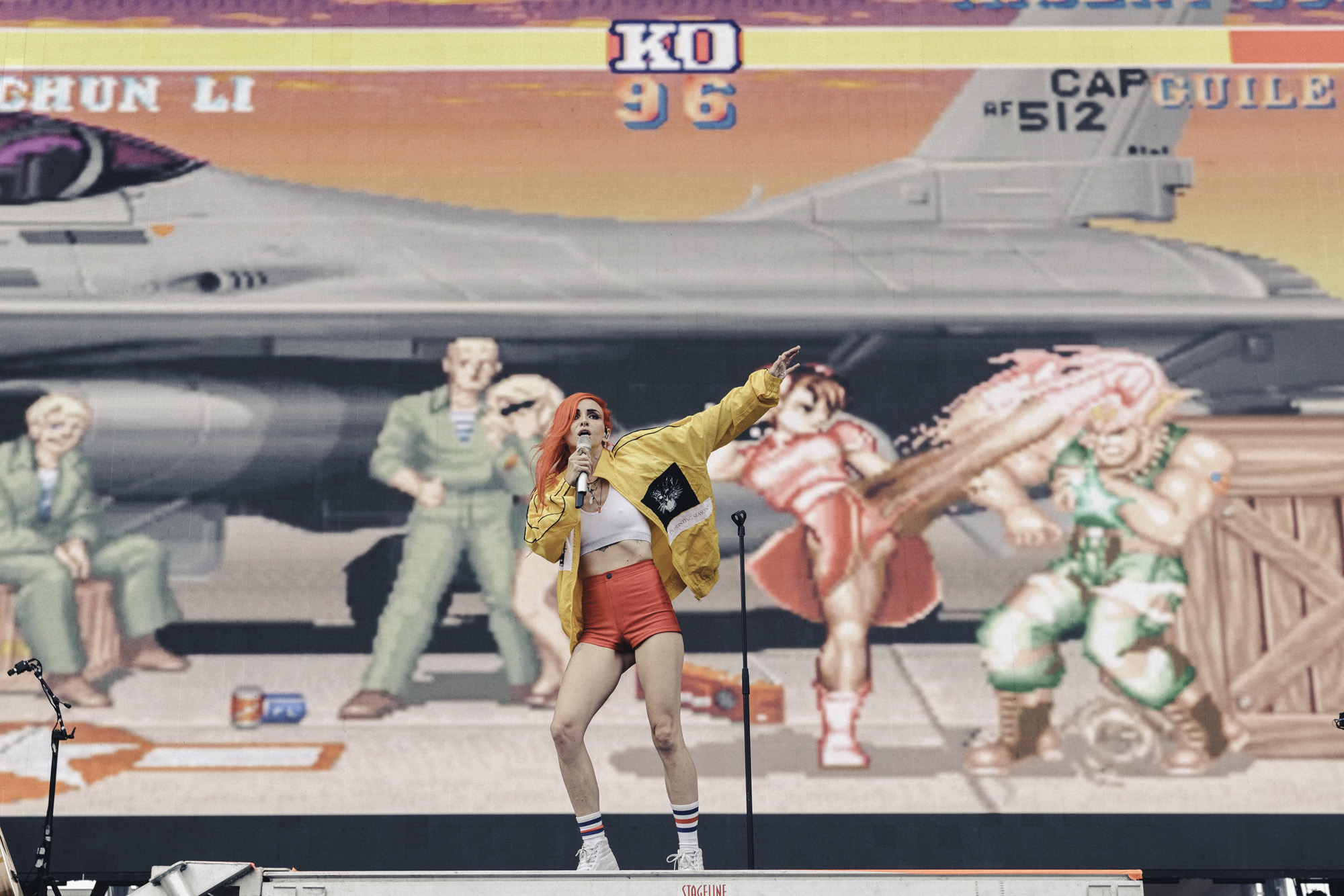 Lights
Kicking off Saturday on the main stage was Lights backed by some killer street-fighter visuals. She instantly had fans singing and dancing along, almost forgetting about the quick rain storm that greeted them at the gates just minutes before.

Milk & Bone
Jump ahead to the Vans Stage, electro-pop duo Milk & Bone got intimate with their hometown Montreal crowd, rolling through the tracks of their latest full-release “Deception Bay”.

Alvvays
With the heat really starting to kick in, Alvvays put in the work to get the crowd even hotter as the giant water guns on each side of the stage did the opposite. The result: drenched fans crooning with Molly.

The Beaches
Staying on the trend of insanely talented Canadians, The Beaches showed everyone why they’ve had such a successful year leading up to this summer. The crowd eagerly sang along to every ballad and chart-topping track, even begging for an encore. 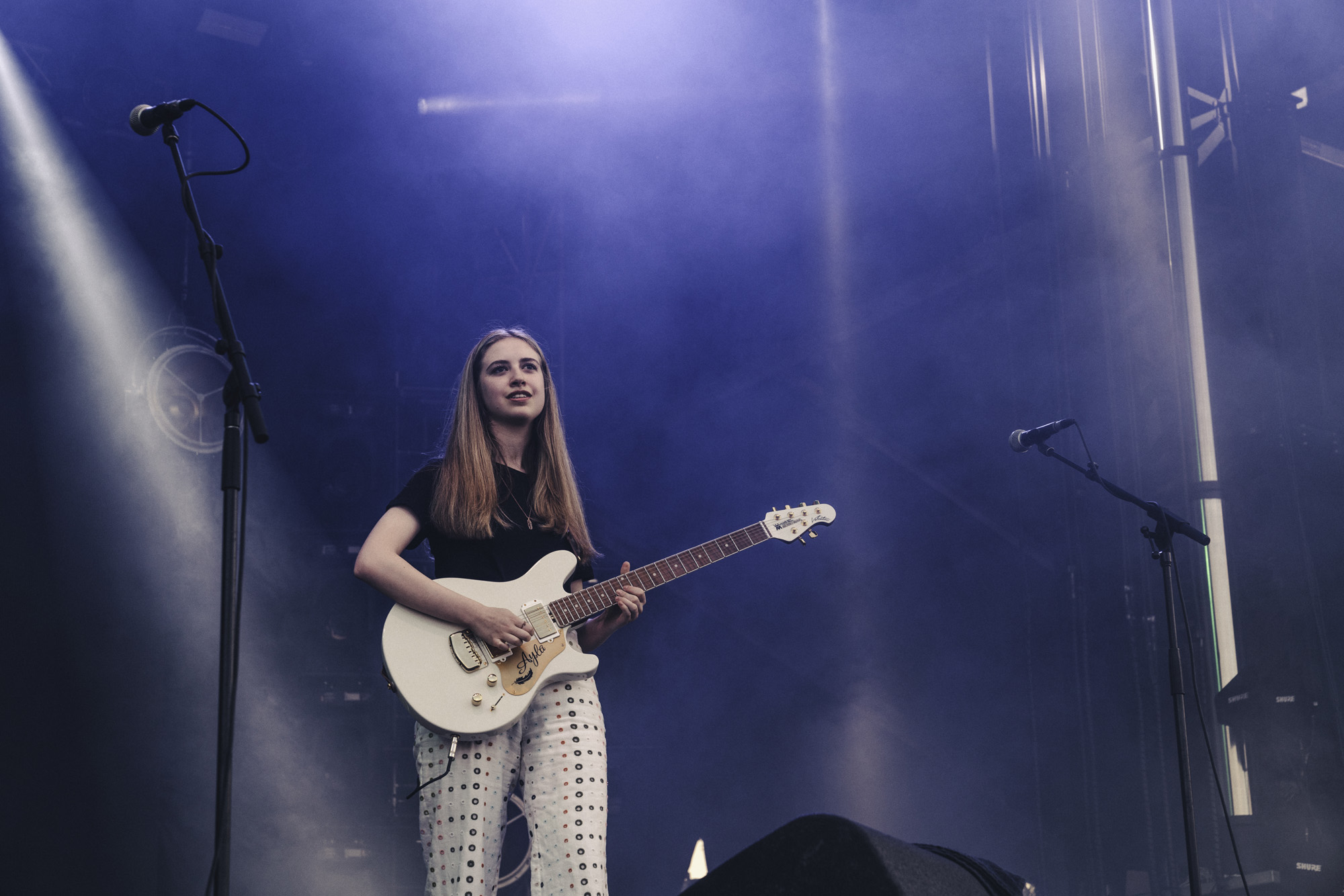 Calpurnia
Teenage-indie band Calpurnia stormed the stage and immediately had everyone swooning for them. Finn Wolfhard (note to self: don’t mention the whole Stranger Things-thing) fronted the band on vocals and guitar, performing some original tracks as well as some classic covers from Pixies, The Beatles, and Twin Peaks. 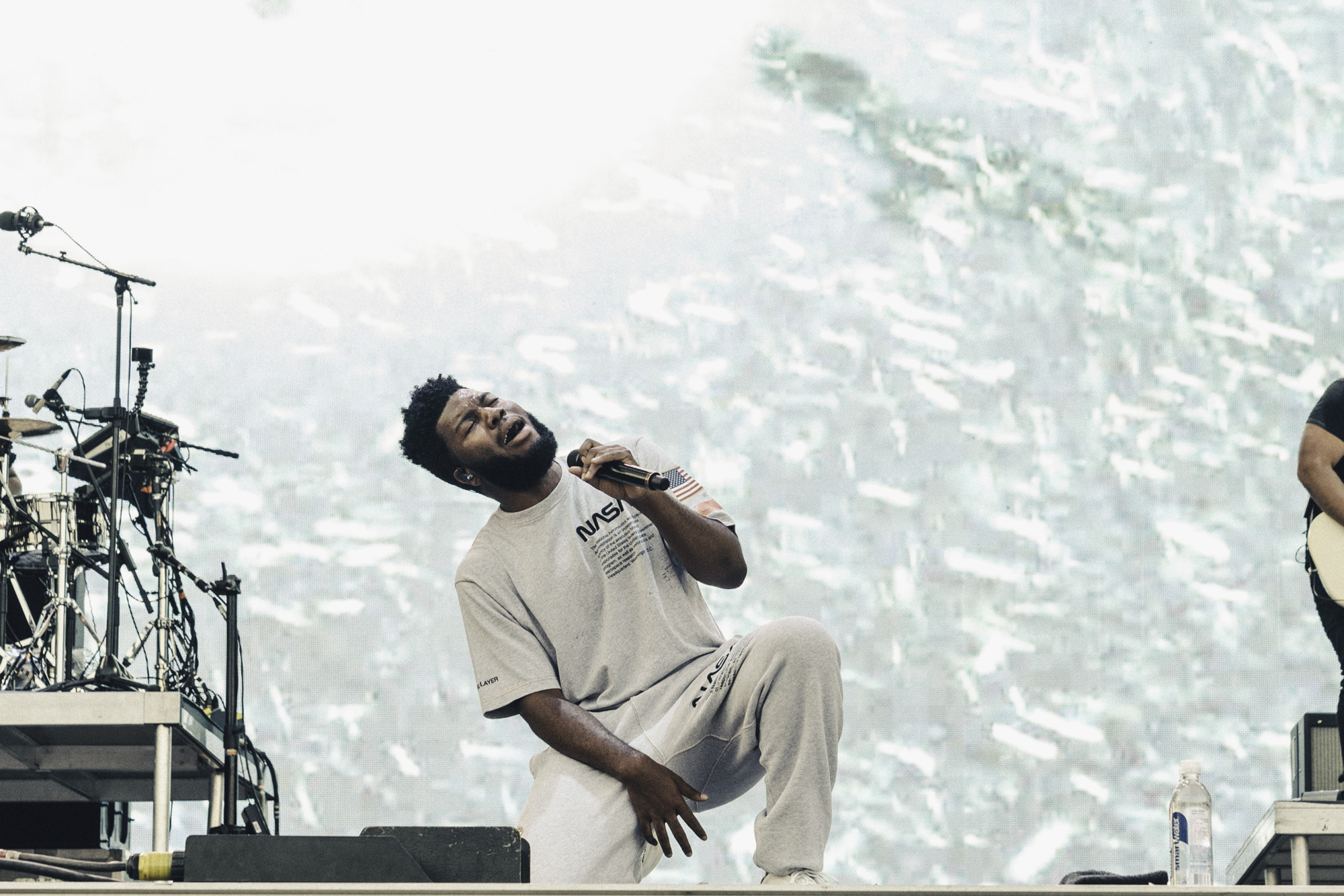 Khalid
Headed back to the main stage in favour of some sing-along-pop, Khalid danced his heart out in his NASA outfit, performing songs from his highly praised debut album including “American Teen”, “Location” and “Young Dumb & Broke”. He won everyone’s heart –– especially when he caught and cherished a rose a fan threw at him.

Anderson .Paak
As the sun finally set over Parc Jean-Drapeau, Anderson .Paak & The Free Nationals took the Mountain Stage and gave us all the energetic performance we needed. Going back and fourth between hyping the crowd on his feet and taking a seat on his throne behind the drums, Anderson reminded us how untalented and accomplished we all are in comparison.

Tyler, The Creator
A full crowd restlessly chanted for Tyler to come out, knowing exactly the kind of craziness they were about to experience. Tyler lit up the crowd with “Where This Flower Blooms” and things only got louder from there. He ran through a bunch of his new songs from Flower Boy, and dipped into some classics in the likes of “DEATHCAMP”, “Tamale”, and “IFHY”.

Arctic Monkeys
Fresh off the release of “Tranquility Base Hotel and Casino” (their first album release in 5 years, officially end their hiatus), Arctic Monkeys performed a 21-track setlist and reminded everyone on the island why they are rock & roll icons, as if they never went away. The hour and a half set was a perfect balance of old and new, finishing their encore with a reprised version of “R U Mine?”.

MSTRKRFT
By 1:00am, it was time to head to Newspeak bar for an Osheaga after-party. Walking in, the lights, smoke, and dancing bodies all led to the back of the bar. This is where the Toronto-Based electronic duo MSTRKRFT was setup, hypnotically controlling the movement of everyone floating in front of them, somehow topping the volume level of all the acts from earlier in the day.

Noname
Sunday started with Noname and good vibes. You may know her from her collaborations with Chance the Rapper or her debut mixtape with features from Sampha + others. If not, her contagious smile and honest conversations with the crowd amid her laudable rapping would have turned you into a fan. 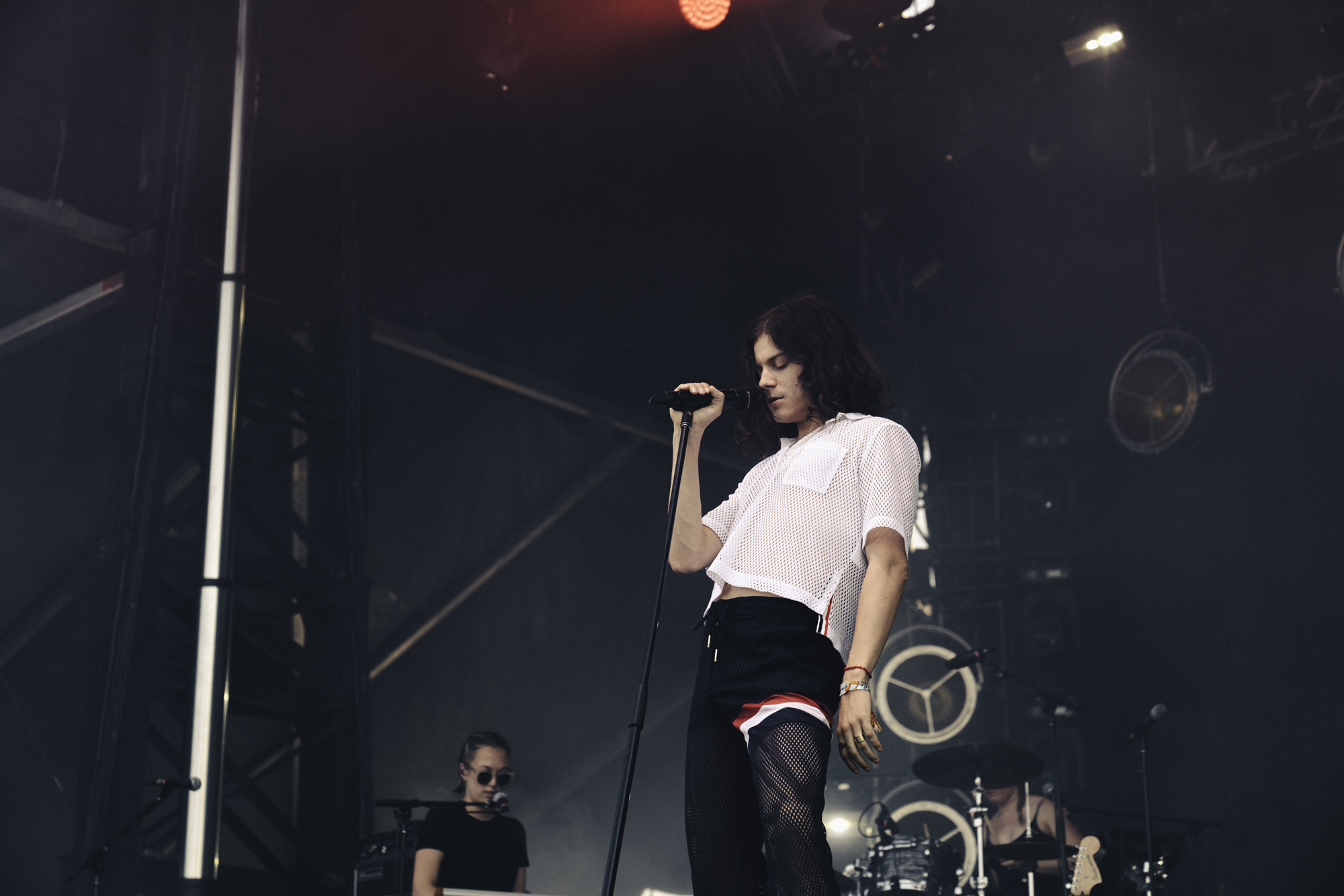 BØRNS
Draped in a mesh outfit only a handful of people can pull off, BORNS’ owned the Vans stage and his allure overcame everyone watching him play through his seductive setlist, including “Electric Love”, “10,000 Emerald Pools”, and “American Money”.

Dua Lipa
Still hot off the huge success of her debut self-titled album, Dua Lipa came to the festival ready to give her fans a performance they wouldn’t forget. Dressed in all white and surrounded by dancers in black, a digital backdrop stood behind them, housing colourful visuals that gave off major kaleidoscopic-tropical vibes to compliment their elaborate choreography.

Post Malone
After minutes of yellow smoke filling the main stage with anticipation, Post Malone appeared from the fog, repping a Beerbongs & Bentleys jumpsuit with two Canadian flags patched below the knees. Posty worked his way through his rap hits, then grabbed his acoustic guitar to slow things down for just long enough to make the crowd go even crazier when he returned to just his mic.

DVSN
Now post-daylight, it was the perfect time to chill out to some R&B with DVSN. The 3 backup singers made for beautiful harmonies behind Daniel’s silky voice. In the middle of his set, he selflessly pulled one of the singers to the front (Chantelle May) and had her sing a Beyonce cover followed by one of her original songs.

BROCKHAMPTON
Fans covered in blue paint anxiously awaited the arrival of the 5 members of BROCKHAMPTON. When they finally came sprinting and jumping out on stage, the crowd exploded like an ink bomb, opening up the blue mosh pits and letting loose.

Florence and The Machine
Florence majestically graced the stage in her flowing pink dress (sans shoes) along with her full band behind her. She sang beautifully –– her voice just as strong as in the studio –– and shared words of positivity to everyone on the island, ending the weekend (and her 15 song set) on a high note.