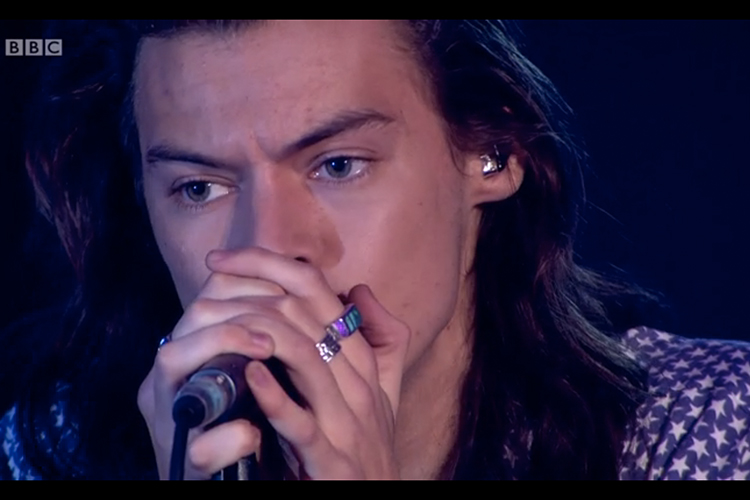 One Direction performed six tracks on BBC Radio 1 Live Lounge, two of which were covers. Fans have begged the group for a long time to participate in Live Lounge and they’ve finally come through. They’ve been touring non-stop for nearly five years so it’s possible a Live Lounge wasn’t in the cards until now. Their fifth and possibly last album Made in the A.M. is out tomorrow via Columbia/Sony.

Thank you so so much to @onedirection for that stunning Live Lounge! The videos will be asap! #1DR1LiveLounge pic.twitter.com/21YqlfhqnE

Before their set, Greg James asked the four-piece a few questions about their impending hiatus. Harry Styles was on vocal rest and had to answer via a robot app on his phone. Niall Horan said he will be working on his golf game during his time off. Liam Payne wants to write songs during his break. He also said he’d like to live life so there’s something to write about. Louis Tomlinson shared his plans to write with Payne but also work on his label imprint, scouting new acts. The band have been incredibly busy, jumping into album promotion immediately after wrapping up the UK leg of their On The Road Again tour.

Despite being on vocal rest, Styles showed his versatility and range. His verses on their first ever Live Lounge cover “FourFive Seconds” show the kid can get soulful if he wants to. For their last song, One Direction performed “Torn,” the song that basically started it all for them on The X Factor five years ago. Greg James presented the band with their BBC Teen Award for Best British Group at the end of their set. Watch them perform Natalie Imbruglia’s “Torn” below.