On The Rise: Declan McKenna

We’ve seen our fair share of teenage singer-songwriters, some more assertive and in control of their careers than others. As quickly as the music industry is changing so are the ways in which a talented young creative person can go about realizing their dreams. YouTube and Vine stars have turned their huge followings into acting or singing careers, landing huge endorsements, etc. Enter Declan McKenna who could have gone that route but broke into music somewhat traditionally. He won a songwriting contest. A pretty big one.

The Glastonbury Festival Emerging Talent Competition invites unknown and unsigned British and Irish musicians to submit an original song for a chance to perform on one of the festival’s main stages as well as a £5,000 talent development prize. In 2015, McKenna won the prize with his controversial song “Brazil.” Fast forward to 2016 and he’s signed with Q Prime management (Foals, Metallica, Muse) and Sony, touring with The Head and The Heart, and working on his debut album with James Ford (Arctic Monkeys, Foals, Florence & The Machine). Not bad for a 17-year-old and the youngest of 6 kids.

We spoke to McKenna before he opened for The Head and The Heart in NYC and it’s very clear that none of this was a whim. He writes about serious topics (corruption, transphobia) and he’s quick to defend his generation against its critics. We chatted about the U.S. election (terrifying), Brexit, his love of Twitter, and how supportive his family has been.

Declan McKenna is on the rise. Read our interview below. 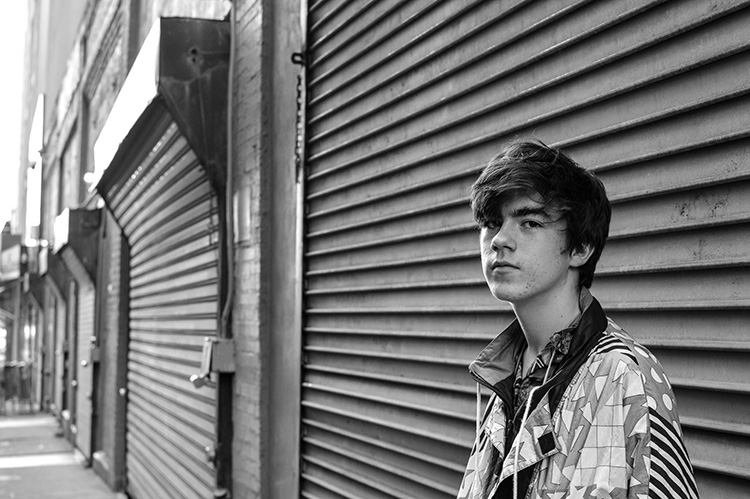 Sidewalk Hustle: Tell us a bit about yourself. How did you get into music?

Declan McKenna: I’m Declan. I’m 17 years old. I’m from Hertfordshire in the UK. I guess I’ve just always been into music. I come from a family that plays instruments and stuff. It was just a gradual thing. I’ve always been writing and trying to do something. I guess, I just recorded one of my songs with this guy who got in contact with me after hearing some of my demos. That was “Brazil” and that just kind of got picked up by a couple of people and I’ve done Glastonbury and all that. Now, I’ve come out and done all this touring that I’m doing now.

SH: That was a pretty good plan then.

DM: Yeah, it’s pretty unexpected to have stuff work out so easily. From completely nothing to being a signed 16-year-old.

SH: You said your family was always musical. Were you always trying to find a way into music?

DM: For the last couple of years, music has been the thing I’ve enjoyed doing the most and something I’ve put a lot of effort into. I always had so many ideas about what I wanted to be, what I wanted to do, but I feel this is what stuck out. I really, really enjoy doing it.

SH: What’s been the biggest change in your life since winning the Glastonbury Emerging Talent Competition?

DM: So many things have changed, really. Maybe getting a band! Having a band was a big change for me. I always wanted to do it but I never had the money to pay people. I didn’t really know anyone who wanted to dedicate themselves to it. Once I had all the backing from the label, I could. I wanted to do it for such a long time but it never worked out. So that was cool. Other than that, just having people care about these songs, aside from family and friends. You get past a certain point where people you don’t’ know care about the music you put out which is cool.

SH: Do you have the kinds of friends who make fun of you for it? Like “Oh, saw you on BBC, eh.”

DM: No, they think it’s kind of cool! I mean, after a while they do get bored of this kind of stuff. “Ugh, Declan was on Jools Holland.” No, they’re all very supportive. My family is very into it. They’re my biggest fans really. My dad up until reasonably recently was our tour manager and driver so I’ve got a very supportive family who are very happy for me.

SH: Do you have siblings?

DM: I have 5 older siblings.

SH: Wow! Well. Are you pretty close in age?

DM: Yeah, kind of close. A lot of people think, oh, they’re twins or is it like two dads? But no…

DM: Yeah, good timing. I think the opportunities I’ve had have been helped by the fact that I’m the youngest of 6 kids so after a while parents are like “Ah, nothing bad’s gonna happen.”

SH: Yeah, you can deal with yourself at that point.

DM: I can deal with myself (laughs). At 17, I’ve been able to tour the U.S. without any family members, which is odd but cool. I really enjoy doing it. Nothing bad has happened as of yet.

SH: Your songs are pretty different from each other. A different vibe with each one. Is that intentional or are you experimenting?

DM: I guess because it’s not been a very consistent time with writing this record. Between the age of 15 and 17, so much has changed, so much has happened. I haven’t got into the headspace where I’ve wanted to make an album that sounds like this or that. I haven’t put anything into much of a box. Especially with a lot of streaming and playlists and that world, I don’t think it matters as much. It’s good to make an album that flows, which is what I’m doing. Genre-wise, I’m essentially trying to care more for the actual writing of the songs rather than the style. I think a lot of people can get caught up in sounding like something but when you actually listen to the songs, they’re not as good as they could be because they’re trying to fit into a box.

SH: Do you write them first then figure out what they’re going to sound like later?

DM: It depends! Sometimes you have a clear image in your head. Often that changes once you get to recording. It also depends on who you’re working with. I’ve found working with James Ford has been great for that. He’ll develop things in a way that I really like and I’m happy with. I’ve been messing around, not really trying to restrict myself with this first record. I think later on I’ll do something more conceptual. Now, I’m happy doing this.

SH: Is there a tentative release date?

DM: April-ish is what I’m saying but don’t hold me to it. 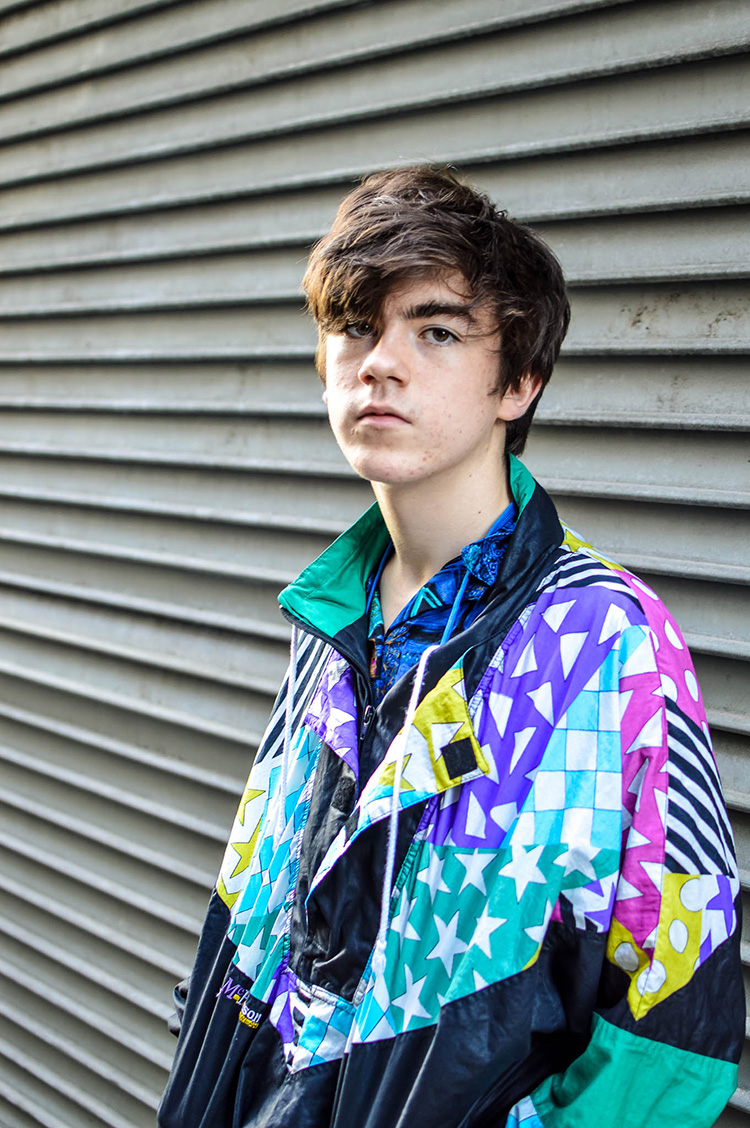 SH: You’ve been pretty outspoken, not just on your social media, but in your music.

DM: Yeah, when I don’t have much to write about personally, I just tend to look elsewhere. See what’s happening, what I think is interesting, what I think people should be talking about more. It just depends. It is quite an intense thing because you have to be on the ball and be ready to talk about these things when people ask about them. It can be difficult when it’s like “I don’t know. I just wrote this song.” I think I’ll keep doing that for a while.

SH: There’s this perception that teens don’t know what’s going on but you have internet. Of course you know.

DM: More so than any generation before this point, mine is the most informed. There’s so much information. There’s an infinite amount of information on the internet all around us. I feel like young people are very informed and we should have more of a voice about certain things.

SH: You’ve been keeping up with U.S. elections.

DM: I have. It’s an interesting one…

SH: Most of us can’t believe this is where we are.

DM: That it’s gone on so far! It’s partially a joke and also terrifying. How people, well one person in particular, can be very dangerous for the country and a lot of people living in the country. It’s not the best of times.

SH: We had a laugh over the summer over your Brexit and then we just took a turn here. Are people still frantic about it?

DM: I think people feel misinformed. I wasn’t allowed to vote in it, which I’m not exactly happy about. I feel like a lot of people who did vote and have seen figures like “350M For The NHS If We Leave Europe,” days after the referendum realized it’s not gonna happen. They’re rethinking and realizing. The problem with Brexit is that people don’t know what it means. What it actually entails is really difficult to know because it hasn’t happened before. The EU has a lot of perks for the UK which for a touring musician is going to make things more difficult. I’m not a fan. We’ll see what happens.

SH: You mentioned a bit about how music is marketed, streaming and playlisting. Are you pretty involved with the business side of your music?

SH: Yeah! They’re very good! Is that your favorite form of social media?

DM: Snapchat is good. I don’t use it as much as I probably would. It’s not as quick as Twitter for me. Twitter is like, I think of something stupid and I tweet it straightaway. Twitter is the one for me. There’s so much of it. It’s short so you can post as much as you like whereas Instagram/Facebook you have to be a little bit more chilled out. Otherwise people are like “What the hell?” You can do a lot on Snapchat but I never get around to it. When I’m having a good day on Snapchat, I go pretty hard.

SH: Last question. What music are you excited about at the moment? What are you listening to?

DM: I really like clppng’s new album. They just did a remix of my song “Isombard.” I’m a massive fan of them. The new album is a lot more conceptual than the last one. I’ve been listening to NAO. She’s really good. The Lemon Twigs. They’re cool. They’ve kind of come from nowhere. I was playing this festival in Amsterdam where they were playing and a friend recommended them. They’ve only really got one single out or something. 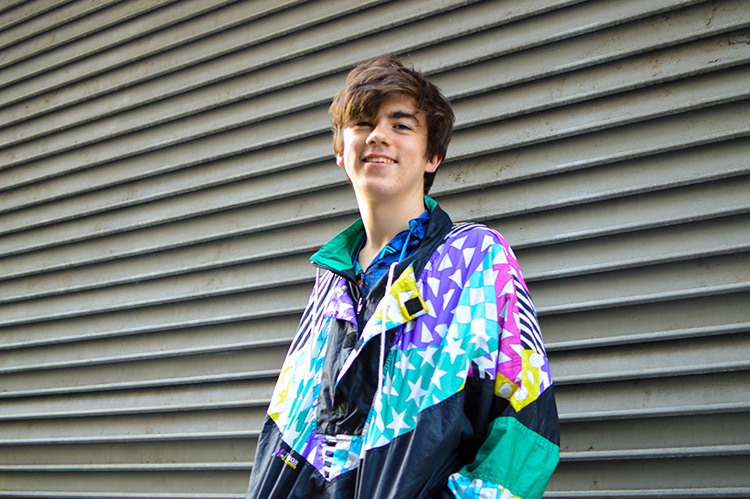