NXNE 2013: Fucked Up at Horseshoe Tavern 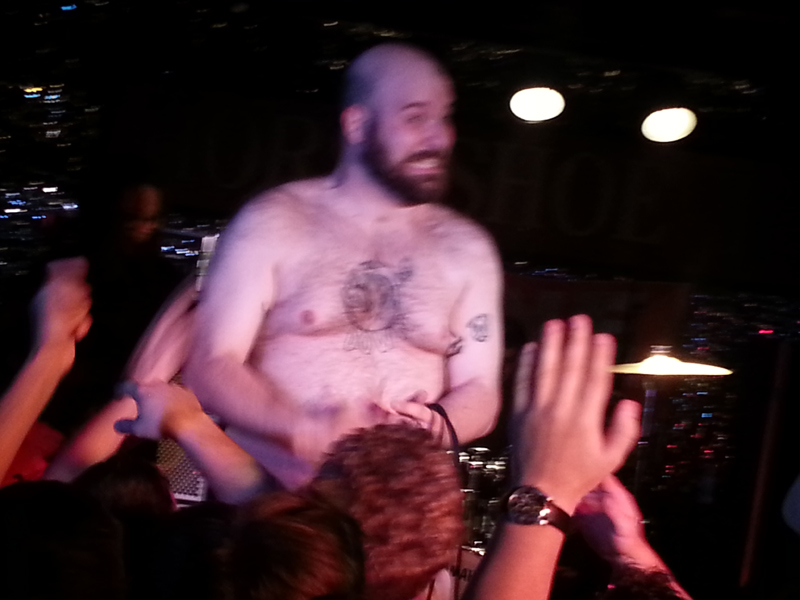 Performing for over a decade, Toronto hardcore punk band Fucked Up take the stage at The Legendary Horseshoe Tavern like legends themselves. I had a hard time trying to convince my friends to go to the show with me. The electronic and hip-hop acts going on at the same coveted 1am NXNE time-slot sent a lot of my pals to different bars across the city. This doesn’t matter at a punk show. The second Fucked Up because visible, everybody rushed the stage, fusing a bond of sweaty bodies and flailing limbs that would be all consuming for the hour long set.

So Fucked Up’s front man Damian Abraham/Pink Eyes is your new bff, belting out tracks with unmatched energy and enthusiasm. He literally looks deranged at times, making faces that resemble Jack Nicholson looking through the busted door way in The Shinning. Shit was incredible.

The set continues to intensify. Mr. Damian looses his cap and his shirt and fans start flying through the air, surfing over the crowd and falling on to the stage. We’re all best buddies now so we pick each other up before smashing into each other again. Fucked Up is awesome because and they still do it like they love it, every fucking time. The energy from the band is reciprocated by the fans and back again. This band was built on the caliber of their live show and mosh pit is the best place to see it from. I had a really good time. It kicked my ass.