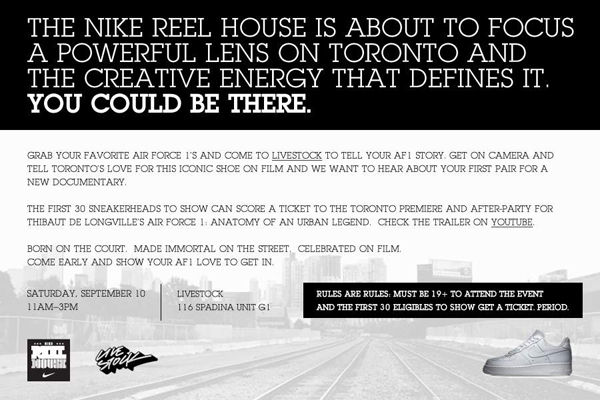 It is a well known fact amongst Sidewalk Hustle readers, that I have a long time love affair with Nike Air Force 1’s.  So we are ecstatic to announce that this year, during the Toronto International Film Festival (TIFF), Nike will be premiering their “The Anatomy of an Urban Legend” film. The film explores the history and cultural impact the legendary shoe has had on an entire generation.

Watch the trailer below and check the details:

Pay close attention, this could be a chance for you to be immortalized in film. This coming Saturday Nike is bringing down an AF1 Documentary Video Booth to Livestock Toronto to capture the story behind your favourite AF1′s. Bring your favourite AF1′s down to the shop this Saturday, and tell your story behind the kicks, your clip may be chosen for an upcoming Nike documentary.