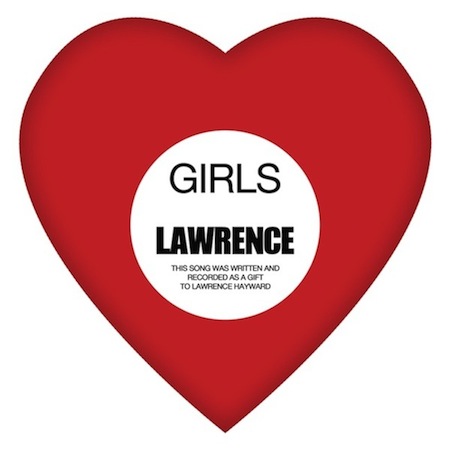 We’ve been spinning the new GIRLS vinyl a lot lately and they’ve gone ahead and released news today of a new single “Lawrence”, which will drop in the form of a limited edition heart shaped vinyl on November 28th.

Frontman Christopher Owens says the track, that he originally wrote back in 2008 was “written and recorded as a gift to Lawrence Hayward,” of the band Felt. Though we don’t have the track to share with you just yet, below is the track and an excerpt from a letter Owens wrote to Hayward a few years back that’s been circulating the internet today.

I once wrote this song and wondered what you would sing to it, I could sometimes hear your voice but I didn’t dare write down any words. I never thought for a second you would ever hear it, I wondered if you would like it, all that. I called it Lawrence, after you. To send it to you now is incredible for me, I want to show you I’m thankful. You gave me something to love, or in other words you gave me love itself. You took something that can sometimes feel so common and dull and brought it back to life with so much beauty and verse. You gave me happiness, and you still do.