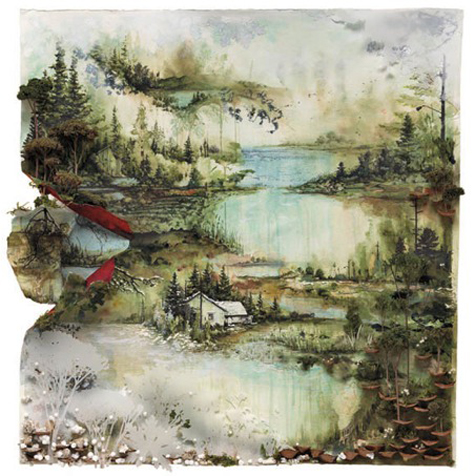 After watching Justin Vernon make guest appearances with The National AND Kanye West this past weekend at Coachella 2011, it is no surprise that the man with the beautiful voice is back announcing a brand new LP.Â  On June 21, Bon Iver will finally return with new music via Jagjaguwar in the form of his self-titled sophomore album.

Vernon and brother Nate recorded and mixed the album over a three-year period at a former veterinarian’s clinic in Wisconsin and features collaborations from Sean Carey, Mike Noyce, and Matt McCaughan playing, singing, and contributed production to the album. Volcano Choir members Jim Schoenecker and Tom Wincek helped out with processing, and Rob Moose, who has worked with the National and Antony and the Johnsons, helped arrange strings. The LP also features pedal steel player Greg Leisz and a horn section that includes Mike Lewis, C.J. Camerieri, and free-jazz monster Colin Stetson. The inspiring cover art comes courtesy of Minnesota artist Gregory Euclide.

If you are as excited as we are then feast your eyes on the tracklist and album preview below and start to salivate!