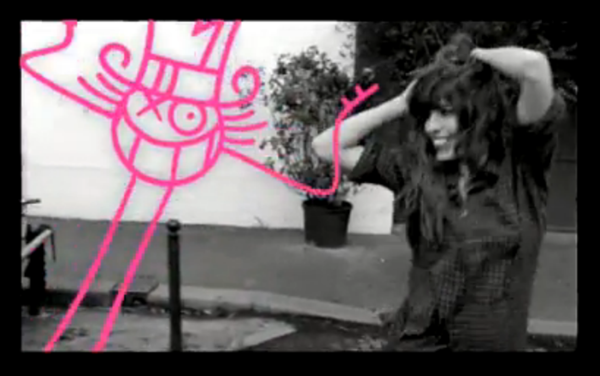 I really do enjoy the Cazal’s musically, but they aren’t the prettiest to look at so I thought I’d post another great song which happens to have an equally great video. There’s a lot of hubbub about this video, and with just cause. The woman dancing in the video is famous French actress Lou Doillon, and the graffiti stick man she is dancing with is Mr. A by famous French artist Andre. Andre is king of the scene in Paris, and owns a couple clubs, a restaurant and hotel. The hotel, named Amour i have had the pleasure of staying in a couple of times, and it is really a very chic boutique hotel.

Amour use to be a pay-by-the-hour hotel located in the Red Light district which has been completely renovated and decorate by Andre. In fact he has his own room in the hotel which you can not rent because it is exclusively held on reserve for him incase he wants to crash and is full of designer toys. It is a terrific place, I will probably stay there again this year.