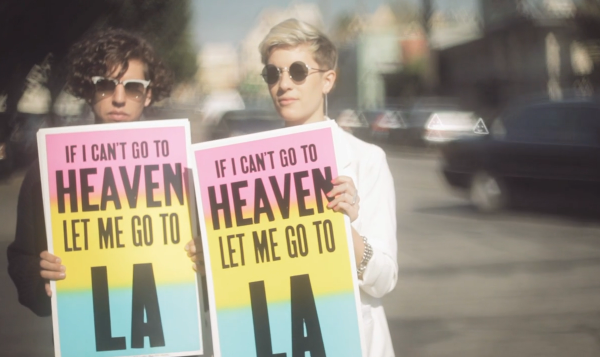 YACHT’s latest video for “Shangri-La” was shot entirely in L.A. with a crew of YACHT fans dressed entirely in white, often in the shape of a triangle.

They had this to say in the Brandon Vedder directed video’s bio:

You can’t spell Shangri-La without L.A.

Shangri-La features dozens of extended members of the YACHT family–fans, collaborators, friends–sharing a space of our own invention, spotted with magical realism. Every point of light smiles. YACHT believes that Utopia, like reality, is not a physical experience, nor one dictated by the boundaries of a particular space. Rather, it’s a movable feast, defined by its capacity to adapt and change to new surroundings.

Basically, any place can be Utopia.

But it doesn’t hurt when that place is already Los Angeles.

Shangri-La was made in collaboration with All Cut Up Films. Brandon Vedder directed and edited it, and Colin Mika was the director of photography and colorist. We, YACHT, produced and styled.

They’ll be in Toronto next Thursday with local band Bravestation opening. Watch one of their best video’s yet below. Go Team YACHT!