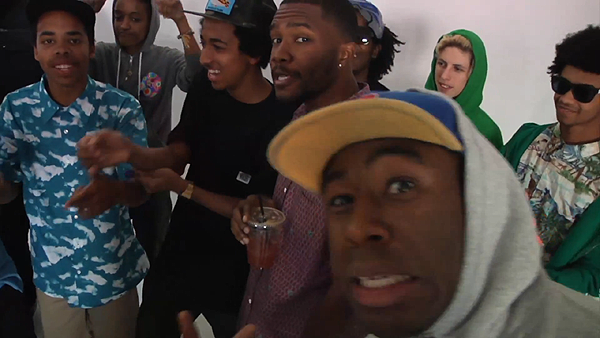 Take a look at this! The ENTIRE OFWGKTA have released the video for their standout group track “Oldie” off of the OF Tape Vol. 2 album.  The video was shot in the middle of a photoshoot with famed photographer Terry Richardson, when the group decided to film themselves rapping their verses. Definitely part of the charm of the video is that the group is so natural together that they often forget their lines, get distracted, and act the fool. The track is literally ten minutes long and features EVERYONE, even their sideline crew. A special treat for me, as always, is seeing Frank Ocean with the crew, and even more than that seeing him rap with the crew. The other added bonus is when Earl Sweatshirt steps up to drop his verse, and everyone watching him with almost awe. It’s a great video, watch it below.