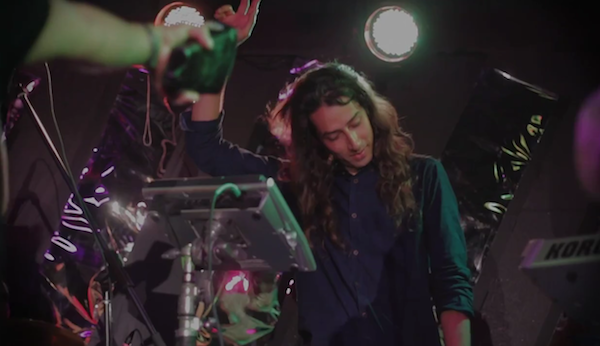 Kindness has released a new video with Trouble Funk filmed at a live show in Washington DC last month.

It comes with a lengthy statement from frontman Adam Bainbridge about the making of the video, so without further adieu, we’ll let him preface the video:

“Hello, my name is Adam. I make music under the name of Kindness. The below explains a little about the video we have just made for “That’s Alright.”

“That’s Alright” is almost entirely based upon samples from the Trouble Funk song “Still Smokin.” Trouble Funk are a go-go group from Washington DC, who have existed in one form or another since 1978, and previous to that as a more straightforwardly r’n’b oriented act called the Trouble Band.

Go-go has been on my radar since Rich Harrison first started putting out incredible songs with a go-go influence. As a DC area native, Harrison knew well the urgency and vitality of go-go, and its unswervable effect on an audience. Hence his use of go-go breaks in “Crazy in Love” by Beyonce, “One Thing” by Amerie and “Take this Ring” by Toni Braxton.

In clearing a sample for use in a song, you have to send a copy to the original writers for approval and publishing clearance. So I knew that Trouble Funk ought to have heard the song already. For that reason I thought we might try and take things a step further. Would the band perhaps be interested in performing the new version of their song for the video? And could they find me something to do?

My flight into Washington DC was sadly delayed. The rehearsal which was due to be our first meeting went ahead without me. In fact, the first time we got up together on stage was shortly before the doors opened at the U Street Music Hall, in the heart of Washington, a short stroll from the White House.

Playing with Trouble will remain one of the most awe-inspiring experiences of my life. Bands like these are few and far between. I hope we manage to capture something of the musicality and vibrancy of the go-go scene, and cement a little more the legacy of the incredible players, song writers and talents who compose these bands – those still gigging, moving a crowd and finding that sweet ‘socket’ together.

We’re in the process of putting together a documentary piece to accompany this video – between them, Big Tony and Tee Bone, both founder members of Trouble Funk have 68 years of playing time under their belts, and that’s with this one band alone. They tell the story of go-go better than I can, and those with an interest in what they’re doing should reach out to them directly.

In the meantime, please enjoy “That’s Alright,” as performed by the band that inspired it, with a slightly overwhelmed Brit at the back of the stage.