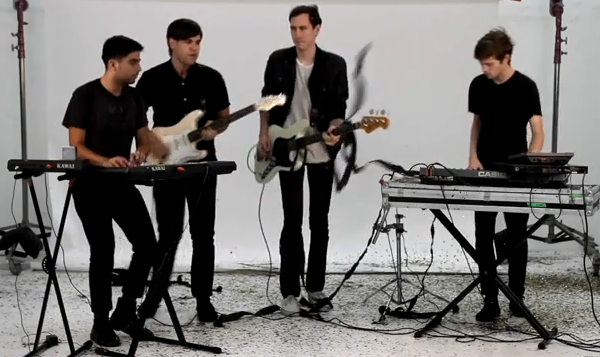 Upon closer inspection, LA electronic rockers Abe Vigoda aren’t anything new, which is why we were sort of surprised to see them billed as the opener for the one year old, one man band Wild Nothing in February when they’ll play Toronto’s Wrongbar.

If only to better educate ourselves before the much anticipated show next month, it seems what they lack, keeping them safely below the radar is a kind of consistency in musical style. With three full lengths out in the past five years leading up to their current album Crush, the band flip flopped between gothic rock, tropical, and back to electronic for the current release which dropped back in September when they began touring alongside the heavily buzzed lo-fiers Wild Nothing.

They have been able to fearlessly explore different styles with each album, growing leaps and bounds musically, while other artists change their sound only slightly with each release, worried about losing fans if they change anything drastically. It seems as if Abe Vigoda only want to have fun, play music, and keep on moving, and they’ve certainly caught our attention at this point. Check out the video for “Throwing Shade” below and if you like what you hear, catch them live next month at Wrongbar.