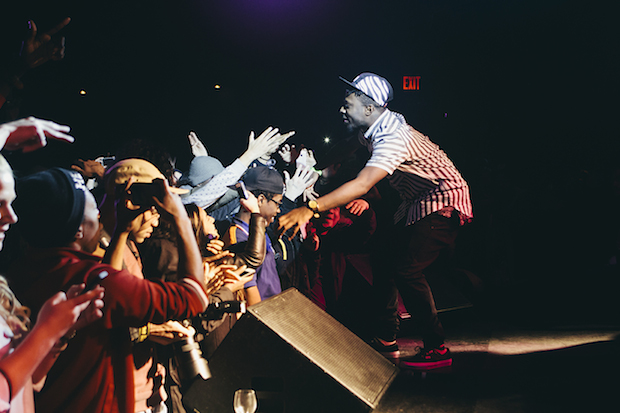 “You really just ruined my childhood,” Isaiah Rashad joked with us as he stared at creepy renditions of some of his favourite cartoon characters at Design Exchange’s This Is Not A Toy exhibit. “Haha. I might really have some nightmares about these.” Isaiah likes cartoons, especially Sponge Bob Squarepants. His mouth dropped when he saw the huge Spongebob x KAWS painting. We told him it belonged to Pharrell Williams and he took in all the detail for a few minutes before moving on.

Having gotten his passport just in time to head to Toronto, it was evident that Rashad would have to get used to travelling, since he would be touring with TDE labelmate Schoolboy Q following this trip. We finally managed to grab his attention back from the art long enough to sit him down and chat. The camera crew was buzzing with excitement and even a few Design Exhange executives came by to listen in on our interview.

Isaiah sat tentatively re-twisting his hair, slightly nervous, as we got the camera angles set up. Twenty minutes later the whole thing was over and we all piled into one cab and headed to sound check. On the ride over we chatted with his manager while Isaiah called his phone provider religiously, trying to get a decent data plan. “I’m from Tennessee but I’m in Canada right now,” he tried to explain his situation to whoever was on the line while his manager tried to find out the wi-fi situation at Tattoo Toronto, where the show was going down in just a few hours.

At sound check everyone seemed to be running on adrenaline. Rashad hand picked which songs he wanted to run through and made last minute set changes. While he had mentioned to us that he had never performed ‘Cilvia Demo’ live before he brought something else to our attention while he sat on stage, “I never thought about performing these songs live when I wrote them.” The small crowd of production crew and a few others stopped to listen, some even rapped along to tracks like ‘Modest’ and ‘Banana.’

During the show, Isaiah stood by the stage watching his opener wrap up and stared at the crowd in amazement. He was in appreciative awe when he hit that stage. Giving us his all, he reached (literally) as many fans as he could and ran around the stage with the energy you would expect from a seasoned performer. Killing all the expected tracks off ‘Cilvia Demo,’ Zay pulled a few curve balls by performing the melodic ‘West Savannah’ and unfinished track  ‘2x Pills.’ Afterwards we overheard his manager tell the venue’s talent buyer, “Congratulations. You got the first ever Isaiah Rashad show.”

Looks like Toronto popped Isaiah Rashad’s cherry in a few ways. His first time outside of the United States, his first headlining show and the first time he performed ‘Cilvia Demo’ live. We see a bright future for Zay and are happy we were able to catch it from the jump.

Check out our full interview with him here.