‘Minyades’ at The Bonnier Gallery for Miami Art Week 2021 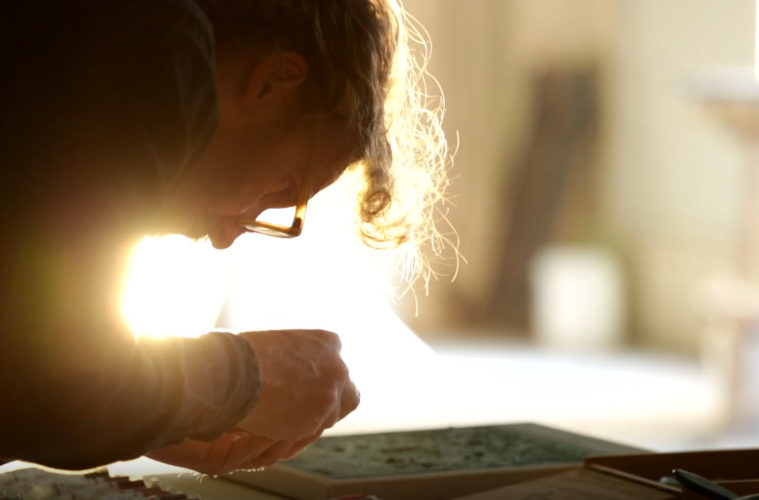 Miami Art Week is currently underway, and one must-see show is Minyades at The Bonnier Gallery, which opens on December 2. The show features pieces by Carl Andre and Richard Höglund.

Andre’s 1990 Pyramus and Thisbe sculpture was the starting point for The Bonnier Gallery’s owner and curator, Grant Bonnier. In November 2020, Bonnier reached out to Höglund to see if he would be interested in building on the Greek mythology around The Daughters of Minyas, to create something that would coincide with Andre’s sculpture. Höglund agreed, and the two worked out the components over video chats and email.

Included in the show is an essay about Höglund’s work, penned by renowned art writer, gallerist, and curator, Jill Silverman van Coenegrachts, plus text from Benoît Antille, and limited-edition copper plate etchings on BFK Rives paper (15 3/8 x 15 3/8 inches). Each of the 17 boxed sets features five prints corresponding to Höglund’s paintings. These were printed at Les Ateliers Moret, the revered etching studio in Paris.

In Pyramus and Thisbe (1990), Andre plays tribute to the poem, Metamorphoses, published by the Roman poet Ovid in 8 AD. It captures the story of two lovers (Pyramus and Thisbe) separated by their scornful fathers who despise each other, so the lovers can only communicate through a crack in the wall which connects their houses. Andre’s wooden sculpture is 36 x 36 x 120 inches and serves as a strong component of the Minyades show. The sculpture has only been previously exhibited to the public twice before, once in New York, and once in Los Angeles. 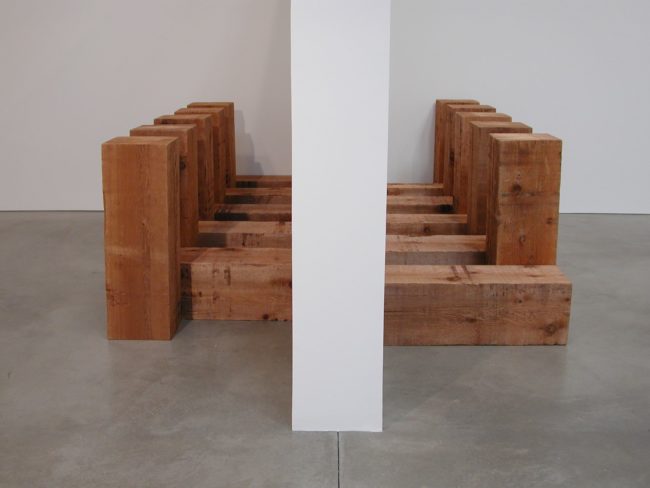 Minyades draws on the Greek mythology of The Daughters of Minyas, in which three sisters refuse to adore the Greek God, Dionysus, and instead are punished and go mad.

“It’s a nested story within a greater story,” says Höglund. “It’s three different stories of women with totally different ambiances, and they are trying to pass time by telling intriguing stories. And that intrigue gives wear to the deep seeded passions we all have.” 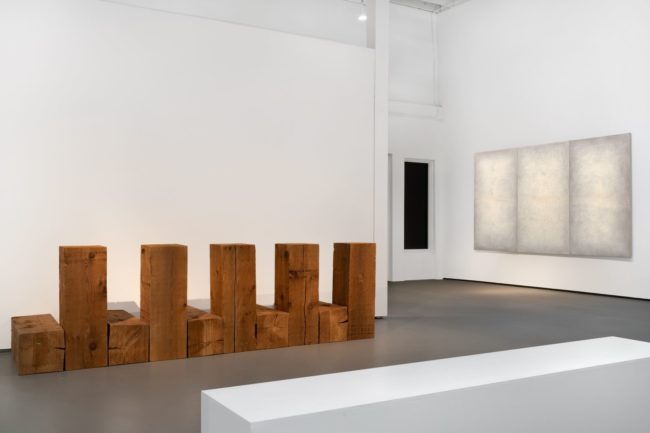 ​Inside the gallery sits Höglund ‘s five oil on linen paintings. These new works are underscored in silverpoint​ and are among some of the largest silverpoint drawings ever made, according​ to​ The Bonnier Gallery.

“The difficulties of taking the traditionally intimate medium of silverpoint and using it to make such large paintings, led me to explore many other different materials in the pursuit of ideal surfaces,” says Höglund. 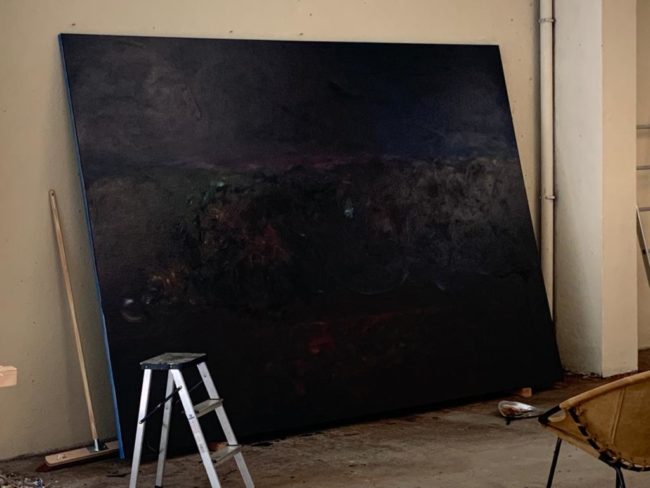 “This was the first time I mixed marble and bone together instead of using each in different zones of the painting.”

He also used dragon’s blood, a bright red resin which comes from a distinct plant genera. It was used for dye and medicine in ancient times. But this vegetable extract is complicated to work with, he says.

“It is a fantastic, very intense red, and if juxtaposed with the right coats, it can be incredible. All this material is what makes painting a lasting and interesting process; you take things from the world and you make something out of it,” says Höglund, adding, “Painting is a precise act that tells a lot about the human condition.”

Höglund says he found himself researching and conducting pigment experiments, while also looking at geometric models from different Egyptian artifacts. He became invested in the history of Western painting.

“If you go through any picture gallery in the world, looking at the history of Western painting, you have sources, literal things, that are influenced by this text,” says Höglund.

He remained true in his adoration for drawing, too, which, he says, is “utterly essential think between your mind and the world.” Every painting starts with him drawing and tracing first. As mentioned, the show also comes with a selection of Höglund’s etchings. 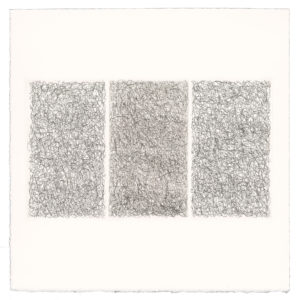 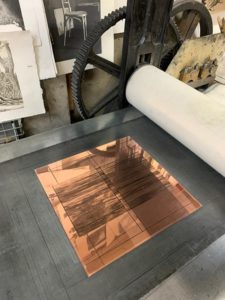 Höglund says this show is a synthesis of everything he has wanted to put into picture making, including the philosophical aspect, classical stories, drawing, and painting.

Creating for the time

Höglund, his wife, and two children relocated to the countryside in France’s Loire Valley in September 2019. In February 2020, they were supposed to go back to visit London, but Höglund says he got a gut feeling not to go, so he cancelled the trip. This served the family well since “we could have been stuck there until June,” he says. Instead, he had a lot of land in France. He painted in a converted tractor garage while his kids played in the open air.

“It was great. There was real solitude because no one was doing anything. No one was asking me for work, so I could just focus on making this and making what I wanted to make. There was no financial aspect attached,” says Höglund.

The pandemic stirred up unsettling pain and worry in all of us. Höglund tapped into those feelings by also indulging in the thought of death.

“I think death underwrites all artistic function,” says Höglund, but “there’s a heavier hanging notion of death than there was before.”

He says there is an “excessive melancholy and great paranoia about the natural fear of death,” which has a high impact on the way we are working.

“That’s why these classic stories renew themselves with such strength, because the themes are universal,” he adds.

Höglund’s time in the studio ends up reflecting what he’s living, reading, and thinking about — it’s never just one thing.

In his Bacchanale I painting, there is a real sense of darkness and a loss of control, which he says “could be sad, could be a nightmare, could be a memory, or flashes of light. And I wanted to make it reflect that darkness.”

The Bonnier family of Europe, famous for publishing the first works by August Strindberg, has been renowned publishers of fine arts books since 1837. Grant’s father is Peder Bonnier, a notable Manhattan gallerist who is most associated with the minimalist era (1960-1970) in New York.

Bonnier says he is grateful for the experiences that shaped his upbringing. And he wanted to continue the long tradition by creating something that would contribute to the art community in Miami.

“Most people feel poetry and art are difficult worlds to access. It’s been my experience that most people just need someone to give them permission and say, ‘this is for you.’ That’s what we stand for,” says Bonnier.

Although, he says, “Miami is a hard nut to crack,” because the rich art scene tends to “get overlooked by all the chaos of Art Basel,” and it can’t be taken in during one visit.

Bonnier recommends art-goers venture to Oolite, Fountainhead, and Bakehouse, while also checking out the private collections at Rubell Museum and Margulies Warehouse, as well as head to “institutions like ICA and The Bass.”

Bonnier says minimalism is a huge part of the program and his own aesthetic, but it rarely dictates his choices for what works to present in a show.

“I tend to focus on a simple element: does it move me? Is there an organic quality to the world that makes me want to keep digging there for a significant amount of time. If the answer is yes, we’ll show it,” says Bonnier.

There is a rich retrospect in Minyades which is beguiling and provoking, reminding of the strain and isolation humans have collectively felt as we’ve waded through the pandemic. It is also a call-to-action.

“It’s a tricky time, but we have to question what is human and realize what is taking away our joy. We’ve become miserable, with psychological problems, with online abuse — it’s highly problematic,” says Höglund.

Höglund wants people to remember that human interaction and nature are things to be vocal about.

“When you go out in the world, put your finger in the moss, sit across the table and engage with people instead of making content for social media and hoping that the echo box will provide you some light,” he says. “I am trying to teach my children to dig their hands in the dirt and get dirty fingernails.”