The Best Looks from the Met Gala 2019 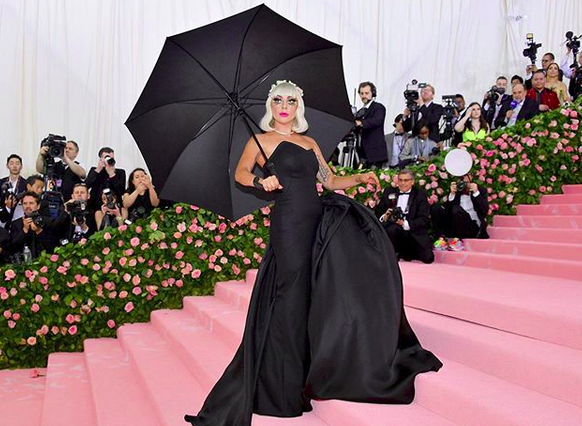 Anna Wintour’s annual invite-only fashion event, the one that brings out artistry, eccentricity and spectacle, is what makes the first Monday in May one to watch. The 2019 theme was Camp: Notes on Fashion, and the co-chairs for the evening were Harry Styles, Lady Gaga, Alessandro Michele and Serena Williams.

Susan Sontag’s 1964 essay entitled “Notes on ‘Camp” serves as this year’s reference check, with exploration into irony, humour, artifice, exaggeration—is it any wonder Lady Gaga opened the night with a 10-minute theatrical performance that’s never been done before?

Some celebrities like Gwyneth Paltrow and Emma Stone (whose jumpsuit was killer no less) ignored the theme, or so says the critics, while others like Billy Porter embraced and flaunted the camp narrative.

The event also opens the exhibition (May 8 – September 8) at the Metropolitan Museum of Art, which sees over 250 objects from 17th century to present day honouring camp’s visual and contextual underpinnings. Sontag’s essay, after all, defined camp as the “love of the unnatural…style at the expense of content” which can really leave the door open for interpretation.

Here are our favourite interpretations. 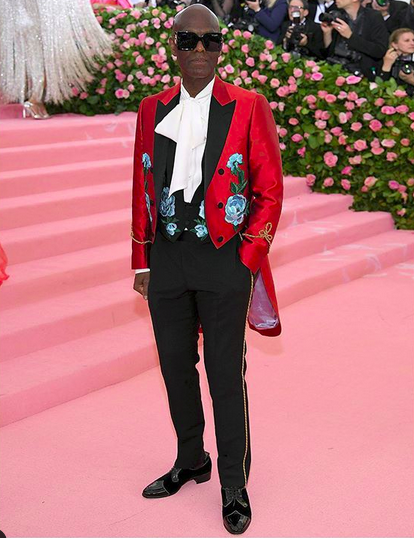 As per Gucci, Dapper Dan was dressed in a Gucci shantung silk evening tuxedo tail jacket and piquet waistcoat featuring floral embroideries and torchon detail. The trousers had side torchon detail. He finished it off with velvet and patent leather lace-ups with gold detail and square frame sunglasses. 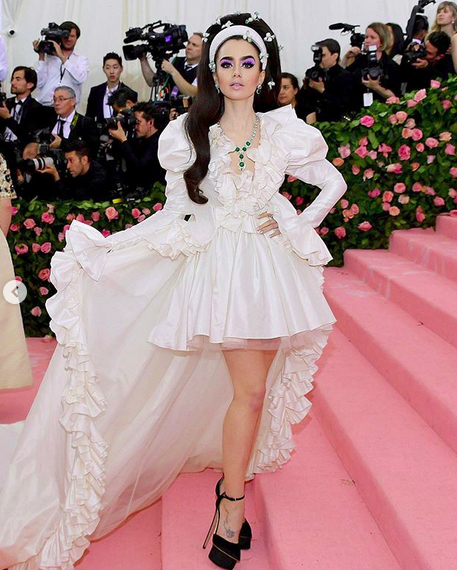 Lily Collins was one of our favourites last year, and this year she stunned again—Cartier jewels and all. 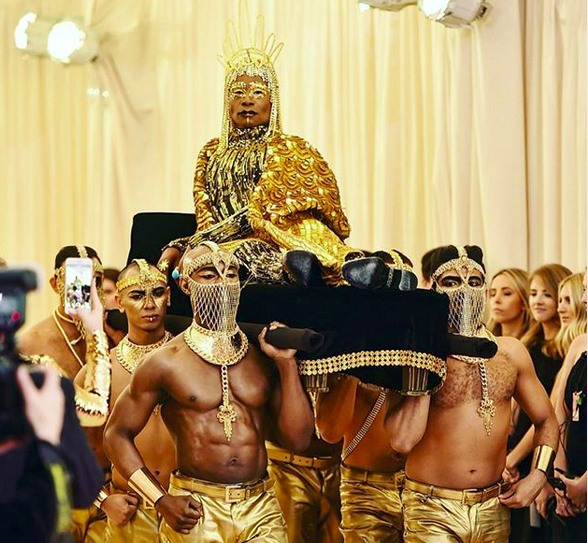 We had been watching the pre-coverage of the event which came with a lot of speculation around what Pose‘s Billy Porter would do. “Egypt” was a word tossed around and when Porter came out in a gold sequined jumpsuit and matching cape to boot, well, Egypt was really a good clue to give. The Blonds custom made this ensemble for the star, including the sequined headpiece. His shoes were designed by Giuseppe Zanotti. 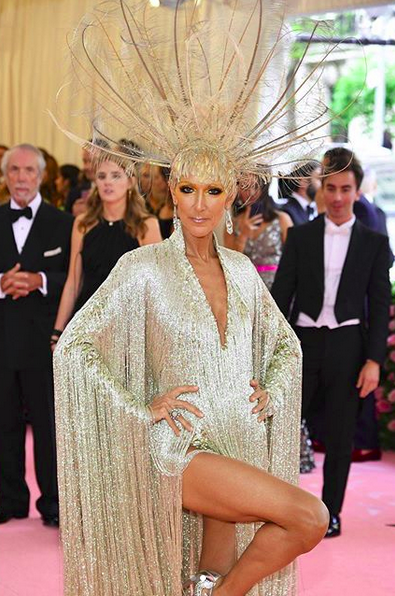 On the red carpet Dion said she had initially thought everyone would be sleeping over, you know like camping, but after she realized this was not the theme, she pulled out as showstopping Oscar de la Renta ensemble that weighed 22 pounds. Apparently this is what 18 panels of hand beaded embroidery and 3,000 hours of work looks like. 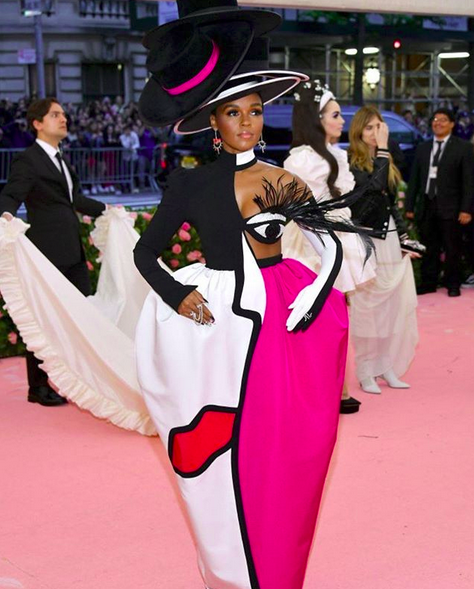 She always shows up, sometimes in refined elegance, sometimes in playful abundance, but always sharp. The singer’s look was put together by the talented Christian Siriano. Monáe’s stylist told Variety they ended up sifting through 15 sketches from Siriano before deciding on the look above. 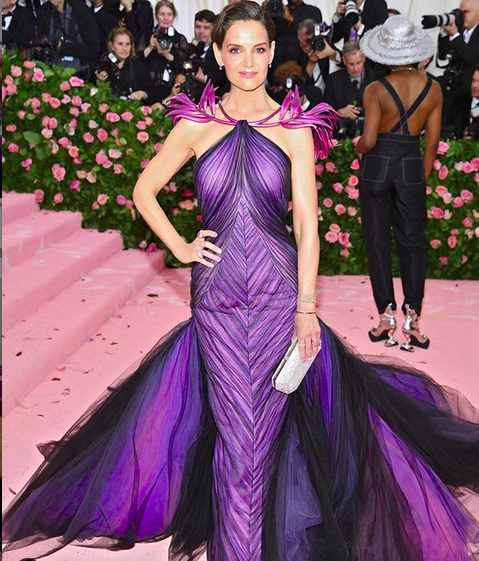 Katie Holmes looked stunning in her gown designed by Zac Posen. Her and Jamie Foxx donned Posen looks and all three rode together to the event. People reports that the gown was made of 300 yards of multilayered, hand-sewn colored tulle, and she wore Lorraine Schwartz jewelry paired with a Tyler Ellis Clutch.

When we saw the country star’s Twitter with a Barbie beauty stand and chair, we knew it was a hint, but it wasn’t until she showed up platinum blonde and in true Barbie form — pink and slick — that we really got it. Opting to get decked out in Moschino was a great choice.

Lupita Nyong’o made her presence known, too.

Four more wins of the night.

After the gala the parties ensued and Katy Perry was one of the names gaining attention for her burger getup designed by Jeremy Scott, Celine Dion was a fan. The Moschino designer and Perry tossed in the earlier enchanting look (which had the star feeling very Beauty and the Beast-y) and saddled up for a new exaggerated look, one that Scott pushed for. The famed designer said he was “thinking about how at the end of the ball everyone is ready to kick off their heels, toss off their corsets and east some junk food,” in an interview with Vogue. “I thought what could be cuter than Katy wearing a sequined burger cape with a tiny little ruched lettuce dress underneath!”

And before the ball, Perry subtly posted the below photos with the caption “First we set the table, and then we dine.”

Sticking with the after-party scene, Vogue also reported that a main starting point for many of the stars was the party hosted by Gucci’s Alessandro Michele, held at…Hunter College. But it was close by, and housed the likes of Ashley Graham, Bette Midler, Alexander Skarsgård, Sienna Miller, Jared Leto and Harry Styles.

Rihanna, while not in attendance for either the Met Gala or its after blitz, gave her vote for best dressed of the night. Wintour’s dress was designed by Karl Lagerfeld before his passing. 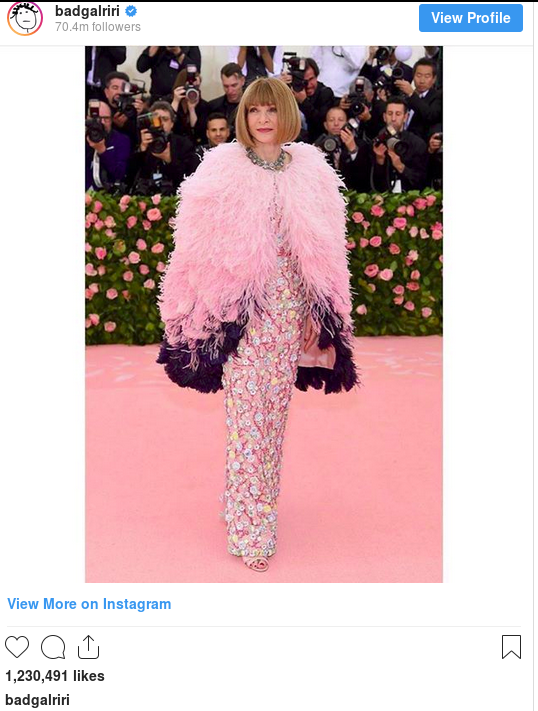 And in case you want to relive Gaga’s transformation:

Now, here are some of the day-after photos from the night that we’re gawking through. 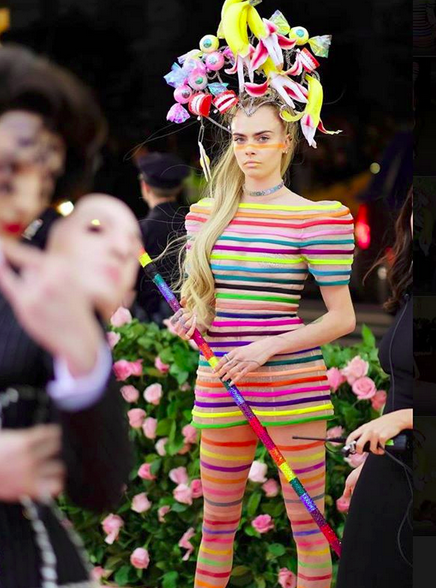 Zsa Zsa and Liberace had an amazing time at The Met Ball. What a fun inclusive night it was. One of my fav moments of the night: leaving and walking down the pink carpet and marveling at the thousands of feathers and beads left behind.