Mercedes-Benz and James Cameron’s Avatar got together and made a car. Or, at least that’s what it seems like with the automaker’s latest concept vehicle showcased at CES 2020 in Las Vegas.

The biggest tech show in the world tends to have its share of wacky gizmos and vaporware, but concept vehicles have been wow factors at the show for several years. The AVTR is not just a peek into a possible future, but also a different sensibility over what it means to be in a vehicle that takes you places. Oh, and by the way, AVTR is an acronym; it doesn’t stand for “Avatar,” but rather “Advanced Vehicle Transformation.”

The 2009 film still stands up today as a spectacle in cinematopgraphy, and its story carried a strong theme of being one with the environment, much like Pandora was for the protagonists. Cameron and his Lightstorm Entertainment company were actively involved in designing this unique concept. 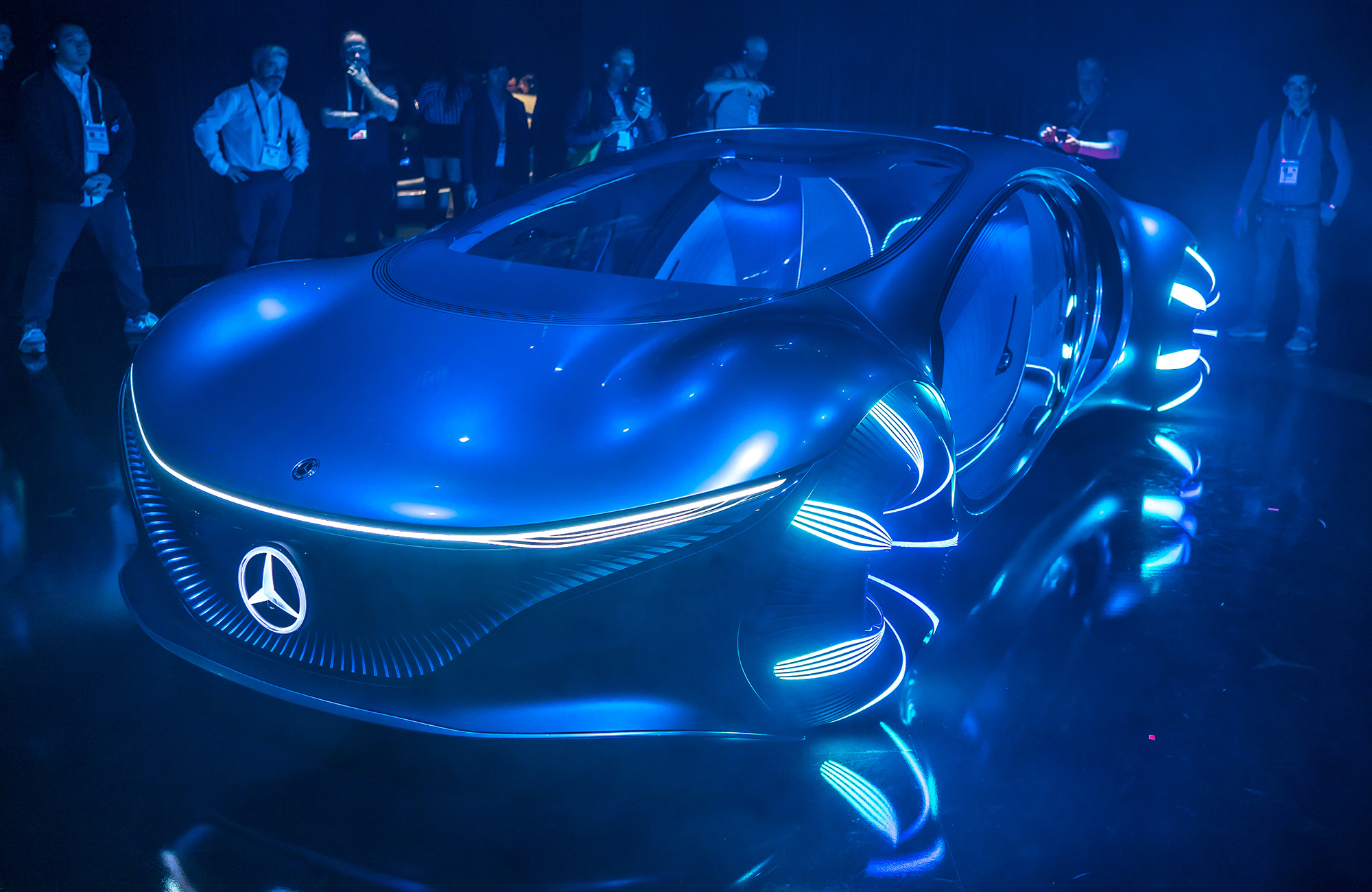 While undeniably sleek, it’s also got its proverbial claws. There is a little bit of Batmobile in this thing. Dare we say, it could have a little of Michael Keaton’s snazzy ride, coupled with the brute tank that was the one Christian Bale’s caped crusader wreaked havoc with. The wheels, which can change colour, can also shift to push the vehicle sideways up to 30-degrees. The back has 33 panels that open and close like scales on a reptile, giving it the aura of almost being a living thing unto itself.

Lights cascade across the frame and the interior like a show, yet it also sort of evokes the concept of a stream, or even a neural network that flows from outside to inside. Mercedes engineers and designers built both with synergy in mind, and biometrics act as the primary form of navigating everything you do inside. 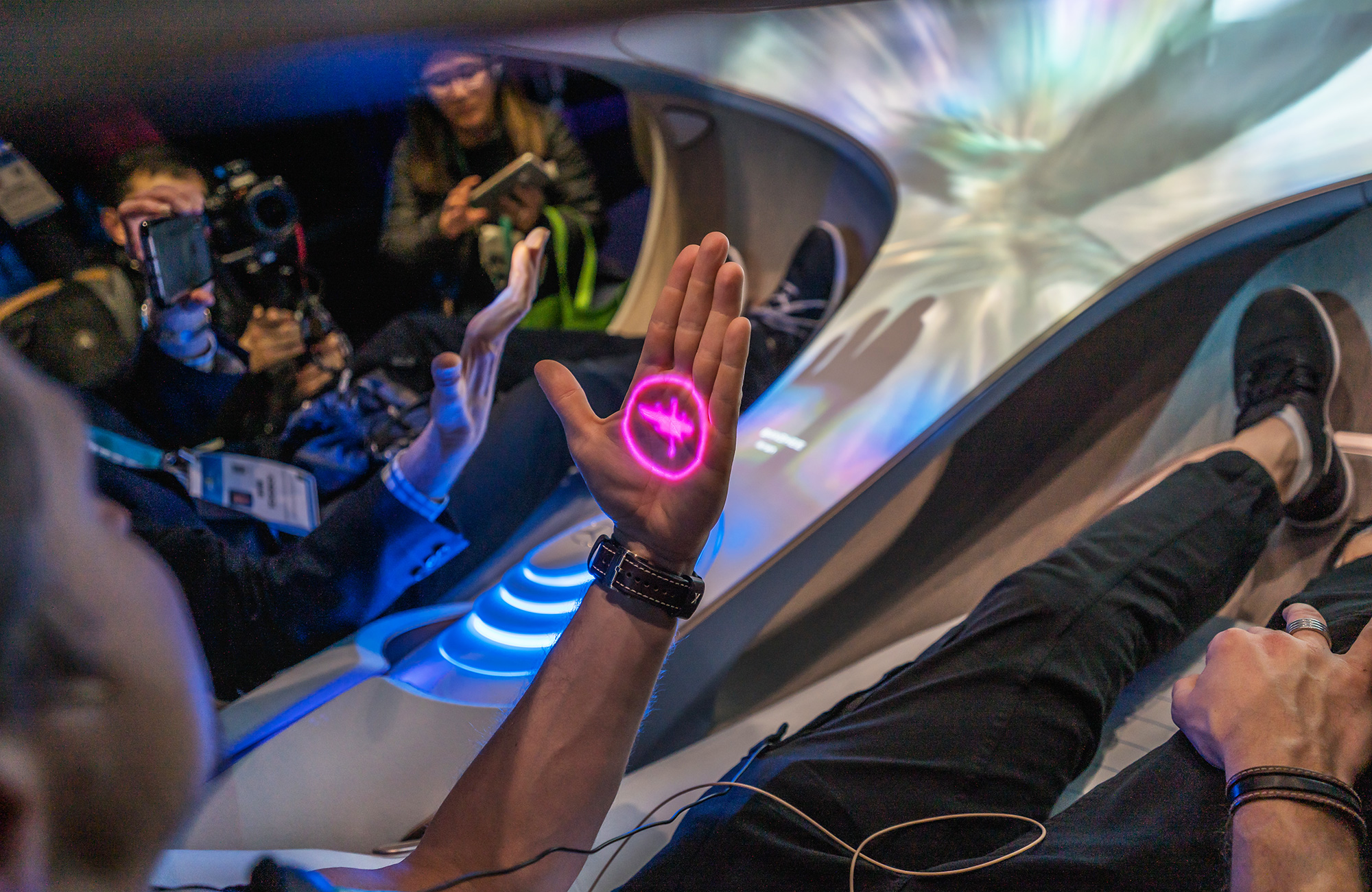 The whole dash and windshield are a screen. Forget the steering wheel, that’s long gone. Pedals, buttons, even touchscreens — all nowhere to be found. Instead, there’s a “multifunctional control element” in the middle console. Place your palm on it and the car comes to life like an animal awakening from a slumber. The car knows who touched the control element, and then serenades them with music and a nature scene to welcome them in. 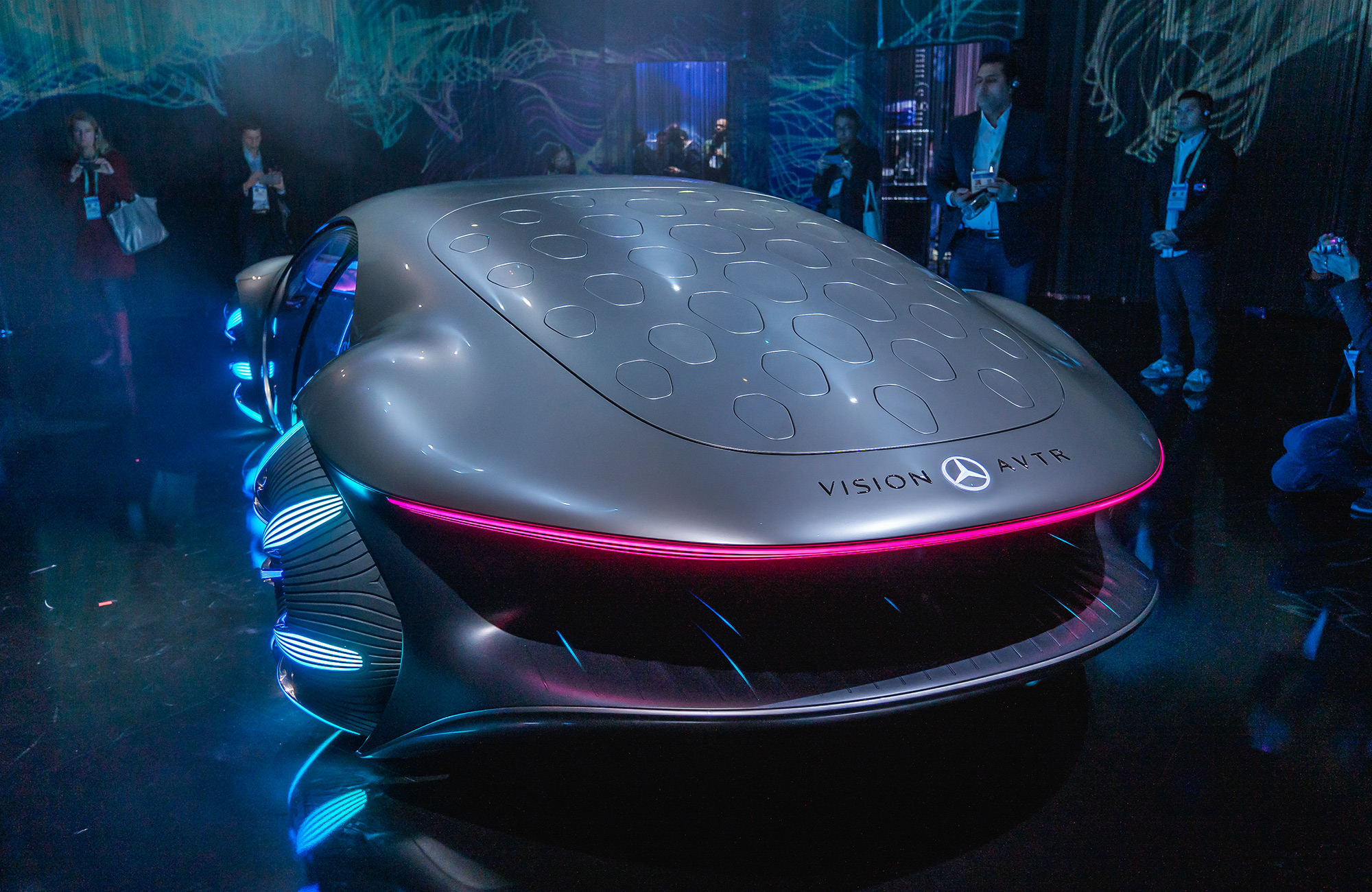 Icons will appear on your hand, and gesturing is the primary method to get the car to do what you want. We didn’t much in the way of voice control, but we figure that’s probably a given to include in something this radically different. The vegan leather seats on the inside look like the kind of seats you would lounge in holding a cocktail. And that’s kind of the point. If you don’t need to worry about the actual drive, kick back and entertain yourself.

As part of the conceptual framework behind the AVTR, the battery inside is made from organic materials that aren’t mined in conflict zones or use rare earth stones or metals. Free of emissions and anything derived from plants or animals, the car theoretically wouldn’t hurt the planet it rides in.

Needless to say, the AVTR is nowhere near becoming an actual marketable product. There won’t be an assembly line pumping these out anytime soon. It’s a pure concept of what the future might be like when people might feel a different connection to the tech they use. We’ll see how long it takes for that vision to play out, but as is, this vehicle was one of the coolest things to see at CES 2020.