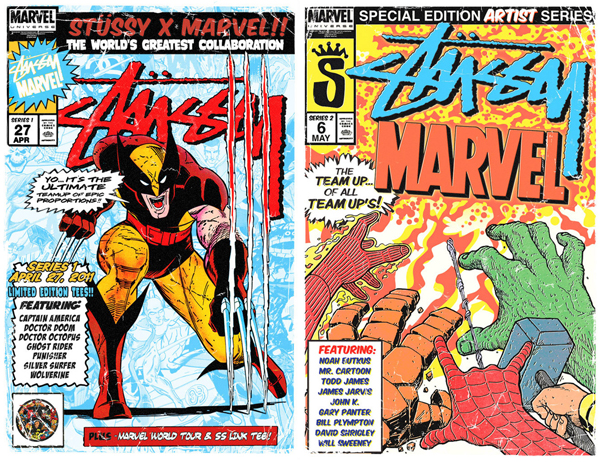 When two become one! Stussy has announced that they are teaming up with Marvel Comics for a super unique collaboration that takes classic characters from the comic universe. The line will be split up into two parts with Series 1, being released April 27, 2011, and featuring a collection of t-shirts and hats that fuse archival Marvel images with Stussy’s iconic graphic language. Apparently Stussy scoured comic books conventions, eBay, and local comic book stores for old issues with iconic classic covers that would mold well with Stussy’s design aesthetic. Scanned from the original comic books and rare collectors posters from the 1960’s  1990’s, the tee designs capture the essence of the characters, the texture of vintage comic books and the soulfulness of the Stussy brand. Series 2 will be released May 6, 2011, and consists of t-shirts and hats that feature new works by a pool of international artists, invited to revisit their childhood inspirations and interpret their favorites utilizing their signature styles. The Stussy x Marvel Project will be available at Stussy.com, Stussy Chapter Stores and select specialty accounts around the world.