Last weekend we bared the crowds for this years instalment of Chicago’s biggest Music Festival, Lollapalooza. The first of many years where the festival wasn’t threatened by rain or stormy weather with temps soaring high over the weekend at the beautiful Grant Park. The somewhat exhausting four-day fest was headlined by the likes of Travis Scott, Bruno Mars, The Weeknd, Arctic Monkeys and Jack White, and really kicked off on Thursday night for Travis Scott’s highly anticipated Astroworld pre-show.

Easing into the first day with an upbeat set from CHVRCHES before bouncing over to the Bud Light Stage for a set from Khalid who packed things out hard performing his care free tunes while rocking a Balenciaga t-shirt. Over at the shady American Eagle Stage, New York’s own A Boogie wit da Hoodie clad in head to toe Puma had the crowd amped to a point when various crowd members were climbing up trees for a better view-point.

We headed over to Virgil Abloh’s DJ set close to the Bud Light stage for a warm up before Travis Scott took the main stage. Behind massive light up cubes, Travis Scott performed his usual high energy set, jumping around on stage working through his many hits, yet somehow he managed to only perform a handful of new songs, working to engage the crowd with more familiar hits. Meanwhile over at the Grant Park stage Arctic Monkeys performed their new album Tranquility Base Hotel & Casino with ease as Alex Turner served up his usual swagger throughout.

With temperatures rising on day two, we headed straight to Tyler, The Creator’s oddly early set at the dusty Grant Park Stage. He rolled around on a speaker whilst performing to the end of his set and made fun of a kid who threw his shoe at him: “now you’re gonna be the dumb guy without a shoe!” We couldn’t miss Compton rapper Buddy performing on the BMI stage after catching his high-energy set back at SXSW, so we headed right over to watch him perform his debut album Harlan & Alondra almost in its entirety.

Following the rest of the crowd across Grant Park to see a few minutes of Post Malone’s set at Bud Light seemed like the right thing to do, especially since the craft beer tent was on the way. The crazy crowd moved like slow salmon swimming upstream but sight lines were unsurprisingly tough due to the massive crowd he pulled. Probably for the best since we were particularly amped for BROCKHAMPTON’s set after they cancelled their Governors Ball slot earlier this year. The crowd seemed hungry for the very full stage through their super bouncy set. Once again crowd members took turns climbing up trees for a better sightline.

We split our time between headliners Bruno Mars and The National (because really how can one choose?!), catching a bit of each set before ending the night a solid dance party to UK electro poppers JUNGLE.

Day three had us feeling seriously fatigued from all the walking between stages, but we rallied just in time for a “Gucci Gang” singalong with Lil Pump to get things flowing before the legendary LL Cool J commanded a huge crowd at the Bud Light stage. Backed by DJ Z-Trip his set featured an amazing crew of dancers, including one clad in solid gold, dollar bills flying around and roses at the end for all the ladies – class all the way LL. After that you know we had to go support our hometown hero Daniel Caesar. It seems like only yesterday he was performing low-key in Trinity Bellwoods, but the crowd he pulled said otherwise and we couldn’t have been prouder. Quickly back to Bud Light for the always epic St. Vincent who dazzled (as usual, duh) with her proficient guitar skills and mesmerizing yet somewhat disturbing visuals.

Time ticked slowly down to the rival headlining sets from the “weekends” playing on opposite sides of the park. We headed over to catch a few tracks from The Weeknd, who obviously had the larger Grant Park stage complete with a giant mask and hand sculpture. It was a fitting return to a much bigger stage after his headlining set back in 2015.

Forgoing the crazy crowd, we strolled over to the catch some much chiller Vampire Weekend vibes on the Bud Light Stage. It felt like ages since we’d heard them perform, and, in keeping with Ezra Koenig’s Beats One show Time Crisis, the set featured bits of hilarious banter, memes, and a full rendition of the Seinfeld theme song by Chris Baio during their cover of SBTRKT’s “New Dorp. New York.” on which Koenig is featured. Before leaving the stage, Koenig was sure to mention that they’d be back soon, announcing they had finished recording LP4 and that it was currently being mastered. Not sure about you, but we can’t wait to hear it!

Day four – looks like we made it! Arriving just in time to ease into the day with Toronto’s own Jessie Reyez, who increased intensity the entire set up till the end as she chanted “The #MeToo movement is not fucking new!” and proceeded to climb up the scaffolding just to make sure she was heard loud and clear. We couldn’t miss Kali Uchis in a white tassel two-piece performing per particularly chill brand of pop so we bolted over there right after. Her new album Isolation has been on loop for months now and we’re happy to report it lives up to the hype live.

The unofficial headliner of day four, Gucci Mane took the Bud Light stage in what most people would consider way too much Burberry (jacket, shirt, shorts, and yes, his boxers too). The crowd was fired up for the entire set and the fans didn’t stop pouring in after in preparation for Lil Uzi Vert’s set which followed.

We ended the night with Playboi Carti, Jack White, and a well-deserved Shake Shack burger. 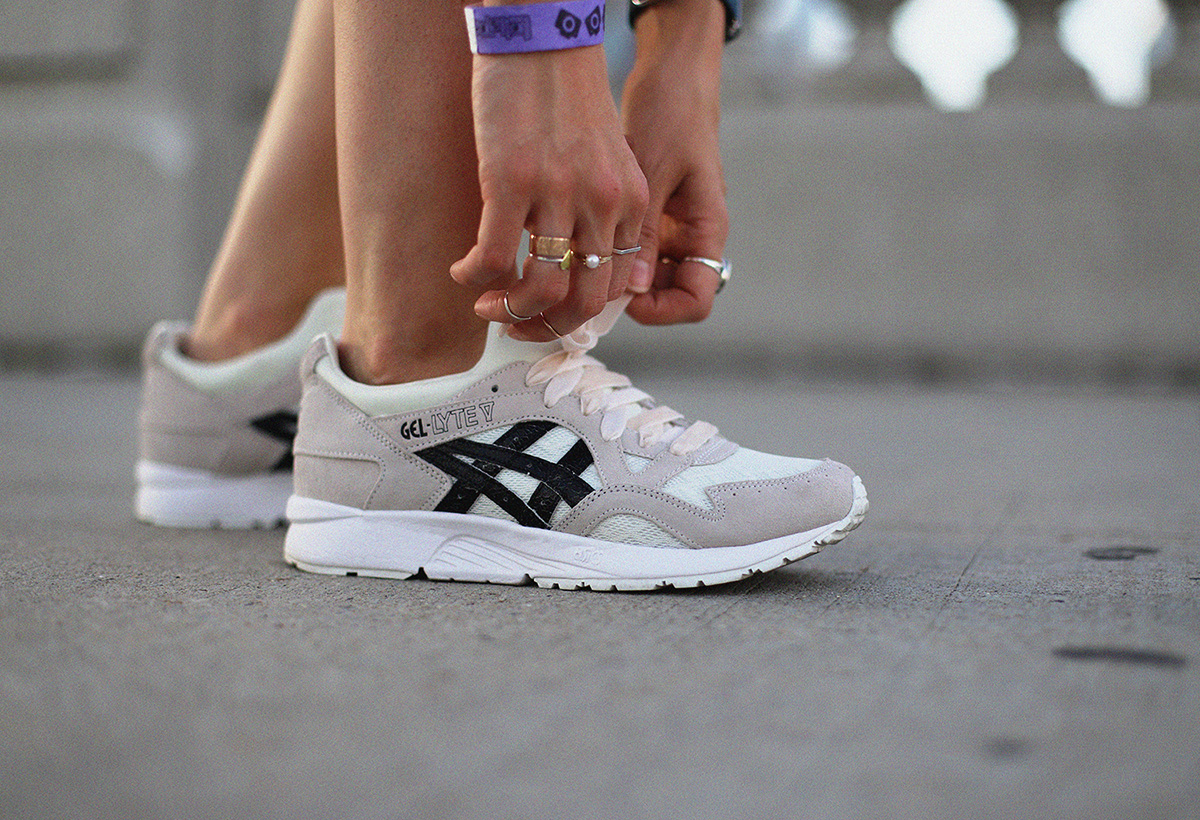 Special thanks to ASICS Canada for having us and keeping us outfitted all weekend long in the most comfortable kicks.