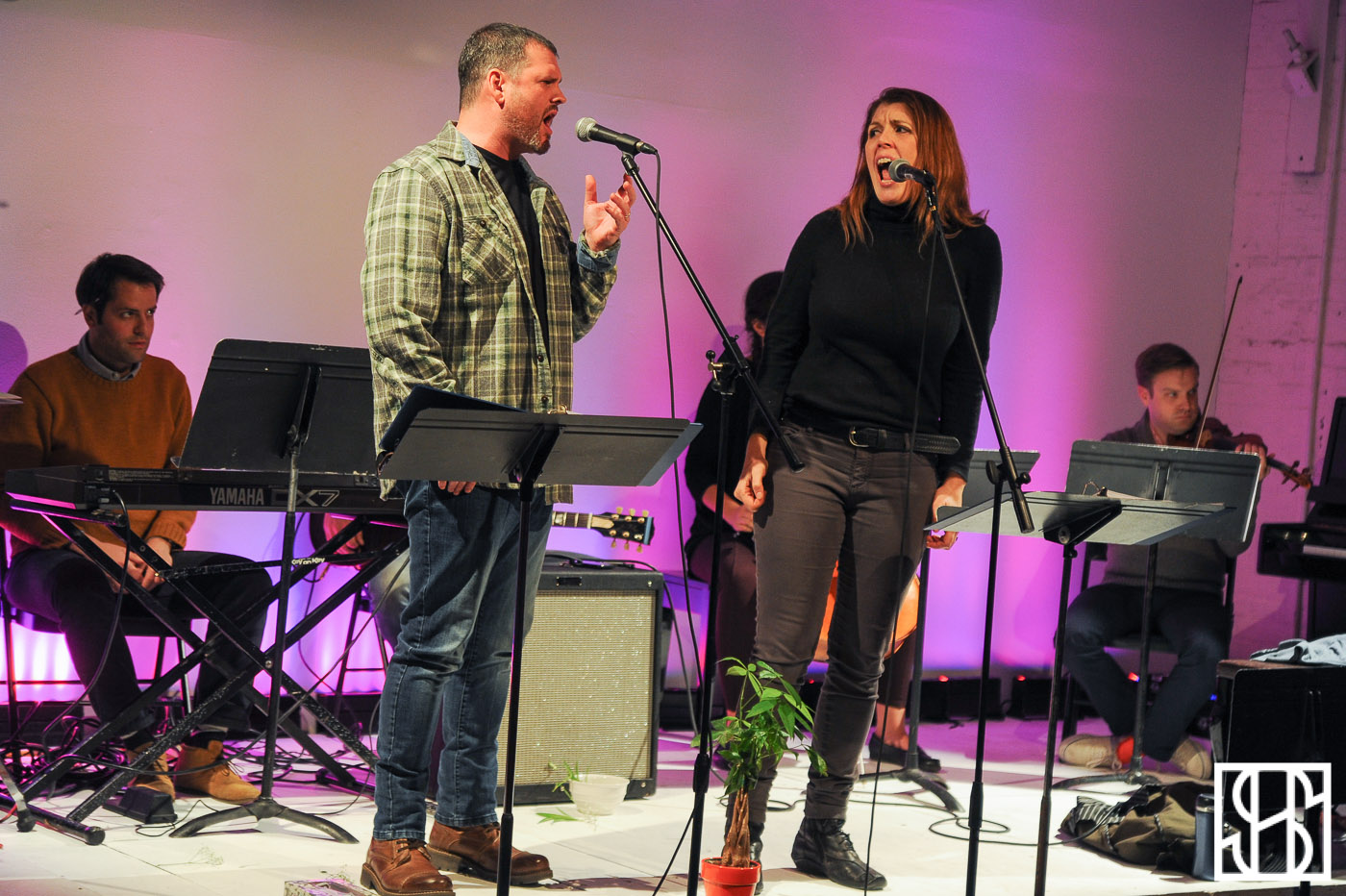 Punk meets opera certainly sounds like a strange pitch for a show, but that’s exactly the idea behind Tapestry New Opera Works’ production TAP:EX Metallurgy. The project is the result of collaboration with Jonah Falco and Mike Haliechuk from Toronto hardcore legends Fucked Up. “It’s weird to say opera meets punk, but strings and big voices have many places in music,” Falco says when we sit down at a rehearsal on Tuesday. He sees the opportunity as an excellent chance for him and Haliechuk to work outside their normal area of experience. Working with experienced opera singers mezzo-soprano Krisztina Szabó and tenor David Pomeroy, as well as composer Ivan Barbotin, librettist David James Brock, and conductor Jordan de Souza meant that they were truly diving head first into the real thing.

The opportunity came about from a chance meeting, Haliechuk DJ’d a party that Tapestry held for their 35th Anniversary and, as a result Falco was able to witness the TAP:EX event held last year. The idea of being able to actually compose a piece of music for an opera was a new experience and drew him in. Tapestry’s Artistic Director Michael Hidetoshi Mori saw the possibilities of the partnership as well. Since taking the helm at Tapestry he’s been working to bring a bit of the familiar to the sometimes alien world of opera. “A relationship with opera is like a relationship with someone who’s got baggage, if you let opera be what its stereotypes are,” jokes Mori. While most art forms continue to evolve as time goes on, Opera he feels is stuck at a point 80 years in the past and that can be something that really turns people outside the small circle of opera fans off. Tapestry has been committed to breaking that closed circle, and sees TAP:EX as an opportunity to mix audiences with other scenes. “If we’re going to be interested in something it’ll have to have a little bit of what we know and a little bit of what we don’t,” says Mori as he describes how previous TAP:EX events have led to renewed interest by people in the rest of their programming.


Metallurgy itself is an opera in two pieces, the first half spearheaded by Falco and Haliechuk, and the second by Brock and Barbotin. Interestingly the first half is more what you’d think of when opera comes to mind, a conceptual piece about grief and mourning of a lost loved one. The eight musicians on stage each have a moment to show their chops as the piece is slowly reduced to a showcase for the immense talent of Krisztina Szabó. In our interview Falco is effusive in praise for both her and Brock for their willingness to work with and invest in their material, despite this being his first time working with opera singers. While the production values on stage are fairly sparse, a few small props are the extent of it, special mention must be made of the absolutely stellar lighting design that utilized the entirety of the room and helped to set the atmosphere perfectly.

It is in the second half of the show that you can tell Barbotin and Brock truly let themselves have some fun. A much looser piece with a definite sense of adventurousness, it charts the ups and downs of a relationship through its entire life span, with Szabó and Brock in dialogue the entire piece. With several guitar parts for Haliechuk to sink his teeth into and a chance for Falco to get behind the drum kit, this feels like the genre crossover that Mori talked about. Pomeroy even gets the chance to shred his way through some classic rock on a Flying V, while a disco ball illuminates the room, very distant from what you might find at the Canadian Opera Company.

Both pieces truly give the impression of being something special, and as an opera virgin it was really the best possible way to be exposed to it. The show runs for another two days at the Ernest Balmer Studio in the Distillery District. A number of tickets were held aside as Pay What You Can for the Friday show, a nod to both Fucked Up and Long Winter. Both Mori and Falco believe it is important it to open up this culture to everyone who would want to come, regardless of cost, as an effort to break down the lingering class divide that seems to define opera. How successful TAP:EX is in the long run of drawing new fans from a punk audience remains to be seen, but as Mori joked at the end of our interview, “We’ve just given everybody in opera an excuse to say Fucked Up.”

Find some photos from the rehearsal we attended below: 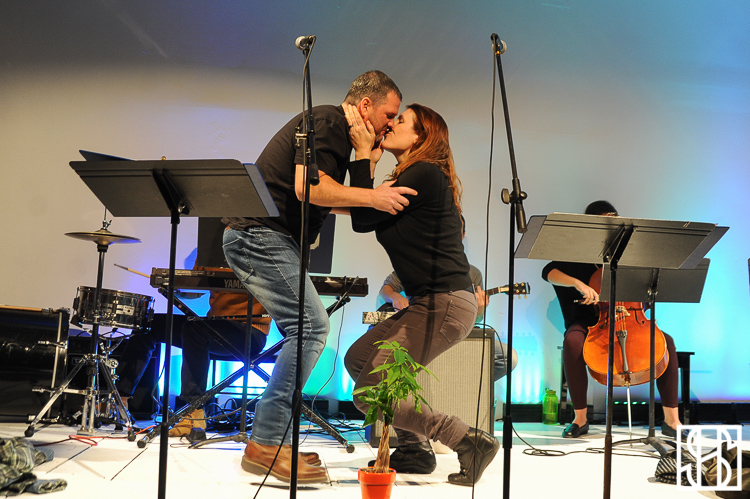 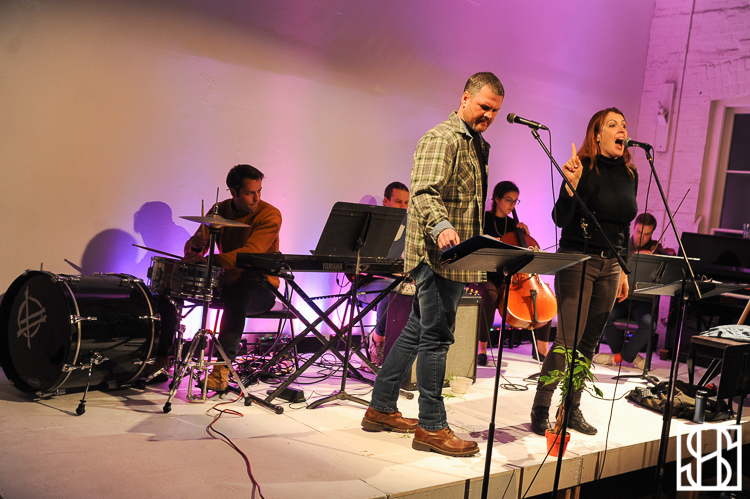 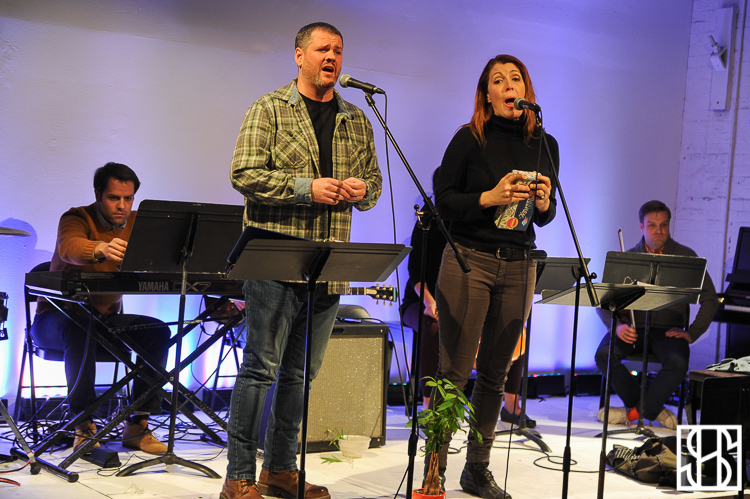 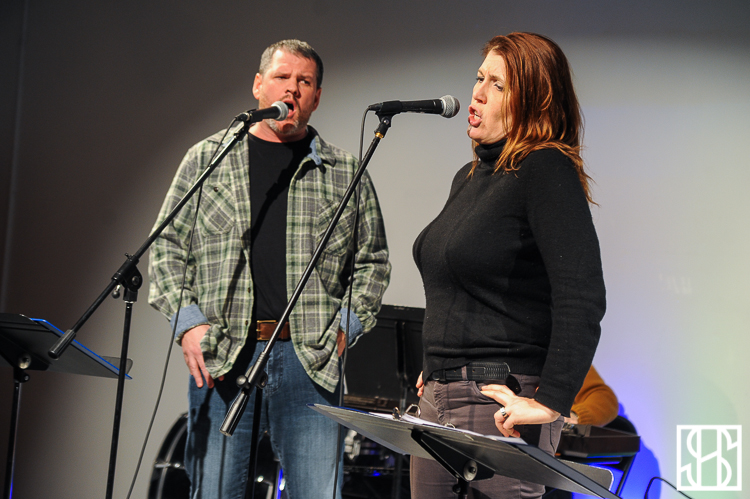